A team of archaeologists and other specialists in Egypt plan to open a sarcophagus containing a 3,000-year-old mummy on Sunday as part of a live Discovery Channel special called “Expedition Unknown: Egypt Live”.

The show will follow host Josh Gates, Egyptologist Zahi Hawass and secretary-general of the Supreme Council of Antiquities of Egypt, Mostafa Waziri, as they explore the tunnels and inner chambers of an excavation site outside the the city of Minya. What should you expect?

“Kind of the beauty of this is, I don’t know, and I think that’s the fun of it,” Gates told NPR’sHere & Now. “We know that there are a lot of mummies that are down there.”

Discovery said in a statement that the team had previously discovered a “mysterious limestone sarcophagus found buried deep within the complex,” and that “the identity of the mummy inside has been a mystery for 3,000 years… Possibly until now.”

The ancient Egyptians, who maintained dynasties from roughly 3,100 BCE to 30 BCE, had very particular beliefs about the soul’s ongoing connection to the body after death.

“[They] really believed they needed to be connected to their mortal world, and so along with being mummified themselves, they would often take with them a lot of personal objects from their life down into their tombs,” Gates told NPR. “I think we do have a real expectation that we’re going to be finding some really interesting relics and artifacts down there.” 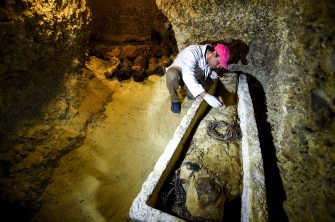 An archaeologist brushes a newly-discovered mummy laid inside a sarcophagus, part of a collection found in burial chambers dating to the Ptolemaic era (323-30 BC) at the necropolis of Tuna el-Gebel in Egypt’s southern Minya province, about 340 kilometres south of the capital Cairo, on February 2, 2019. Photo credit: MOHAMED EL-SHAHED / GETTY

The exact location of the excavation site, which is reported to have produced multiple recent discoveries, has not been revealed due to concerns of looters — a problem that has plagued the region for millennia. For example, the tomb of King Tutankhamen had been looted at least twice before it was opened in 1923 amid worldwide press coverage.

Gates said exploring the ancient tombs should be done with respect.

“I do think that the responsible thing to do in cases like this is to investigate and preserve and conserve the history of these places. But I do think you have to approach it with real reverence,” he told NPR. “I think we can’t forget that Egyptians did have a strong belief that their tombs needed to be protected, in a sense, and we are outsiders to that tomb.”

So, does opening the sarcophagus really warrant a two-hour TV special? It depends how you look at it.

“It’s a media spectacle in the end — but it could make people love antiquities and is a good promotional opportunity for tourism, if done right,” an Egyptian archeologist, who asked to remain anonymous, told AFP news agency.

Tags
archeologyegypthistorytelevision
In this article
archeologyegypthistorytelevision
Related
Hard Science
200 years of exploring Antarctica
What we’ve learning from the world’s coldest, most forbidding, and most peaceful continent.
High Culture
The most controversial painting in Russian history
Created in the 1880s, “Ivan the Terrible and His Son Ivan,” which depicts a father murdering his son, divides Russians to this day.
The Past
Ceramics, corn cobs, and other strange things we used before toilet paper
Some objects were softer than others.
Neuropsych
The trouble with medicating mental illness
Has the “age of psychopharmacology” shrunk society’s sense of responsibility for mental health?
Strange Maps
The great European house cat migration
Ancient bones reveal that domesticated felines were at home in Pre-Neolithic Poland around 8,000 years ago.
Up Next
High Culture
How storytelling gives life meaning
Since the advent of communication, humans have used stories to create meaningful lives.