Like a cycle that comes back around almost a thousand years later, modern terrorism has historical roots in a notorious sect of medieval assassins from Syria and Persia (modern-day Iran). In fact, the word “assassin” comes from “hashishin”, the Arabic nickname for this group’s most rabid followers, which meant “users of hashish” or “hashish addicts”. These drug-pumped young men would strike terror into  the hearts of the public by killing high-profile targets to further the political goals of the sect’s masters.

The sect was comprised of Nizari Ismailis, a group that split off from Ismailisim, a branch of Shia Islam, in the end of 11th century (around 1080). The “assassins” were founded by Hassan-i Sabbah, a radical missionary, who along with other leaders of the sect came to be evocatively-nicknamed “The Old Man of the Mountain”. Over the course of several hundred years, the “hashishin” became known throughout the Middle East for killing two caliphs, many viziers, sultans and Crusader leaders.

Of course, not all Nizari Ismailis were assassins. Rather it was a portion of their followers known as thefida’i or fedayeen, meaning “those who sacrifice themselves”. The popular legend was that these well-trained young men would be pumped full of drugs like hashish, shown a promissory “paradise” garden full of virgins and sent off on a suicide mission that would allow them to return to this garden for good.

The fame of the assassins was such that it spread to Europe courtesy of Marco Polo, the celebrated Venetian world wanderer, who wrote about them in his Crusader accounts, embellishing their deeds and increasing their notoriety. In fact, stories of the “secret garden” and drugging are often attributed to Marco Polo’s writing prowess and as such debated for their historical accuracy.

Why take this approach?

Lacking numbers and an army, the leaders of the assassins realized that they needed well-trained fanatical warriors to further their political and religious goals. In particular, they initially battled against the Seljuk Empire, a Turko-Persian Sunni Muslim Empire which had a great chunk of territory under its control and actively battled the Ismailis, whom they regarded as heretical.

Hasan-i Sabbah and other assassin leaders saw that asymmetrical warfare worked in changing the leaders who opposed them and in seeding terror throughout the population. Their targets were often killed in broad daylight and in public spaces, to maximize the exposure of the act to the public. A possibly drugged assassin would suddenly appear in a marketplace and stab a well-known person through the heart with a poison-tipped dagger, an act sure to be worthy of fearful conversation. The assassins saw the elimination of leaders as a way of political discourse, a rather different tactic from the modern terrorists who see direct attacks on the population as the main operating principle.

Hasan-i Sabbah, the sect’s founder, was a remarkable man, versed in art, metaphysics, philosophy, math, astronomy and other sciences of the day. He conducted the sect’s operations from Alamut (meaning “Eagle’s Nest”), an impregnable Persian mountain fortress which is about 60 miles away from modern-day Tehran in Iran. The castle stood strong against many assaults, finally captured by the Mongols in 1256.

Many legends are told about Hasan-i Sabbah and it’s hard to separate fact from fiction. One version of his story tells of esoteric religious teachings that he would impart to his most advanced followers. He gets credit for saying: “Nothing is true. Everything is permitted.” – a statement that endeared him to generations of mystics. 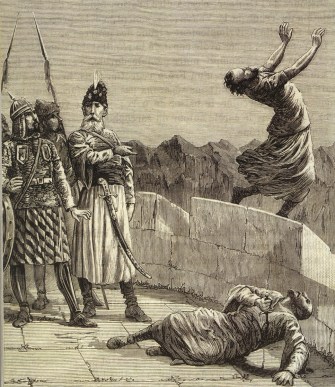 One legend tells the story of the Old Man of the Mountain demonstrating the loyalty of his followers to a visiting Crusader leader by ordering them to kill themselves.

Another infamous assassin leader was Rashid ad-Din Sinan, an Iraqi who led the group during the time of the famous Sultan Saladin, who ruled Egypt and Syria form 1174 to 1193. Saladin escaped assassins on several occasions. Less lucky was the Crusader King of Jerusalem Conrad of Montserrat, who was assassinated in 1191, perhaps in collusion with other Crusaders who contracted the Old Man of the Mountain to eliminate a common enemy.

In modern-day lore, the assassins are an inspiration for the popular video game and soon-to-be movie franchise “Assassin’s Creed”.

This Is How You Know You’re A Writer. But Also? An Introvert.

It takes a certain ability to shut off the outside world if you want to write more than a few sentences. John Irving sums it up in just over 1 minute.