You’re feeling sick — so sick you can barely walk — and so you visit a professional. You wait outside, feverish and exhausted, hoping they can help. Your name is called. You start to explain your symptoms but are interrupted before you can get going.

“Let me stop you there”, he says, “it’s obvious what’s happened. You’ve been cursed by the god Hermes. You must sacrifice two young goats and pray to him every day. I hope he takes pity on you. NEXT!”

This was the standard medical model of the ancient world. Priests and prayer cured diseases. That is, until Hippocrates reinvented the entire practice and defined medicine as a profession.

All we know of Hippocrates comes from a series of writings from the library at Alexandria, collected around 250 BCE. It’s a mishmash of collected wisdom, case notes, and philosophy, composed by multiple authors over many years. But Hippocrates is the master and name that binds it all.

Hippocrates argued that sickness and disease can be understood by rational enquiry and had natural explanations (as opposed to gods or the supernatural). Man was just as much part of nature as chickens or cows and could be treated or cured in much the same way.

Because the Greeks had strict rules against dissecting or cutting a dead body, Hippocrates and the early physicians knew very little about human physiology. Most anatomical learning had to come from the gruesome mess of the battlefield — people (literally) carrying their arms or returning with gaping puncture wounds in their stomach. The only other way was by drawing parallels with the animal world. For instance, the Hippocratics believed human pregnancy was similar to how a hen nurtured her eggs.

Man was just as much part of nature as chickens or cows and could be treated or cured in much the same way.

Without microscopes or medical experimentation, Greek physicians were much more limited and took a holistic view of the body. Today, medicine is pretty heavily disease centered, in that it focuses on pathology, such as dysfunctional organs or microbial infections. For Hippocrates, sickness was a whole body thing — caused only when the natural balance and equilibrium of the body was disturbed.

A sense of humor 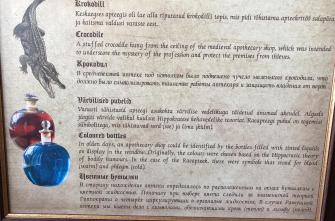 The humors blood (red) and phlegm (blue) are depicted in this document at Raeapteek pharmacy in Tallinn, Estonia.Credit: Alex Berezow

Hippocrates believed that the body was made up of various fluids, called humors, and different organs were responsible for their creation and regulation.

There were four humors: blood, phlegm, yellow bile, and black bile. These all existed in the body, and when present in moderation or in balance with the other humors, a person was considered healthy. (It should be noted that black bile was often seen as being uniformly negative). It was believed disease resulted when one or more of the humors was overproduced or located in an incorrect part of the body. So, if you have too much phlegm, you will get a cough. Too much blood, and you would vomit. Too much black bile, and you would become depressed.

While we might find this ridiculous, you can see why the Hippocratics thought this way. Even today, we’re often guilty of confusing symptoms with causes, and it’s completely logical for someone to think that since the body is expelling phlegm during a cold, that must be the cause of the disease. Or how a nosebleed is caused by excessive blood. Or how diarrhea looks like yellow bile.

Of course, this sometimes meant that Hippocratic medicine offered some absurd treatments. It was thought, for instance, that epilepsy was caused by phlegm blocking the airways — the convulsing was an effort to open them — so warm dry climates were recommended. A regular prescription was for a patient being told to drink Gladiator blood for its potency. If you had a headache, it was suggested that you hold an electric eel to your head to force out the unwanted humors.

Has your doctor ever sniffed your stool?

It’s hard to understate just how sick or infirm people would have been in ancient Greece. Thanks to modern medicine and public health, we’re very rarely sick, and when we are, medicine is usually effective and easy to get. Antiquity, though, was a world of fever, food poisoning, water-borne infection, animal bites, and frequent, brutal warfare (and the ensuing infections). Today, being healthy is the norm. Back then, it was being sick.

It’s not unfair to say that Hippocrates invented both prognosis and diagnosis. For the first time, a physician could say, “I know what’s gone wrong, and I can tell you how it’ll pan out.”

As such, having an empirically minded (if misguided) physician class like the Hippocratics would have had huge success for the patient and physician alike. By seeing disease as an imbalance of the entire body, the Hippocratics took keen interest in their patients. They were frequently bedside and their examinations incredibly thorough. For instance, they would often taste urine or ear wax to check if it was okay. They would eat leg hair and sniff patient’s stools. It’s not unfair to say that Hippocrates invented both prognosis and diagnosis. For the first time, a physician could say, “I know what’s gone wrong, and I can tell you how it’ll pan out.”

These physicians did not recommend drastic or intense interventions like surgery (not least because anything short of amputation would be fatal, anyway). They would prescribe lifestyle changes such as diet, exercise, hot baths, and sex (which was especially important for older patients). They would constantly ask how patients are doing. They would check that they were taking their medicine.

Though practically none of the Hippocratics’ medicine was anywhere near accurate, their bedside manner was quite different from the modern doctor’s: “What’s wrong with you? Right, here are your drugs. Good luck. So long.” Hippocratic medicine used every trick necessary to re-establish harmony to the whole body. The doctor-patient relationship was just that — a relationship, not a transaction. 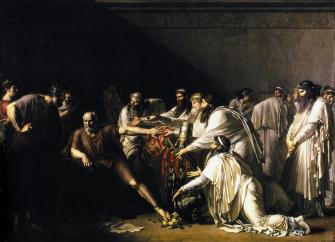 Hippocrates gave us two great gifts. First, he made medicine a scientific discipline in its own right. Second, he showed us how important it is to pay attention to the whole patient and respond to the totality of their sickness, including their mental state. Medical professionals worldwide still have to swear by the “Hippocratic Oath,” which, among many other things, obliges doctors to “remember that I do not treat a fever chart, a cancerous growth, but a sick human being, whose illness may affect the person’s family and economic stability.”

Voltaire once said, “The art of medicine consists in amusing the patient, while nature cures the disease.” This was no doubt true of Hippocrates. Surely, many of his patients recovered, but most often it was likely due less to his medical prowess and more to his patients enjoying a month-long spa with great food and lots of sleep.

We’ve been somewhat lucky in the past…
Health

While one may be helpful, the other may be harmful.
The Past

Reframing life in terms of death reveals some of the biggest philosophical problems with how we think about living systems.
Up Next
Starts With A Bang

Ask Ethan: Could Our Universe Have Collided With Another, Revealing The Multiverse?

An illustration of multiple, independent Universes, causally disconnected from one another in an ever-expanding cosmic ocean, is one depiction of the Multiverse idea. The idea that two of these bubble […]