Lasers can make amazingly precise measurements. Invaluable for precision construction and manufacturing, they also allow biomedical researchers and doctors to accurately detect the position and movement of microscopic objects, from cells to tissues to tiny biological structures. That is, when the laser can get a direct shot at the target, which is often not possible. In the human body, for example, these objects may be partially obscured by, situated in, or even behind complicated, obfuscating stuff.

Now scientists from Utrecht University (Netherlands) and TU Wien in Austria have devised a cool way to alter lasers so that they can bounce right through such distortion fields, arriving on the other side as an “optimal wave” intact enough to get to work.

Their new system is described in the journal Nature Physics. 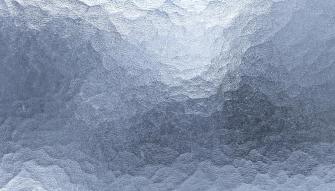 When working with lasers or any other measurement tool, “You always want to achieve the best possible measurement accuracy — that’s a central element of all natural sciences,” says paper co-author Stefan Rotter of TU Wien in a press release. A highly focused laser beam is an ideal tool for this. However, getting it through a disordered barrier without destroying the integrity of the beam is a challenge.

The researchers describe the problem using the example of the type of frosted glass one might encounter in a bathroom window. Explains Utrecht University’s Allan Mosk, another co-author, “Let’s imagine a panel of glass that is not perfectly transparent, but rough and unpolished like a bathroom window.” To keep people from seeing into the bathroom, “Light can pass through, but not in a straight line. The light waves are altered and scattered, so we can’t accurately see an object on the other side of the window with the naked eye.”

This is not very different from what happens when a scientist tries to examine some tiny object inside biological tissue. The disordered stuff between the scientist and the object turns the concentrated laser beam into a complex wave pattern that scatters on its way through the visual barrier. 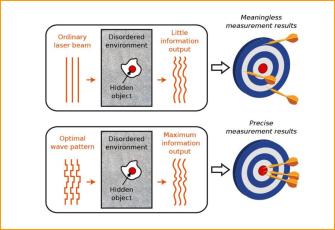 The researchers have found that they can modify a laser’s light in anticipation of the way it will travel through the disordered environment so that it hits its target on the other side with sufficient coherence for making accurate measurements.

While that optimal wave may not be a pure, pristine laser light, it’s nonetheless just the light wave needed to successfully make its way through that particular barrier. The researchers were able to develop a mathematical procedure that gives them the distortion required to produce such a wave. Says first author Dorian Bouchet, also of Utrecht University, “You can show that for various measurements there are certain waves that deliver a maximum of information as, e.g., on the spatial coordinates at which a certain object is located.”

Bouchet adds, “To achieve this, you don’t even need to know exactly what the disturbances are. It’s enough to first send a set of trial waves through the system to study how they are changed by [it].”

Returning to the glazed bathroom window example, the system would identify an optimal light wave that could travel through the disordered glass and still accurately measure movement of a person behind the glass.

The researchers confirmed that their formula worked in experiments at Utrecht in which they were able to make nano-scale measurements using a laser that successfully transited a turbid plate playing the role of a disordered medium. They also tried simpler and simpler laser beams—reducing the number of photons being used—to see how far they could push their system. They found that it even with the simplest laser possible, it still performed satisfactorily.

Says Mosk, “We see that the precision of our method is only limited by the so-called quantum noise. This noise results from the fact that light consists of photons—nothing can be done about that.” Still, he says, “within the limits of what quantum physics allows us to do for a coherent laser beam, we can actually calculate the optimal waves to measure different things. Not only the position, but also the movement or the direction of rotation of objects.”