In 2018 a woman tried to board a plane at Newark International Airport with her emotional support animal—a peacock. That didn’t fly; well, neither of them flew that day. Still, the term “emotional support animal” has been exploited by travelers attempting to transport a variety of animals in the not-so-friendly skies, including pigs, turkeys, squirrels, baby kangaroos, and miniature horses.

The skies became even less friendly to this trend when the federal government recently limited pets on flights to dogs, giving the struggling airline industry a bit of good news in an otherwise devastating year.

But what if the kangaroo was a robot?

Let’s not get ahead of ourselves. If we’re considering robot support “animals,” we’ll have to settle for dogs for the time being.

That’s the consensus from a group of researchers at the University of Portsmouth. In a new study, published in the International Journal of Social Robotics, first author Olivia Barber and colleagues argue that robotic dogs could soon replace real canines as emotional support animals—and will likely have an easier time and get fewer malicious stares when boarding planes.

The team brought two real dogs—a Jack Russell-Poodle mix and a Labrador retriever—alongside a biomimetic dog to visit a group of 34 children in West Sussex. The 11- and 12-year-olds had two sessions, one with the real-life canines, and a second with the robot, which was developed by Consequential Robotics. While the kids stroked animals equally, they actually interacted with the robot more. 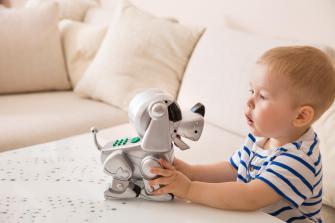 Study supervisor, Dr Leanne Proops, knows the emotional impact that real dogs have on children and adults alike. Yet many people suffer from allergies, while others are on high alert for diseases transmitted across species. There’s also liability concerns; lawsuits over biting dogs happen. And, of course, the expense of animals is prohibitive to some. Robots could fill a void.

“This preliminary study has found that biomimetic robots — robots that mimic animal behaviours — may be a suitable replacement in certain situations and there are some benefits to using them over a real dog.”

Despite the fascination, this story doesn’t end like the film “Her.” The pre-teens preferred the real animals, not the metal imposter. That said, the more time they spent with the robot, the fonder they became of him. The team chose dogs for this pilot study given their ubiquity and our longstanding positive relationship with them.

As part of the study, each participant filled out a questionnaire about their biophilic beliefs. Interestingly, animistic beliefs played a role—how willing they were to ascribe agency to the robot. The “realer” the robot felt, the more positive the affect.

Moving forward, robot support animals could help people unable to care for or be around actual animals. As Proops concludes,

“This is a small-scale study, but the results show that interactive robotic animals could be used as a good comparison to live dogs in research, and a useful alternative to traditional animal therapy.”

From boosting empathy to improving therapy, virtual reality is poised to change our ideas of the self.
The Future

On December 19 1972, astronauts Eugene Cernan, Harrison Schmitt and Ronald Evans splashed down safely in the Pacific Ocean, ending the Apollo 17 lunar mission. They were the last people to travel […]
The Future

Coupled with 3D printing, biomining the Moon or Mars with microbes could sustain human colonies without constant re-supply from Earth.
Neuropsych

Certain types of dogs seem to be more discerning than others, however.
Up Next
Starts With A Bang

Why 2020 Has Been A Traumatic Year For Scientists

The novel coronavirus COVID-19, as illustrated here against a backdrop of a DNA molecule, contains only approximately 30,000 base pairs in its entire genetic (RNA) sequence, yet is capable of […]