As nations like Singapore continue to build sophisticated underground infrastructure, there’s growing need for reliable and affordable lighting systems. To meet that demand, a team of researchers at Nanyang Technological University in Singapore created an innovative solution: a smart device that harvests real daylight and transmits it underground.

The device, described in a paper published by the journal Solar Energy, is something like a “smart” magnifying glass. Its main component is an acrylic sphere that sits above ground to absorb and concentrate sunlight. A plastic optical fibre is positioned under the sphere to collect and transport the concentrated sunlight to a desired location up to two stories underground.

To ensure the system collects the maximum amount of sunlight, a GPS device uses motors to move the fibre cable into optimal positions, depending on the position of the sun. This helps save energy, considering the only moving part is the lightweight cable, not the heavier sphere.

But what if it’s cloudy? To solve that inevitable problem, the team outfitted the emitting end of the fibre cable with an electrically powered LED bulb that produces artificial light. The researchers said future versions of the device may include a high-efficiency photovoltaic cell that would collect and store energy, meaning it could power the LED bulb during overcast conditions. That would make it a zero-energy device. 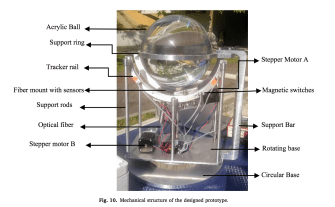 It’s poised to be an efficient system for underground lighting, especially considering the study results showed that the device’s luminous efficacy rating was more than double that of commercially available LED bulbs.

“The luminous efficacy of our low-cost device proves that it is well-suited for low-level lighting applications, like car parks, lifts, and underground walkways in dense cities,” Dr. Charu Goel, Principal Research Fellow at NTU’s The Photonics Institute, said in a press release.

“It is also easily scalable. Since the light capturing capacity of the ball lens is proportional to its size, we can customise the device to a desired output optical power by replacing it with a bigger or smaller ball.”

While some of the early prototypes look like complicated snowglobes, future devices would likely be designed to look and function like traditional lamp posts, illuminating streets above ground using electricity. This hybrid system could help light the way for Singapore’s plans to move more of its infrastructure underground.

As an island nation with a fast-growing population, Singapore has for years been exploring strategies to use subterranean space more efficiently. Singapore has already built underground highways, parking lots, and walkways, and by 2030 the government hopes to expand its subterranean infrastructure, including underground utility plants, roads, and railways.

“Where it is feasible and meaningful, going underground would be the approach to optimise land use and improve the quality of our living environment,” reads a report from Singapore’s Urban Redevelopment Authority. “In general, the shallow levels of the underground would be used for people-centric activities that require connectivity to above-ground; while the deeper levels would be used for utilities, infrastructure, storage and logistics uses.”

Could an advanced civilization change the laws of physics?

Do the laws of physics place a hard limit on how far technology can advance, or can we re-write those laws?
The Present

Augmented reality will give us superpowers

AR promises us a magical world.
The Future

Could we finally detect the elusive Unruh effect?
Up Next
Creativity

Why every leader should teach soft skills

Sometimes the value of soft skills feels almost secretive—like some scrap of knowledge handed down through an ancient society of corporate recruiters. Of course, that’s not the case or that’s […]