Do you like exploring underground? Then this contest is for you. The R&D arm of the US Defense Dept., The Defense Advanced Research Projects Agency (DARPA), is giving away cash prizes to those who can successfully map and navigate three different underground environments. The Subterranean Challenge (SubT) is open to teams worldwide.

Its purpose is to invigorate subsurface mapping and navigation. Overcrowded cities are beginning to spread out underground. Builders require new methods to develop such territory. First responders in turn, will need to navigate these environments quickly in a crisis. Consider the Chilean mining accident of 2010, when 33 miners were stuck underground for a total of 69 days. Such incidents could become more commonplace, if first responders don’t have the right tools and capabilities to address such a crisis.

As for security purposes, extremists like ISIS and rogue regimes like North Korea have used tunnels to evade the US military’s sensors, satellites, and other surface-bound, intelligence gathering methods. On another front, the results of the contest may help in the colonization efforts on the moon and Mars, places where a thin atmosphere offers little protection against harmful cosmic radiation. 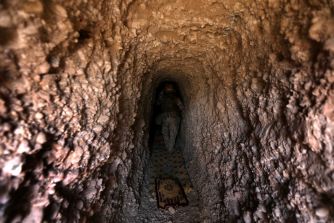 The battle against ISIS has been particularly difficult due to their use of tunnel systems. Credit: Getty Images.

The challenge will have three components, a human-made tunnel, an urban underground space, and a network of natural caves. The goal is to stimulate innovation and help bring forth advanced technologies or develop existing ones, allowing for rapid mapping, navigation, and search capabilities in situations where time is short and environments may be too hazardous for humans to traverse. “One of the main limitations facing warfighters and emergency responders in subterranean environments is a lack of situational awareness,” Chung said, “we often don’t know what lies beneath us.”

We’ve reached a crucial point where advances in robotics, autonomy, and even biological systems could permit us to explore and exploit underground environments that are too dangerous for humans. Instead of avoiding caves and tunnels, we can use surrogates to map and assess their suitability for use. Through the DARPA Subterranean Challenge, we are inviting the scientific and engineering communities—as well as the public—to use their creativity and resourcefulness to come up with new technologies and concepts to make the inaccessible accessible. 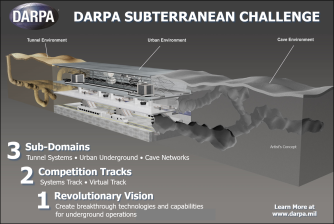 Teams who compete in both tracks will go through three preliminary events and a final one. The final event will take place in 2021. The first circuit will focus on human-made tunnels systems, the second an underground urban environment, such as a subway system, and the third, a cave network. It won’t just be a straight shot for teams. They can expect to confront a number of different challenges in each of these environments.

The Systems Track winner will be awarded a $2 million prize, while the Virtual Track winner takes home $750,000. DARPA plans to host the Challenge Proposers Day on Jan. 18 in Arlington, Virginia. If you or someone you know is interested in the contest, you can register or find out more here. If you can’t attend this event in person, you can go to a virtual one on Jan. 16. For more information on that, click here. You’d better hurry though, registration closes at 12:00 PM Eastern on January 10.

Related
13.8
The weirdness of quantum mechanics forces scientists to confront philosophy
Though quantum mechanics is an incredibly successful theory, nobody knows what it means. Scientists now must confront its philosophical implications.
Neuropsych
Why is a Starbucks loyalty rewards program making customers so angry?
The rewards price to get a free cup of hot coffee at Starbucks is going up.
Empowering growth
7 essential management training topics for every team leader
From emotional intelligence to problem solving, these management training topics will set team leaders up for success.
Thinking
What if you could rewire your brain to conquer suffering? Buddhism says you can
For Buddhists, the “Four Noble Truths” offer a path to lasting happiness.
Hard Science
Solved: 500-year-old mystery about bubbles that puzzled Leonardo da Vinci
The solution involves the infamous Navier-Stokes equations, which are so difficult, there is a $1-million prize for solving them.
Up Next
This Week in Comments: January 1st—January 7th, 2018
A new year. A new chance to make it big in the hyper-competitive field of commentary. Will you make the cut this week and get plucked from our 2 million Facebook followers?