The history of VR

One of the first VR technologies was created in the late 1950s and was called the Sensorama. It used 3D images on film, plus fans, odor emitters and a vibration chair to stimulate a viewer’s senses. When a person sat in the chair, placed their head inside the machine’s hood and looked at an internal screen, a 3D movie would start, complete with sound, air flow, odors and vibrations. The Sensorama never caught on because making the 3D films was too expensive at the time. In this early VR technology, we can understand what virtual reality is and some of its characteristics. 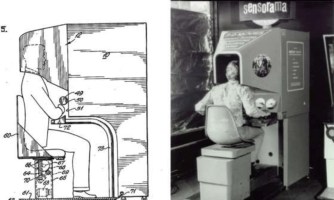 VR pioneer Morton Heilig built a prototype of The Sensorama in 1962, one of the earliest know multimodal technologies.

The history of AR

The term augmented reality was coined at Boeing in 1990 by researcher Tom Caudell. Boeing used manual processes for the display of schematics for factory floor workers, until Caudell and an associate conceived a system using glasses that workers could wear which would project complex wiring diagrams onto reusable boards instead of having to manually place the diagrams on plywood boards. In effect, Caudell and his colleague had created a precursor to Google Glass, albeit in a simpler form.

VR works very well for gaming because it enhances various computer games by providing richer, simulated environments and realistic characters and scenarios. According to one estimate, the global VR market might hit the $27 billion mark by 2022. Another prediction pegged the VR gaming market at over $40 billion by 2024. (The overall gaming market is actually much larger than the VR portion, at well over $100 billion per year.)

Flash forward from the 1990s, and these days Boeing does use smart glasses combined with software to better manage various forms of work during the assembly of its planes. For example, wiring production time was cut by about one-quarter using this method, which means planes can be constructed faster. Error rates have been reduced as well using the AR technology. Electrical system wiring and the installation of cabins are just two areas where the technology has been beneficial. 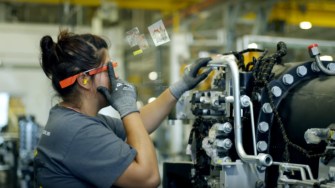 French aerospace company Airbus also employs smart glasses to reduce manufacturing time and errors. Lockheed Martin has been using this form of AR technology as well in the manufacturing of its F-35 fighter jets.

In fact, AR has been predicted to begin appearing in a number workplaces to increase productivity by improving how we interact with data.

Google Glass has been used by a solar power installation company to help workers in the field access important documents like design plans while working, instead of having to stop and use paper documents or laptop computers.

There are also other AR glasses being developed by other companies which are intended to be very lightweight and provide extra layers of information straight to human eyes in beneficial ways.

If VR shopping sounds sort of weird or ‘out there’ it actually has already become somewhat mainstream. Wal-Mart, one of America’s largest employers, has begun using it to train new employees, by simulating stressful scenarios. This allows trainees to prepare themselves when they experience real-world events like holiday rushes or cleaning up the mess in aisle 7.

The e-commerce giant Alibaba released VR shopping in China which allows millions of users to browse stores from home. 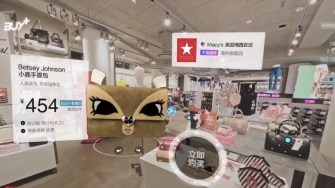 VR has been studied to see if it might help companies better understand how context influences consumer decision-making. For example, researchers provided adults with photographs of a beach and instructed them to imagine they were there and presented with beverage choices. Later they provided them with VR experiences of a beach and presented them with the same beverage choices. The VR experiences resulted in more consumer engagement and influenced their beverage choices more. So, VR might be used to create contextual shopping experiences which influence purchase decisions. (The ethics of this strategy are an issue that wasn’t examined by the study.)

VR has also been used for medical training, specifically for surgical simulations. By employing technology used for many years in flight simulations and applying it to neurology, 3D virtual brain surgeries can be performed. Medical students and doctors can practice hundreds of times or more using VR so they are well-prepared before operating on live humans. The images used in the system for training can be from former patients so they are as realistic and accurate as possible. Similar systems are also being evaluated for heart surgery and spinal surgery. 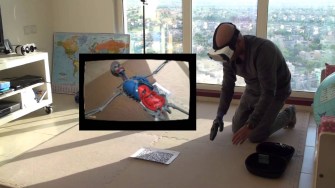 Because VR is a digital, immersive environment it can be used in very creative ways to try to solve human problems, like soothing autistic children and helping them learn to better manage the visual and auditory stimuli they experience so they can regulate their emotions.

VR can potentially also be used to reduce the suffering of burn patients because distracting the human brain is a powerful way to relieve pain. Early research has indicated that the distraction resulting from the use of VR might be more effective than morphine for pain relief. Considering that tens of millions of people around the world suffer from chronic pain the potential of VR to reduce suffering is very intriguing.

Researchers at Duke University tested VR physiotherapy on paraplegics. By simulating moving through a stadium using a soccer player avatar the research subjects activated parts of their brains and trained them. As a result, they regained some movement in their real limbs.

Because of VR’s ability to simulate environments, the technology has also demonstrated some promise for helping individuals with PTSD recover. One form of PTSD therapy involves exposing the patient to sensory information that was present during the initial trauma. These sensory experiences—including some scenes depicting conflict—can be re-created using VR so the patient can experience them in small ‘doses’ virtually and begin to acclimate to them.

Researchers and clinicians are exploring how AR might be used to improve surgical outcomes, reduce the invasiveness of procedures and decrease surgery times. Another potential application is the use of supplemental visual information right next to, or above a surgical site. This visual layer could display information such as the patient’s vital signs or data about the particular patient’s condition or anatomy. With essential information displayed right next to the site where the surgeon is working there would be no need to look away to computer monitors several feet or more away.

While operating room conditions are often the best for many procedures there are still some which are performed elsewhere, such as in a patient’s room. In these scenarios, the same high level of support is unavailable, but using AR could improve the surgical process by consolidating

information from various patient monitors into one view. Furthermore, some patient monitoring and data display systems are completely separate from one another. Integrating them could free up much-needed physical space in patient rooms, streamlining the environment to be less consumed by electrical cords and blinking monitors and more conducive to rest and healing.

VR has been used for educational purposes like Google Expedition which allows users to have immersive 3D experiences of historical or cultural significance. Over one million students have taken these virtual field trips.

A Stanford University Business Innovation certificate program is partially delivered using VR, and VR chat has been used at the University of British Columbia to deliver lectures. Some colleges and universities have used VR to create online campus tours. The implications for enhancing remote or long-distance learning are enormous.

At a more granular level, there has been a surge in the number of educational apps and some of them have proven to be very popular with students in classrooms and free-range curious folks. Star Chart is a VR app for your phone that, when combined with hardware—like the inexpensive $15 Google Cardboard viewer—lets you wander our solar system in detail, see real-time views, and get up close to 88 constellations. Google’s Tilt Brush is another incredible app that lets you paint in 3D space using VR. Ever wondered what it’s like to step inside an artwork? Watch this Tilt Brush demo video to give you an idea of how this app can blow your creativity up.

AR apps have already been used in educational settings for a variety of enhancements, like turning physical textbooks into pop-up books by adding 3D graphics to them, or allowing students to receive information when they point a tablet at particular objects.

Flash cards are a very old learning aid, but AR apps have been created that add 3D digital images to them. A flash card depicts, say, a 2D animal and the AR app inserts 3D digital images that correspond to it. The 3D digital images can move and they are linked to audio files which play the animal’s vocalizations. The AR sensory overlays add extra visual and sound information for learners which helps them identify and recall the animal content. The AR content also includes the digital representation of the foods in the animal diets which enhances the learning experience.

Within the AR world, there are scores of apps and software programs. The AR game Pokémon Go is probably the one we have all heard of, but there are many, many more and new ones are being created continually. Google Sky Map is an Android AR app that turns your phone into a planetarium. Just point it up and Sky Map will reveal the location of stars, planets, beautiful nebulae and other celestial bodies. For iOS users, Monster Park brings the world of dinosaurs to life, crashing around very close to you. You can also dissect frogs on Froggipedia, which saves frogs lives and is a gift to squeamish high school students everywhere.

The variety of AR apps on offer is already enormous, so start Googling for your interests or head to YouTube for visual demonstrations that can give you a taste of what augmented reality could look like for you.

What’s in store for the future?

A market research report published in 2017 predicted that the size of the AR market could reach $133 billion by 2021, which trumps VR’s market size.

VR and AR both have benefits and each is suitable for different purposes. One thing they have in common is anticipated growth—it is expected that they will continue to develop extensively and increasingly be adopted to solve various problems in business, healthcare, education and workplaces. And also let us have a whole lot of fun.

Related
Starts With A Bang
The path forward for astronomers and native Hawaiians
A history of injustice and the greatest natural location for ground-based telescopes have long been at odds. Here’s how the healing begins.
Thinking
“Give a f***, actually”: The surprising benefits of being grateful for things you dislike
Radical Emotional Acceptance calls on you to celebrate all of life’s emotions — even the negative ones.
Thinking
Visual thinking: How to understand the inner lives of animals
Humans are good visual thinkers, too, but we tend to privilege verbal thinking.
Strange Maps
The world’s longest straight line connects Portugal to China
It’s nearly 20,000 miles long.
The Well
This is what the fourth dimension looks like
Left–Right, Back–Forth, Up–Down. What’s the fourth dimension?
▸
3 min
—
with
Brian Greene
Up Next
Critical Thinking
What Does It Mean to Have a Growth Mindset?
As humans, our minds constantly monitor the events that occur in our lives and interpret the meaning of the things that are happening. Our mindset is what dictates how we […]