Tech has gone through some ups and downs over the years, and has played a big role in some of our past economic slumps. However, the tech sector added 3,600 new jobs to the U.S. economy in April, proving that it is clearly a dominant player. The prominence of the industry has prompted several bouts of research and questions about its role moving forward.

A new report, called Innovation That Matters, by the venture capitalist firm 1776, Free Enterprise, and the U.S. Chamber of Commerce Foundation, ranks U.S. cities according to their assessed readiness to capitalize on the digital economy that is becoming more and more a product of daily life.

The report is an update to a previous version, and it draws upon statistics of existing talent, quantity of investor dollars, density of startups, connectivity, and culture (as assessed by a survey), to build its rankings. 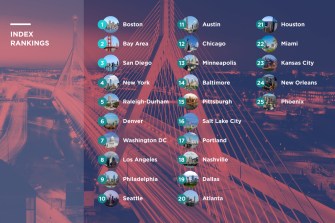 Some of the cities that rank high on the list are expected (Boston and the Bay Area), while others come as a bit of a surprise. Denver for instance, ranks high because of its flourishing job market, involved investors, and general livability. Another underdog, the Raleigh-Durham area, is a center for health startups amidst its dense network of medical centers and pharmaceutical companies.

The findings of the report are important, but at the same time, it’s easy to over-romanticize tech as the sole contributor to the modern economy, or as a categorically positive influence. Many complaints have been lobbied against tech companies as sources of gentrification and growing class inequality. In fact, San Francisco fell from first place to second in the Innovation That Matters rankings this year partially because the area has become so expensive alongside the growth of its tech industry. Across the U.S. the middle class is shrinking, and many of those in the highest income brackets belong to the tech sector.

At a macro scale, some economists worry that the tech sector and other hot markets of the current age aren’t actually contributing much to economic productivity. So there are clearly some residual questions about how digital economies fit into U.S. growth. However, the rankings provide an interesting snapshot of some of the factors that contribute to growing job markets, and it will be interesting to see which cities remain dominant players moving forward.

Related
13.8
What kind of intelligence is artificial intelligence?
The initial goal of AI was to create machines that think like humans. But that is not what happened at all.
The Present
What’s effective altruism? A philosopher explains
Some effective altruists “earn to give” — they make as much money as they can and then donate most of it to charities.
Sponsored
How to avoid family fights about money
No family is immune to money conflicts, no matter how much they love each other. Here’s what to look out for.
L&D strategy
Best practices for a needs analysis [Templates included]
Conducting a thorough needs analysis requires care, curiosity, and open-mindedness.
Neuropsych
Memory and the benefits of forgetting
Forgetfulness isn’t always a “glitch” in our memories; it can be a tool to help us make sense of the present and plan for the future.
Up Next
Smart Skills
World’s Most Popular Painkiller Also Kills Empathy
A new study finds that one of the world’s most popular painkillers affects the ability to empathize with the suffering of others.