It’s no small secret that we are addicted to our phones. By my own phone’s measurements (thanks to the iOS 12 beta testing program) I use my phone between 2 to 4 hours daily. Which is double what I had estimated. iOS12 also tells me I pick up my phone about 110 times a day. These are mostly dozens of small checks of five to 10 minutes each, barely 15 minutes apart on average.

That’s a shocking amount of time spent on a device that was supposed to make my life simpler. Instead, it’s kind of taken over. Through a friend*, I came across Normal Object’s ‘Dumb Watch‘ ($275—and yes, that’s the actual name), which is essentially just a gold bracelet that looks like a watch. The idea behind it is that it should, in theory, help you check your phone less. My interest piqued, I asked to try it. They sent me a sample, and I wore it for 3 days to test it out.

First, it’s handsome: it really does look for all the world like a souped-up gold Casio digital watch, albeit with a bit more bling. But anyone that was close to it—friends, wife, baristas, guy sitting next to me at the barbershop—wanted to know more about it. It’s a pretty good conversation starter, too: everyone who asked about it told me they had difficulty with smartphone-related attention spans deficits.

So, the big question: does it really work? Here’s what I found. Yes, you do find yourself checking your phone less. In those moments where I’d usually pull out my phone to check the time (and then get sucked into a phone void), I found that I just looked at the dumb watch for half a second, reminded myself I didn’t really need to get my phone out, and then moved on with my life. I was genuinely engaged more with my surroundings.

Whereas I usually averaged 110 pickups a day, with the dumb watch I averaged between 75 and 90; so roughly 1/3rd less than usual. For what it’s worth, this wasn’t a scientific study—nor do I claim it to be—I simply just found this to be an effective method of checking my phone less on the days that I wore it.

So I decided to go one step further and interview the guy who designed it, Jeremiah Baker of Los Angeles design firm Normal Objects. Turns out that he has a background in industrial design, having designed all kinds of everyday appliances for the likes of Samsung and many more. This interview was edited for length and clarity.

BIG THINK: You have a background in industrial design. How did you get started in that?

JEREMIAH BAKER: I went to design school for undergrad. But before that there was a high-school level program that gave a talk at my school. Not a lot of kids get that kind of exposure to, well, that job in general. There’s not a lot of thought that goes into the objects around you. A lot of the design of these objects… industrial design… isn’t particularly artful. There’s a lot of problem-solving that goes into an industrial design. I guess the best works combine the two.

What kind of problem does the ‘dumb watch’ solve?

JEREMIAH BAKER: It’s about less. Less is more. I recently, when I lived in San Francisco, I worked on a bunch of smartwatch designs [for Samsung – Ed.] when smartwatches were on the rise, around 2013-2014. I did a ton of smartwatch projects. I didn’t like the idea that you were dependent on your device. I want people to pay attention to the moment, and not pay attention to the time. To live in the moment. I think with all these devices we’ve developed constant time anxiety.

What were some of the frustrations with working on smartwatches?

JEREMIAH BAKER: Some of the challenges there… they were pioneering from a production point. There’s only a small area on your watch and you can’t try to cram so much information in there… trying to funnel all that information into a tiny screen didn’t feel natural. And the ‘dumb watch’ is supposed to contrast that. In theory — don’t pay attention to your watch, to your devices. It’s to remind you to slow down and appreciate what’s around you.

There’s a reason that wearable tech market slowed down considerably after 2016 or so… people tried to cram too much in there, into that small real estate. Health monitoring, that’s beneficial. But I’m struggling to think who would want to buy a movie ticket through their watch. 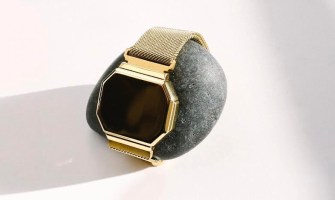 Why make the ‘dumb watch’ beautiful? What were some of the design inspirations?

JEREMIAH BAKER: The silhouette is from an ’80s Casio watch. It’s an iconic footprint, and taking the watch out of it changes the role. And like I said, it’s supposed to make you think about the moment, about the present, when you look at it. Why not make it beautiful? It’s like what we do with the other items at Normal Objects, whether it’s a jacket or a hat, or the ‘dumb watch’. These items are meant to have a story, but I feel that over time we’ve commoditized them. [Normal Objects] is trying to bring that back, to make them premium, to make them elevated. And it cuts out time anxiety.

Allow me to play devil’s advocate for a second. What makes this different than a gold bracelet?

JEREMIAH BAKER: Most timepieces on people’s wrists used to tell a story… smartwatches don’t really do that anymore. We already live in a society with enough screens and there’s no use making another complicated, ornate thing that’s arbitrary and doesn’t ultimately tell a story.

Right. You’re not going to hand your Apple Watch down to your kids.

*Full disclosure: I used to work for a fancy men’s magazine a few years ago, I became friends with someone at a PR company that used to pitch me products. We chat almost exclusively about LA sports teams and New York media. I didn’t receive payment nor gifts from Normal Objects—or any other party, for that matter—to feature the ‘dumb watch’; I just really dug the idea behind it.

Engaging in a brief mindfulness exercise made people who identified “I/me” words 33% less likely to volunteer.
Up Next
Surprising Science

Scientists have discovered a rare hybrid between a melon-headed whale and a rough-toothed dolphin in waters near Kauai, Hawaii.