A photo of a little boy on a bicycle approaching a row of riot police in Moscow ricocheted around the Internet on Monday after the photographer posted it to Twitter.

Julia Ioffe, the Moscow correspondent for The New Yorker and Foreign Policy magazine, snapped the picture with her iPhone and gave it a caption that reads: “Russia’s Tianamen (sic) image.”

Protestors were marching against Vladimir Putin the day before his inauguration. Rows of police in full riot gear were on deck to keep them within the boundaries of their rally permit. When things got out of control, rocks and bottles were thrown and the police responded with force, according to ABC News.

The little boy weaved through the crowd in his tiny bicycle and stopped in front of the police when Ioffe took the picture. 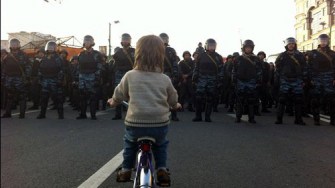 Tiananmen Square’s famous Tank Man photo is now over twenty years old and as far as some are concerned, it is the most “extraordinary picture of the last half of the 20th century,” said Timothy Brook, a professor of Chinese history at University of British Columbia.

“You could look at him as unusually brave, but he probably wasn’t,” said Brook. “He was probably just an ordinary person who was so disgusted at what he had seen for the last few days.”

The boy on the bike might be too young to have a political agenda. He may not even know who Putin is. But iconic images like these become so much more than just a picture. The Tank Man photo “instantly became a symbol of the protests as well as a symbol against oppression worldwide — an anonymous act of defiance seared into our collective consciousnesses,” writes The New York Times.

Living PlanIT is a company that aims to build the new, sustainable cities of the future.They are teaming up with different partners to help them develop and implement new infrastructure […]