The 40-hour workweek goes back to the Fair Labor Standards Act of 1938, aimed at factory workers who, at the time, were working an average of 53 hours each week. Futurists look forward to a time when robots will take over the 4D jobs—for “dull, dirty, dangerous, and dear“—and we’ll have more leisure time for other important parts of our lives. New Zealand recently experimented with a four-day, 32-hour work week and found that it led to more productivity rather than less. This will come as no surprise to those of us on the 40-hour treadmill. Truth is, for 49% of us, that 40 hours is just the baseline—we work more than that.

Mattress company The Sleep Judge recently conducted an online poll of 1,018 U.S. full-timers to learn more about their job realities, and has put together America’s Ideal Workweek, infographics than visualize what our work days are really like.

All infographics in this article are by The Sleep Judge. 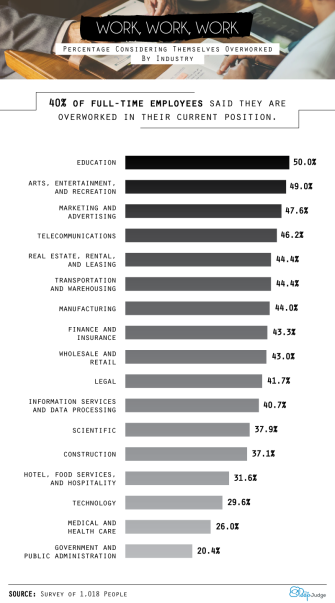 For most careers, it’s working hard, especially educators, 50% of whom report being overworked. This under-appreciated segment of our culture on average puts in long hours. The category includes teachers at all levels, though our hearts especially go out to public-school elementary teachers who—to get the desired results—regularly invest extra time and their own money for supplies and guidance for their young charges.

At the other end of the scale? Government and public administration workers. 79.6% are just fine with their workload, which you can ponder next time you’re stuck in line at the DMV. 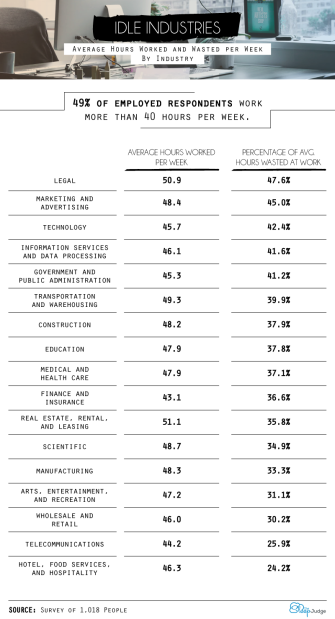 Here’s an interesting contrast. The Sleep Judge also asked people how much time is wasted during a typical workday. We asked them to get more granular as to whether this was time wasted by each worker, or time that others waste—unfortunately the survey doesn’t differentiate.

At the top of the list was people in the legal industry, who reckon almost half of their time each 50-hour week goes to waste. Is this because they bill by the hour and are impatient with non-billable tasks? Certainly surfing the web for them is just throwing income away, so we suspect this is a complaint against others. As for other industries, we can only surmise based on our image of the people involved. The 42.4% wasted by technology workers, for example—yeah, maybe it’s Facebook and Instagram. People who work in hospitality, though, are kept jumping, and they report the least wasted time. 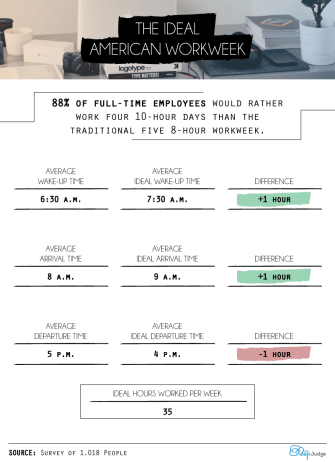 88% of The Sleep Judge’s respondents said they’d rather work 10-hour days but only four of them a week, providing them more refreshing breaks between. That notwithstanding, they’d rather just put in 35 hours a week.

The survey inquired of people when they’d prefer to wake up, get to work, and get out of work each day. They’re just about an hour off, too early in the AM, too late in the PM. 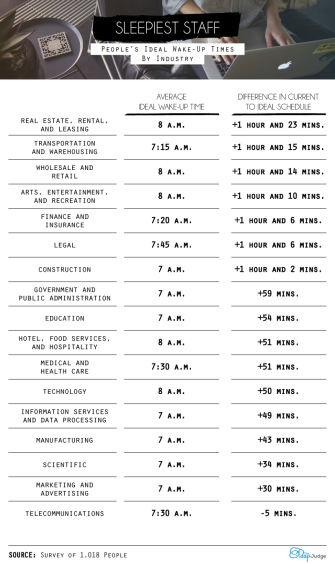 So, here’s an amusing one: You’re not the only sleepyhead here. People in all of the polled industries except one reported wake-up times that were just too early. People in real estate, rentals, and leasing were the groggiest, arising an hour and 23 minutes earlier than they’d like. People in telecommunications were the single exception: They thought they should be waking up 5 minutes earlier than they do. (Dude, your alarm is adjustable.)

What would you give up to change your hours?

While the survey found that 41.2% of people would rather have more time than more money, only 30.3% were actually willing to give up money they’re currently making in exchange for a better sched.

The people most willing to take a salary cut are those in government and public administration, which rings a bell… oh, yeah: They’re the ones who also report being the least overworked. In-teresting. Of the rest of respondents who would accept a pay cut, real estate/rental/leasing, technology and scientific come out at being willing to give up at least $5k. Overworked teachers are next.

Making it work for you

As we noted, New Zealand’s been looking at shorter weeks, and most industrialized nations offer more generous paid leave time—another way to address workers’ time needs. At the same time, people in lots of other countries work longer days, and our 40+ weeks are pretty average internationally. It’s also worth noting that some people so enjoy their work that they’re basically at it whenever they’re awake—certainly our connected devices encourage us to stay on top of things 24/7/365.

On a personal level, the best strategy, of course, is to do meaningful work that makes all that time feel worthwhile even beyond meeting financial needs. This isn’t always possible, but it’s always a sensible objective in moving from job to job. Enjoying the people you work with also makes all that time put in not so bad at all.

Experts say we should only be working 15 hours per week, so why are some working 80?
▸
6 min
—
with
James Suzman
Neuropsych

A study of 1.6 million people ties high incomes with more positive emotions and fewer negative ones, but only towards the self.
The Future

A new MIT report proposes how humans should prepare for the age of automation and artificial intelligence.
The Present

Can the U.S. fix unemployment with ‘Universal Basic Jobs’?

What would happen if the U.S. guaranteed every citizen a job with a living wage and benefits?
The Present

How our micro-internships can help fill the COVID employment gap

With 45% of recent college graduates under or unemployed, it’s time to explore new solutions.
Up Next
The Future

Many of our greatest fears stem from uncertainty about the future, and technology has made the future very uncertain indeed.