New research in life sciences promises to not only paint the fullest picture ever of how the human brain works, but also offers a potential way to influence it with great accuracy.

If only we could see exactly how the neurons in our brain affect behavior, we could cure psychological illnesses and disorders like Alzheimer’s or Parkinson’s.Such is the ultimate vision of the study’s co-author Ed Boyden, an associate professor of brain and cognitive sciences and biological engineering at MIT, who is also a member of MIT’s Media Lab and a Big Think expert.

Among other notable recognitions, Boyden won the 2016 Breakthrough Prize in Life Sciences for the development of optogenetics, the field he pioneered with Karl Deisseroth.

In a recent interview with Medscape, Boyden said that optogenetics grew out of the insight that the brain could be controlled with light.

“All over the tree of life are molecules that are essentially photosynthetic,” told Boyden to Medscape. “They convert light into electrical signaling. Brain cells compute with electrical signals. If we can put those molecules in and shine light on them, we can turn on neurons in the brain, in a very precise, digital way.”

Boyden is the senior author of the new study, along with Valentina Emiliani, research director at France’s National Center for Scientific Research (CNRS) and director of the Neurophotonics Laboratory at Paris Descartes University.

The advance they made is to figure out a way to target single cells, allowing for precise control of both the timing and location of their stimulation. The achievement will allow for new studies of how individual cells and neural circuits can generate specific behaviors like starting a movement or learning a new skill.

“Ideally what you would like to do is play the brain like a piano,” said Boyden. “You would want to control neurons independently, rather than having them all march in lockstep the way traditional optogenetics works, but which normally the brain doesn’t do.” 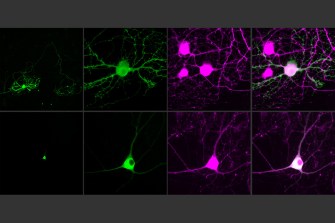 Credit: Ed Boyden. The new opsin that can be targeted to neuron cell bodies is in the bottom row. Neurons in the top row have traditional opsins that you can see being distributed throughout their axons.

The previous optogenetic technique targeted many cells at once. But to Boyden, this wasn’t precise enough as neurons may have different functions even if they are near each other.

Using the new technique, the scientists managed to stimulate single neurons in brains slices and measured responses from neighboring cells. This can make possible diagramming the brain’s connections and showing how they change in real time as the brain performs functions or learns.

You can read the new study here, published in Nature Neuroscience.

Related
L&D strategy
Best practices for a needs analysis [Templates included]
Conducting a thorough needs analysis requires care, curiosity, and open-mindedness.
Neuropsych
Memory and the benefits of forgetting
Forgetfulness isn’t always a “glitch” in our memories; it can be a tool to help us make sense of the present and plan for the future.
The Learning Curve
5 Stoic quotes to help you through difficult times
“We suffer more often in the imagination than in reality.”
Starts With A Bang
The good reasons scientists are so hostile to new ideas
Many people out there, including scientists, claim to have discovered a series of game-changing revolutions. Here’s why we don’t buy it.
The Present
Climate change is altering the chemistry of wine
Smoke taint from wildfires is gross, even to wine amateurs.
Up Next
Hard Science
Why Religion Is Not Going Away and Science Will Not Destroy It
The US is arguably the most scientifically and technologically advanced society in the world, and yet at the same time the most religious of Western societies.