Consider this. It’s time to do that creative thing you do, be it music, art, writing, whatever. You strap on a cap and it stimulates your brain in such a way, as to ramp up your creative juices. According to researchers at Queen Mary and Goldsmith’s Universities, both of London, such a device could, someday, become a reality.

They caution too that there are already a lot of hucksters out there, who are leveraging public interest and ignorance, in order to make a buck. We’re not there yet. But we are making headway. The results of this study were published in the journal Scientific Reports.

Really creative types are known to be mavericks. They don’t like to follow rules or society’s conventions. This plays out on the neurological level as well. A part of the brain called the dorsolateral prefrontal cortex (DLPFC) is the stickler of the human mind. This part of the frontal brain is responsible for most of our thinking and reasoning. It’s the rule maker of the brain, and the reminder of the rules. 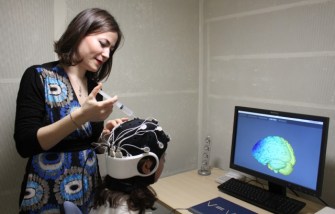 Dr. Caroline Di Bernardi Luft was the study’s first author. She hails from Queen Mary’s School of Biological and Chemical Sciences. Dr. Luft said, “We solve problems by applying rules we learn from experience, and the DLPFC plays a key role in automating this process.”

She added, “It works fine most of the time, but fails spectacularly when we encounter new problems which require a new style of thinking – our past experience can indeed block our creativity. To break this mental fixation, we need to loosen up our learned rules.”

Dr. Luft teamed up with Dr. Michael Banissy and Prof. Joydeep Bhattacharya, whom she previously worked with at Goldsmith’s University. The researchers set out to find if they could suppress the DLPFC, using a technique called transcranial direct current stimulation (tDCS).

This is a constant flow of weak, electrical current delivered through electrodes soaked with a saline solution, positioned at key points on the scalp. The constant electrical flow can suppress or activate the DLPFC, as desired. Though it sounds painful, scientists assure us the participants didn’t feel a thing.

Just six volunteers took part in the study. Each recruit was asked to solve “matchstick problems,” which forced them to think creatively. Participants worked on these math problems before and during stimulation. They were made to grasp arcane arithmetic or algebraic rules in order to understand how to solve the problems. 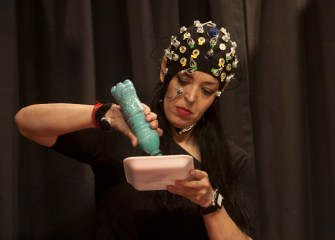 Imagine stimulating your mind with electricity to boost your creativity. Getty Images.

Each participant received one of three types of tDCS: DLPFC suppression, DLPFC activation, or no intervention at all. Those who had a suppressed DLPFC were more likely to solve the problems creatively and more apt to solve difficult ones, than those in the other groups.

Their edge was quickly lost however, when tasks demanded more working memory. Certain problems forced subjects to keep track of all their previous moves in the course of working the problem. Here, a suppressed DLPFC actually worked against the subject.

According to Dr. Luft,

These results are important because they show the potential of improving mental functions relevant for creativity by non-invasive brain stimulation methods. However, our results also suggest that potential applications of this technique will have to consider the target cognitive effects in more detail, rather than just assuming tDCS can improve cognition, as claimed by some companies which are starting to sell tDCS machines for home users. I would say that we are not yet in a position to wear an electrical hat and start stimulating our brain hoping for a blanket cognitive gain.

But this is a giant step forward, offering an avenue for brain enhancement that isn’t invasive and doesn’t cause side effects, as pharmacological options might. This isn’t the only study of its kind. In 2015, researchers at the UNC School of Medicine also induced creativity using tDCS, but they applied it differently.

There, researchers used electrical signals to boost alpha waves inside the brain. This induces the kind of relaxed mental state one experiences while daydreaming. The technique was shown to increase a participant’s creativity by over 7%, on average. The results were published in the journal Cortex.

To learn more about tDCS for improving cognition, click here:

Before we discovered gravitational waves, multi-messenger astronomy got its start with light and particles arriving from the same event.
Up Next
Starts With A Bang

There are many cases in the Universe, such as imploding stars or neutron star collisions, that are strongly suspected of creating high-energy bursts of electromagnetic energy. Black hole mergers aren’t […]