When was the last time someone told you how much they love their alarm clock? Didn’t think so. Whether your alarm sound cuts into your rest like a knife or sneaks up on you slowly, how do you respond? Do you leap out of bed excited for the day, rouse yourself slowly to face the daily inevitable, or just hit the snooze button and pull the covers over your head? And then, once you’re ambulatory, do you blaze off toward your day or gingerly step into its activities? The folks at Best Mattress Brand surveyed over a thousand people using Amazon’s Mechanical Turk and found that the way we hop out of bed—or don’t—and get ready raises some interesting corollaries regarding the rest of our lives.

The average time, by the way, it took to get out of bed for Best Mattress Brands’ respondents was 11.6 minutes, give or take 13.8 minutes. Likewise, it took an average of 43 minutes to get out the door, with a standard deviation of 26.3 minutes.

All of the infographics in this article are by Best Mattress Brand.

Getting out of bed

We can state that in general—and across a broad number of areas—the faster you get a move on, the more positive your outlook likely is. But there are also bedroom issues that help us wake quickly or not.

Let’s start simple. The survey revealed that the environment in which your alarm goes off is one of the things that can affect the promptness of your response. The temperature of your room and the amount of light are the largest factors, as we can see. 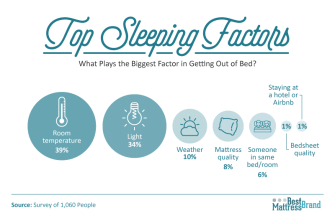 Whether or not you’re in bed alone also affects things—more on this later.

Just how satisfied are you in life?

Feelings about how successful you are seem to affect your get-outta-bed speed—we’re not talking income here, since, as we’ll see, that doesn’t really seem to have much to do with this. It’s about how you feel about your health, family relationships, and your social life in general. 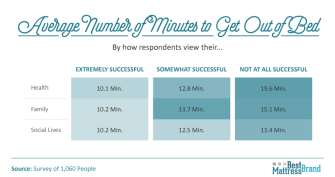 The less satisfied you feel, the longer you linger supine.

So it’s not surprising that the people who are unemployed aren’t especially compelled to get out of bed quickly, but they’re not the slowest group: It’s people in the arts, entertainment, and recreation! Kind of weird, but maybe it’s their dedication to pleasurable activities—like sleeping—or maybe it’s the late hours many of them keep. People in blue-collar careers get right down to business. 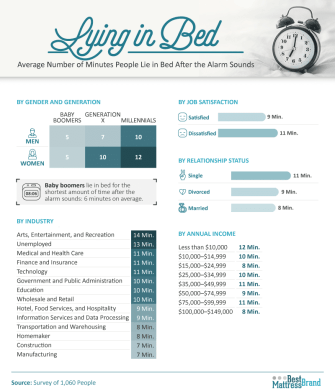 They say older people sleep less, and in fact, baby boomers are the most sprightly when it comes to getting out of bed. The slowest, interestingly, are female millennials.

Getting out of the house

The first decision of the day, of course, is made the night before: How much time to allot to getting up and ready to be off. No doubt some of these decisions are made aspirationally—that is, how long you think it should take to get dressed and such—and some are made based on sorry experience, which is to say being late in the past has led to a more capacious margin of error. 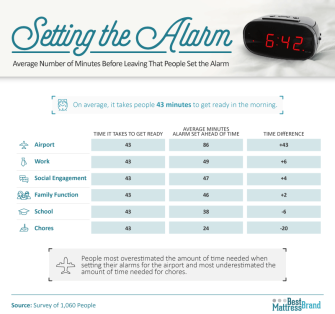 Of course, it also depends on what you need to get up for, as the data shows. Hilariously, those waking up to perform chores set the alarm only 24 minutes before they need to get started, knowing full well it takes them 43 minutes to get ready. Otherwise, realism and the desire to sleep are kept pretty much in balance, with the exception of those catching a flight—they wisely pack in extra time just to be sure they make it.

How the day begins

Okay, so you’re finally out of bed. What’s the first thing you do? For a majority, 55%, it’s a trip to the bathroom. No shocker there. But 11% of respondents check their phones first, with women spending six minutes at it and men four. Why? To check on their families or the news? Nah. It’s about social networking. Facebook is the most frequently visited platform at 21%, followed—surprisingly—by Reddit, squeaking into second place ahead of Instagram. This balance changes with fashion of course, and probably with age group. 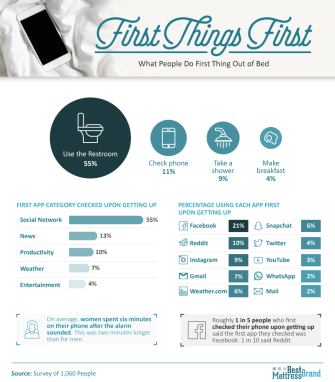 How long getting ready really takes

One’s career doesn’t seem to have a lot to do with how long it takes to get ready. Some blue-collar jobs require less prep time, but not all. Construction workers, for example, take more time: “Hardhat, check. Safety footwear, check.”

We might note, too, that those who have others’ eyes on them all day—government and public workers, teachers, and homemakers—allocate more time to making themselves presentable.

Age-wise, the speediest morning preppers are male millennials, who claim to only take 31 minutes to be out the door. Gen Xers are the slowest group overall.

Cutting yourself some slack

In addition to deciding on the time for the alarm to go off, people are apt to do things the night before to help their future selves the next day. Women are more on the case here, selecting the next day’s clothes, taking a shower the night before, and getting the day’s meals ready. In fact, for every one of the survey’s 11 preparatory activities, men trail women. Hm. 31 minutes, millennial guys? 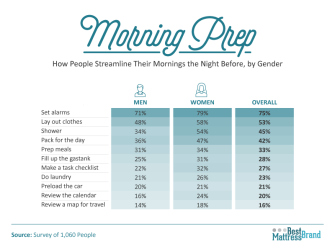 No cause for alarm

It’s an odd, thus-far unexplained, phenomenon that those whose schedule seldom changes find themselves waking up a minute or so before their alarm goes off. Whether one feels cheated of those last few moments of sleep or pleased with the ability to keep track of time while unconscious is probably a matter of disposition. It’s also amusing—really, a little perverse—that nothing makes it easier to fall asleep than knowing it’s time to get up.

Related
Hard Science
Some earthquakes last for seconds, others for minutes — and a few for decades
What do you call it when the Earth shakes for three decades?
Sponsored
What childhood “money story” is shaping your financial behaviors?
Here are the signs that you inherited “money anxiety” from your parents.
The Present
The “maritime Indiana Jones” who salvages shipwrecks now wants to tow icebergs
Simple physics makes hauling vast ice chunks thousands of miles fiendishly difficult — but not impossible.
Neuropsych
Inside the brains of aging dogs
In a citizen science project, thousands of pet dogs are helping scientists to understand what happens to memory and cognition in old age.
Neuropsych
The most common source of awe might surprise you
It’s us.
Up Next
Leadership
How to Not Be a Toxic Leader: 5 Things to Avoid
A toxic workplace is detrimental to employees and their productivity. It also repels the best and brightest talent from wanting to step through your doors. So, it’s important to discover […]