Early humans did not all come from the same place and they varied much more physically than the humans of today. An upcoming paper says that it’s time to “radically rethink” how our species emerged. There was a period of time when a number of very different Homo sapiens population lived alongside each other, exhibiting both archaic and modern features.

The scientists make this claim in particular relation to the region they studied, an area from Morocco to South Africa in the period of about 300,000 and 12,000 years ago. One pillar of their reasoning steps from the discovery of early Homo sapiens fossils in Morocco last year. Those were dated to 315,000 years ago, and had a combination of characteristics.

Phillip Ganz of the Max Planck Institute for Evolutionary Anthropology in Leipzig, Germany analyzed the fossils and explained:

“These early individuals had modern faces and modern teeth, but elongated braincases. This suggests that features of brain shape, and perhaps even brain function, emerged within our species.” 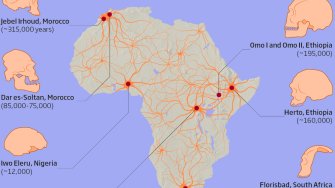 How is it that people that looked different could belong to the same species? Oxford University’s archaeologist Dr. Eleanor Scerri, writing in the New Scientist, likens us to a “river”:

“Although there is only one river/species, as time passes, different channels branch off and rejoin it,” elaborates Scerri. “Just as the river’s braids are separated by islands that form and are submerged, so environmental barriers kept our ancestors apart, and adapting to different conditions.”

The conditions that were changing on our ancestors were brought about by climate changes in different regions of Africa that were happening at the same time as the early human development. The Sahara desert, for one, was actually green for a short period of time, as happens around every 100,000 years. Other parts of Africa experienced severe drought. These environmental differences could be responsible for most of the physical variations in Homo sapiens.

This new perspective was dubbed “African multiregionalism” by Chris Stringer of the Natural History Museum in London. It looks at early human life as having risen across Africa in a number of places at once, not just courtesy of one small population in the savannah.

New evidence suggests that today’s humans have originated as early as half a million years ago, when they split from the Neanderthals. The species kept changing for hundreds of thousands of years, creating new technologies and achieving cultural milestones, like coming up with art. Humanity has entered its current era, known as the Holocene, around 12,000 years ago when Earth’s climate stabilized, allowing for the birth of farming.That’s when the mix of modern and ancient features in humans stops and only the modern ones continue to persist, writes Scerri.

As it took almost 500,000 years to shape the modern human, it’s a wonder how far we’ve come in the short period of time since. What will humans be like half a million years into the future?

Related
Neuropsych
Memory and the benefits of forgetting
Forgetfulness isn’t always a “glitch” in our memories; it can be a tool to help us make sense of the present and plan for the future.
The Learning Curve
5 Stoic quotes to help you through difficult times
“We suffer more often in the imagination than in reality.”
Starts With A Bang
The good reasons scientists are so hostile to new ideas
Many people out there, including scientists, claim to have discovered a series of game-changing revolutions. Here’s why we don’t buy it.
The Present
Climate change is altering the chemistry of wine
Smoke taint from wildfires is gross, even to wine amateurs.
13.8
Could a hidden variable explain the weirdness of quantum physics?
We have searched and searched but have never found one.
Up Next
Technology & Innovation
We have greater moral obligations to robots than to humans
We’re directly responsible for our robots’ joy, suffering, thoughtfulness, and creative potential.