What is the relationship between lobbying and the way our government views climate change? A comprehensive new study says it’s like anything else that lobbyists spent egregious amounts of money on – the truth gets buried somewhere deep under the money.

Between 2000 and 2016, over $2 billion was spent on lobbying related to climate change legislation, constituting 3.9% of the overall lobbying expenditures during that period.As you can guess, the vast majority of that spending was carried out by fossil fuel and transportation corporations, utilities, and related trade associations.

What the study by Drexel University environmental sociologist Robert J. Brulle showed is that the expenditures had a direct link to the likelihood of passage of any meaningful climate legislation. For example, despite the introduction of a number of major bills that would curb carbon emissions in the U.S, none of them have been passed.

For his study, Brulle analyzed data from mandatory lobbying reports made available on the website Open Secrets.

How do lobbyists interact with the government officials they are trying to influence? They do so in a number of sophisticated ways – by providing information or background materials to the decision-makers themselves, monitoring ongoing activities in the policy area in question, and offering expertise and knowledge to influence the media and how decision-makers view the policy issue. They fund think tanks, mobilize the grassroots and conduct PR campaigns. The lobbyists also testify before Congress, fundraise for politicians they prefer, and draft actual legislation.

As the study points out, the lobbying organizations are trying to “saturate the ‘intellectual environment,’ overloading the minds of policymakers and their staff so that when the time comes to make a decision, certain arguments and frames will come to mind more quickly than others, and certain ideas and solutions will have been pre-legitimated by a wide range of trusted experts.”

All of this costs a lot – direct lobbying expenditures tend to run between $3 billion and $4 billion annually. And that number doesn’t include all the spending on political action committees, media or public relations, which would likely cost around the same amount.

Here’s how the lobbying on climate change legislation looks like since 2000: 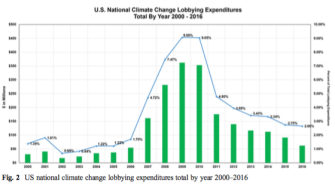 And here’s where you can see the how the influence of the environmental organizations is completely dwarfed by the lobbying of the fossil fuel industry, as well as the utilities and transportation companies: 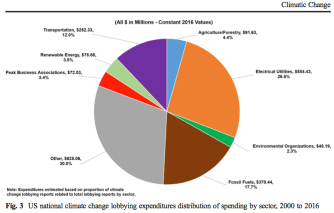 In a further demonstration, here’s how the lobbying expenditures on climate change issue compare by industry: 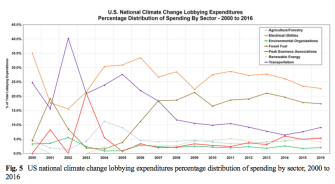 As the study concludes, “the environmental organization and the renewable energy sectors were outspent by the corporate sectors involved in the production or use of fossil fuels by a ratio of approximately 10 to 1.”

The study also shows that climate change legislation spending tends to peak when Democrats are in control of the Congress, as they are more open to passing such bills. Republicans are viewed as unfavorable to that kind of legislation so the lobbying efforts decrease when they are in power.

The paper makes the point, however, that lobbying doesn’t necessarily result in the outcome that the lobbyists want since there are other factors in play as well like social movements and media coverage. Still, having the government’s ear means that only one side of the issue is consistently being presented.

What the analysis alsoillustrates clearly is the fact that science advocacy efforts are limited and not well-funded, finding that “climate lobbying expenditures by environmental organizations constitute only 3% of total lobbying expenditures.” This results in less accurate scientific information being introduced into the decision-making process. Critics have portrayed lobbying as “a danger to democracy because it creates elite networks of decision-makers that exclude the general populace.” It’s not hard to see how that is achieved.

“Lobbying is conducted away from the public eye,” explained Brulle. “There is no open debate or refutation of viewpoints offered by professional lobbyists meeting in private with government officials. Control over the nature and flow of information to government decision-makers can be significantly altered by the lobbying process and creates a situation of systematically distorted communication. This process may limit the communication of accurate scientific information in the decision-making process.”

Check out the new study in the Springer Journal “Climatic Change”.

A Cosmic First: Ultra-High Energy Neutrinos Found, From Blazing Galaxies Across The Universe

In this artistic rendering, a blazar is accelerating protons that produce pions, which produce neutrinos and gamma rays. Neutrinos are always the result of a hadronic reaction such as the […]