Editor’s Note: This article was provided by our partner, RealClearScience.

The doctor will see you now.

The Black Death, caused by the bacterium Yersinia pestis, wiped out 30 to 50 percent of Europe’s population between 1347 and 1351. But, this is just the most infamous of the little microbe’s shenanigans. Y. pestis, which is one-millionth our size, has caused three major pandemics and continues killing people to this very day. The plague gets such a bad rap because it represents some of the greatest tragedies to ever befall the human race.

Can anything nice be said about the plague? As it turns out, yes. A new analysis by Sharon DeWitte in PLoS ONE suggests a silver lining: Black Death survivors and their descendants were healthier and longer-living, meaning that the plague served as a gigantic natural selection event eliminating many of the weak and frail from the population.

Because so many people died, it was widely assumed that the Black Death killed indiscriminately. But that’s not true. Elderly people and those who were in poor health to begin with were much likelier to die. To be sure, the plague kills healthy people, too. But, as with most infectious diseases, healthy people have a better chance at surviving. Ironically, the Europeans who made it through the Black Death inherited a much better world. Food prices dropped, labor wages increased, and there was a boost in the standard of living. 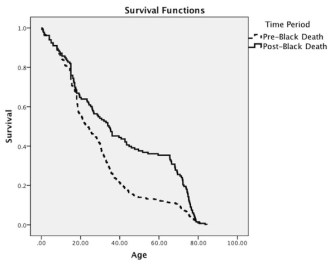 Once again, the adage, “What doesn’t kill you makes you stronger,” turns out to be accurate.

Even adding just one extra particle makes all the difference. “Art has a way of confronting us, of reminding us, of engaging us, in what it means to be human, […]