In 2001, Jediism was the fourth biggest religion in England and Wales. That same year, fully 1.5% of New Zealanders came out as adherents of the Force, the highest percentage anywhere in the world. Had the new religion’s meteoric rise persisted, it would surely have been one of the world’s biggest by now. But the wave crested. Where have all the Jedi gone?

Jediism is not a ‘real’ religion. It is based on the spirituality of the Jedi Knights in the fictional Star Wars universe. But how exactly is the Jedi faith any less real than other religions? Aren’t they all, in essence, equally fictional? That of course was the point being made by all those people filling in ‘Jedi’ on their census forms. Spreading like wildfire from 2001 onwards, the Jedi census drive was one of the first ‘viral’ online phenomena to go truly global.

In 2001, the Australian census noted more than 70,000 individuals as Jedi, or 0.37% of the population. The Canadian census that same year recorded 21,000 Jedi Knights. No less than 53,000 New Zealanders listed themselves as Jedi, leading to the aforementioned record 1.5%. With those numbers, Jediism was New Zealand’s second-largest religion, ahead of Buddhism and Hinduism (both 1.2%).

In 2001 in England and Wales, 390,127 people (almost 0.8%) identified as Jedi – more than Sikhism, Judaism and Buddhism. In absolute numbers, it was the biggest Jedi population in any country. Jedi was Britain’s fourth religion, after Christianity (70%), Islam (3.1%) and Hinduism (2.1%). The Jedi Jerusalem was Brighton, where a whopping 2.6% of those surveyed adhered to the Jedi faith.

This map is a snapshot of Jediism’s high water mark in Britain. The Force was particularly strong in southern counties, and noticeably absent in the north. The most Jediist counties were Dorset, Hampshire, East Sussex, Surrey, Berkshire, Buckinghamshire, Oxfordshire and Greater London. Another hotbed straddling the Severn is comprised of one Welsh county, South Glamorgan, and an English one, Avon. In all these counties, Jedi religionists made up between 0.93 and 1.40% of the total. 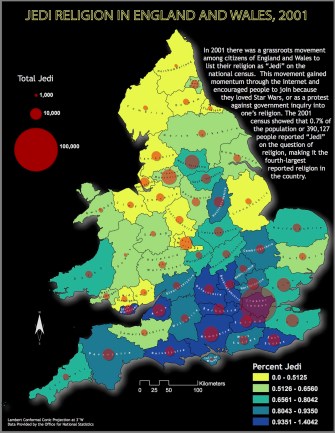 Although there’s a noticeable northward salient through central England, with Jedi centres in Nottinghamshire and to a lesser extent in South and West Yorkshire, the north is weak in the Force. That pattern is repeated north of the border: only 0.28% of Scots declared themselves to be Jedi in the 2001 census.

The Jedi census movement may be a fading fad, but the Star Wars religion still has some real-life rallying power. In 2015, Turkish students protested the building of mosques on their campus by demanding the construction of Jedi and Buddhist temples as well.

Related
Starts With A Bang
NASA’s Habitable Worlds Observatory to finally answer the epic question: “Are we alone?”
NASA has finally chosen which flagship mission, like Hubble and JWST, will launch in ~2040. Detecting alien life is now a reachable goal.
Health
The scientific highs and lows of cannibinoids
Hundreds of these cannabis-related chemicals now exist, both natural and synthetic, inspiring researchers in search of medical breakthroughs.
Strange Maps
The horrors of World War II air war, in one stark map
This graph shows how badly German cities were hit by Allied bombing raids.
Hard Science
Subatomic ghosts shed new light on the structure of protons
A Fermilab study confirms decades-old measurements regarding the size and structure of protons.
The Present
The Taoist philosophy behind Alibaba, China’s e-commerce giant
Alibaba has played a key role in China’s meteoric economic rise.
Up Next
Surprising Science
Want to Teach the Difference Between Correlation and Causality? Use Heavy Metal.
All teachers should strive to instill in their students the ability to think rationally and clearly communicate their conclusions. One educator has recommended using heavy metal as a focal topic in teaching sound thinking.