Want to send a letter but don’t have the full address? Why not draw a map of your destination on the envelope? As in this case, it just might work.

A tourist back in Reykjavik from a trip to western Iceland wanted to send a thank-you note to a couple he met in the town of Búðardalur. But he didn’t have their addresses, nor even know their names. Refusing to throw in the towel, he wrote down a detailed description of the couple on the envelope – a horse farm with an Icelandic/Danish couple and three kids and a lot of sheep – and drew a map of the area.

The map shows Búðardalur, on the shore of the Hvammsfjörður, and the numbered roads connecting the remote location to therest of Iceland. A red dot on the north shore of the fjord marks the site of the horse farm. The sender had another clue for the local mailman: The Danish woman works in a supermarket in Búðardalur.

The letter reached its destination. Which is nice, but perhaps not so surprising. Iceland’s human geography played in its favour. It’s a lot easier to find someone in Iceland, because there are so few other Icelanders to confuse them with. Cleveland, Ohio has more inhabitants than the whole of Iceland, which is home to a third of a million people. Over two-thirds of those live in and around the capital, Reykjavik. The remaining hundred thousand people are scattered in tiny, mostly coastal settlements across the vast, treeless island, which is about the same size as Kentucky.

Búðardalur is a small town with a long history. It dates from the time of the first Norse settlement of Iceland, in the late 9th century. Nearby is the birthplace of Erik the Red, who discovered Greenland from there. His son Leif Erikson went even further west and landed in America, almost five centuries before Columbus.

Despite its thousand-year history, Búðardalur has no more than 270 inhabitants. It’s a service centre for the wider region, with a petrol station, hair salons, a pub/restaurant, a coffee shop, a health care centre, a liquor shop, a garage – and yes, a supermarket. With, if the letter is still up to date, at least one Danish employee. 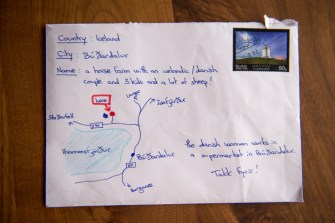 But just how recent is the letter? It was stamped on the 29th of March 20– (last two digits unreadable), so anywhere between half a year and a just over a decade and a half. Old enough, in any case, to have become something of an evergreen, surfacing at least twice on Reddit, here and here.

The map-as-address is a rare cartographic example of a fairly frequent postal phenomenon: cryptic addressing.

A cryptic address goes against convention and common sense. Both dictate that a letter should be addressed as precisely as possible. Usually with the name of the addressee at the top and the largest relevant administrative unit – be it state, province or country – at the bottom. In between: as few lines as possible plotting a pathway between both, with the aid of a town name and post code, a street name and house number.

By necessity or design, cryptic addresses leave out much of the required information. The letter-writer might not remember the entire address, but decide to take their chances anyway. And/or they might be reasonably sure that the mail delivery service will figure out the letter’s final destination anyway. Another possibility is that they see cryptic addressing as a sport – a good-natured battle of wits with the postal service.

One such scribe is James Addison, a graphic designer based in Poole, who decided to test the problem-solving capacity of the Royal Mail by sending out envelopes using an acrostichon, a drawing of the building, or even an address rendered entirely in Morse code as directional clues. See this video and this article for more on his postal puzzlers.

Irishman David Curran is a kindred spirit. He runs a Tumblr blog called Me versus An Post – the name of the Irish national postal service – on which he details attempts to send mail in the weirdest ways possible, both by others and by himself. In the latter category are attempts including an address using a wheel mechanism, a jigsaw puzzle and a Moebius strip. As mentioned in this article in the Journal, Mr. Curran got his inspiration from a paper on Postal Experiments published in the Journal of Improbable Research, for which the authors, in order to test the limits of the U.S. Postal Service, sent a variety of unpackaged items to U.S. destinations, appropriately stamped for weight and size: “We sent items that loosely fit into the following general categories: valuable, sentimental, unwieldy, pointless, potentially suspicious, and disgusting”.

Third of a kind is Harriet Russell, a British artist who used the Royal Mail as an involuntary partner in her mail art project. Her envelopes contain addresses rendered as mazes, puns, wordplay, anagrams, etc. In 2005, she filled a book with the most curious examples. You can still orderEnvelopes: A Puzzling Journey through the Royal Mail online, but don’t count on the computer-generated address label on your delivery to be as witty and clever as the contents of the book.

The comments section of the Reddit thread figured out the likeliest location for the mysterious horse farm in western Iceland – here – and mentions quite a few other examples of the “and yet it arrived” trope (1). Here are a few notable ones – of which curiously many occur in Ireland.

(1) Several commenters mention the what3words solution to addressing problems, now apparently adopted by the Mongolian postal service, and that system’s suggestion as the address for the horse farm: shapeless barber goalpost. See also #761.

Hospitals are starting to get serious about just how noisy they can be for patients trying to heal.