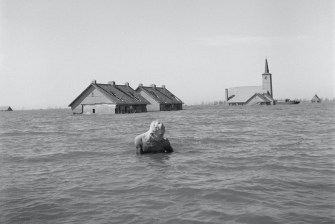 The top of a 4.5-m (15-ft) statue, some rooftops and a church spire are all that remains above water in Wieringerwerf, near Amsterdam, during the Wieringermeer flood of 1945.

Climate change is real, and it’s bad. It’s also gradual and impersonal. That’s why it’s both tempting and easy to stick your head in the sand. Do that long enough, though, and you’re likely to drown, as sea level rise (SLR) catches up with you.

Here’s something that might shock you into action: A plan for a giant dam to protect 15 European countries from those rising seas. The project’s scale is unprecedented. Its cost phenomenal. But it’s still cheaper than all the alternatives—including doing nothing. All the alternatives except one: Taking action now against climate change.

Here’s how the situation looks today:

“The magnitude of that threat demands a solution that reflects the scale of the problem,” write oceanographers Sjoerd Groeskamp and Joakim Kjellsson. In a paper that has just been published in Bulletin of the American Meteorological Society, they propose the construction of a Northern European Enclosure Dam (NEED), that would disconnect the North and Baltic Seas from the Atlantic Ocean, thus protecting 15 countries (and millions of people) from the dangers of SLR. 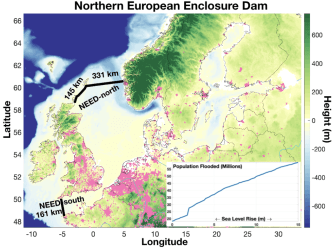 The logistics of their proposal are dizzying:

Comparing NEED to alternative solutions—managed retreat, country-by-country mitigation—the oceanographers arrived at an alarming conclusion: “A solution as considerable as NEED might be a viable and cost-effective protection measure for even a few meters of SLR.” 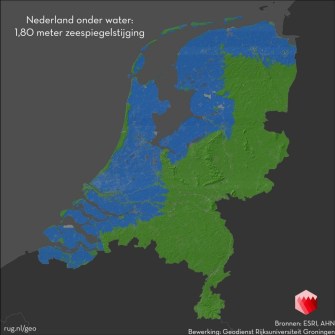 What would happen to the Netherlands if the sea level rose by 1.8 m (6 ft): The blue area would flood.

So, how do those alternatives pan out, exactly?

Since so much of most countries’ population and economies is located at or near the coast, the cost of doing nothing is extreme: Up to 10 times as high as the main alternatives, protection and retreat. Being scientists rather than politicians, Groeskamp and Kjellsson only considered the latter two.

Indeed, despite its massive scale and massive cost, NEED would be the cheapest way to mitigate SLR.

“For SLR of even a few meters, we expect that the integrated cost of individual protection of all 15 countries together far exceeds the costs of constructing NEED,” write the paper’s authors. 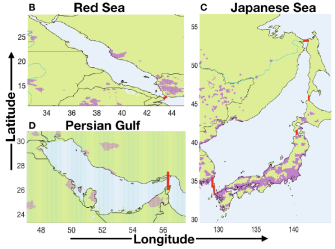 Some other parts of the world where solutions similar to NEED could help safeguard coastal areas from sea level rise.

They are not presenting NEED as a panacea, however. Blocking off the North and Baltic Seas from the Atlantic Ocean will have far-reaching, and potentially serious consequences for the region’s ecosystems, economies and societies.

“Certain consequences will oppose people to the idea of constructing NEED. Alternative solutions, however, will undoubtedly also lead to irreversible environmental changes,” write Groeskamp and Kjellsson. Ideally, neither NEED nor its alternatives should be necessary, they say: “We hope that the mere suggestion of NEED as a solution (…) may instigate a thought process that sparks public awareness of the threat that SLR poses, possibly clearing a path for global-scale action to address long-term climate change-related threats.” Without such action, “SLR will lead to unavoidable and irreversible loss of physical places, cultural heritage and environmental and ecological systems.” Right now, NEED is a warning. But if nothing—or too little—is done, it may still become the least-worst option for saving north-western Europe from drowning.

‘NEED – The Northern European Enclosure Dam for if climate change mitigation fails’ by Sjoerd Groeskamp and Joakim Kjellsson, was published in the January 2020 Bulletin of the American Meteorological Society. Read it in full here. Image of Wieringermeer flood found here on Wikimedia Commons. Map of Netherlands flooding found here at Oog TV.

Tags
anthropoceneclimate changeenvironmentmapoceans
In this article
anthropoceneclimate changeenvironmentmapoceans
Related
Hard Science
200 years of exploring Antarctica
What we’ve learning from the world’s coldest, most forbidding, and most peaceful continent.
Life
Most of the seafloor is a thick graveyard of ooze
Each year, several trillion pounds of microscopic silicon-based skeletons fall down the water column to pile up into siliceous ooze.
The Present
How California could save its rain instead of letting it drain into the ocean
Why can’t more rainwater be collected for the long, dry spring and summer when it’s needed?
Life
“Virivores” discovered: Microbes that survive on a virus-only diet
Carnivores, herbivores, omnivores — and now virivores.
Health
5 biotech trends to watch in 2023
From synthetic biology to xenotransplantation, biotech will continue to march forward in 2023, in part powered by data and AI.
Up Next
Life
What will the first weed degree program in the U.S. look like?
Check out the curriculum for the nation’s first cannabis-focused bachelor’s program.