Even a month ago, Tabarnia did not exist. Now the region has a flag, a map – and the intent to secede from Catalonia, if Catalonia secedes from Spain.

New elections have failed to defuse the Catalan crisis. At the vote on 21 December, the three pro-independence parties retained their majority in the Catalan regional parliament. The government they will be forming from today could take the rich, northeastern region of Spain once more to the brink of independence.

But something has changed since Catalonia’s latest attempt at slipping Spain’s surly bonds. Until last month, opponents of Catalan independence – both inside and outside Catalonia – seemed powerless to stop the region’s geopolitical drift away from Madrid. Now they have found a rallying cause: autonomy for Tabarnia!

The name may sound as if it has an ancient pedigree, but it is no more than a portmanteau for Tarragona and Barcelona, and a very recent one at that. While recent polls and elections have shown clear majorities pro independence in most of Catalonia’s regions, voters in the coastal strip from Tarragona to Barcelona have rejected it. 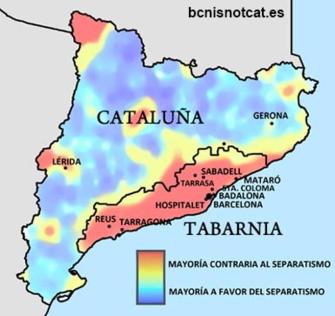 This is Tabarnia, and the mirror it holds up to Catalan separatism not only mocks its demands, it could eventually prove the most effective way to frustrate them.

Where Catalan nationalists proudly proclaim that ‘Catalonia is not Spain’, Tabarnia replies that ‘Barcelona is not Catalonia’. Tabarnians also echo the Catalan complaint that they contribute much more to the state coffers than they get back.

The fictional region went viral on 26 December, a few days after those latest elections confirmed its anti-secessionist exceptionalism, and a petition in favour of independence from Catalonia garnered tens of thousands of signatures in no time (1). 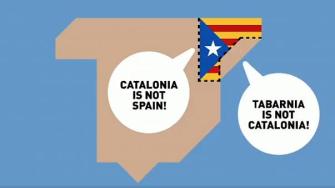 Last Tuesday, Tabarnia even got a president. Albert Boadella (74) is a theatre director who left Barcelona for Madrid in 2007 claiming he was being boycotted by Catalan nationalists. He swore the oath via video link from his ‘exile’ in Madrid, a dig at the insistence of Carles Puigdemont to be sworn in as Catalan president from his exile in Brussels.

How far will Tabarnia go? “As far as the secessionists have gone”, said Jaume Vives, Tabarnia spokesman Jaume Vives told the Guardian. Indeed, some Tabarnians want to do more than hold up a mirror to Catalan nationalism and are campaigning for a referendum in October 2019. They effectively want to create the Autonomous Region of Tabarnia, which could decide to remain part of Spain in case Catalonia – or what’s left of it – goes for independence.

“Tabarnia will become their nightmare just as they have become ours”, said Vives. 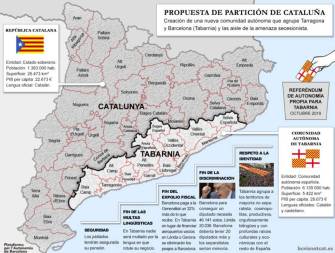 This map shows the proposed flag for the Autonomous Region of Tabarnia, and lists a few arguments in favour if its establishment: pension security, an end to fines for businesses that do not use Catalan, a redress of the fiscal and electoral imbalance to the disadvantage of Barcelona, and respect for the cosmopolitan, multilingual and pro-Spanish nature of the region. Tabernia would have 6.1 million inhabitants, the rest of Catalonia only has 1.4 million.

(1) Counter-separatism as a remedy for (or at least vengeance against) separatism is not unprecedented in history. West Virginia seceded to remain in the Union when Viriginia joined the Confederacy. Transnistria and Abkhazia tore free from Moldova and Georgia respectively when those two former Soviet republics declared independence. The (virtually unrecognised) independence of those regions is maintained by Russian troops.

Related
Neuropsych
Psychology studies that go viral are likelier to be bogus
A new 20-year analysis of over 14,000 psychology studies finds that a study’s media coverage is negatively linked to its replicability.
The Future
How a device transmits radio waves with almost no power
Apart from the energy needed to flip the switch, no other energy is needed to transmit the information.
The Present
Radical idea: Redraw the U.S. map as a nation of city-states
While cities drive national economic growth, their political geography means they cannot effectively deal with inequality, poverty, and other socioeconomic problems.
The Learning Curve
Why do high IQ people stagnate in their careers? Emotional intelligence
Research suggests that emotional intelligence is more vital for success than IQ.
The Present
Even in the age of AI, some problems are just too difficult for computers
Computers are growing more powerful and more capable, but everything has limits
Up Next
Health
DNA analysis may have finally revealed what killed 15 million Aztecs
15 million Aztecs were probably killed by a form of salmonella the Spanish brought from Europe.