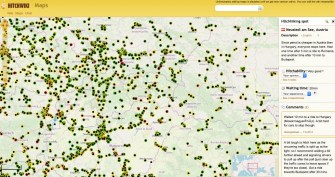 User-based tips and tricks on how to hitch a ride throughout Europe (and the rest of the world).

If you’ve never stuck out your thumb to get somewhere, nor picked up someone who did, you’re now part of the overwhelming majority. Nevertheless, like vinyl, hitchhiking has survived the predictions of its demise and occupies a small but thriving niche.

There’s an entire wiki dedicated to the practice, including a map detailing hitchhiking spots around the world, rating each for ‘hitchability’ and providing a user-generated average waiting time for each spot.

Based on that information, Abel Sulyok has produced this map, showing average waiting times across Europe as experienced by hitchhikers themselves. The map provides a curious overview of the continent’s hitchhiking landscape, indicating where it’s easier to hitch a ride, and where your thumb is going to be sore before you’re picked up. 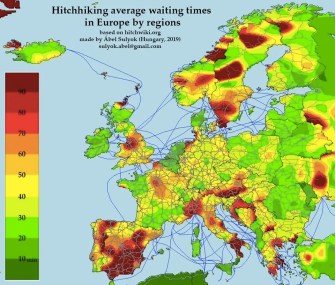 Hitchhiking success (or failure) doesn’t just depend on your technique or appearance, also on your location.

In areas colored darkest green, you’re off the street in 10 minutes or less. Lightest green: half an hour. Things turn yellowy in areas where you have to wait up to an hour and then change to red for times up to 90 minutes. If it’s more, you’re in a deep burgundy.

As this map shows, your hitchhiking success depends not just on your presentability, but also on where you present yourself. 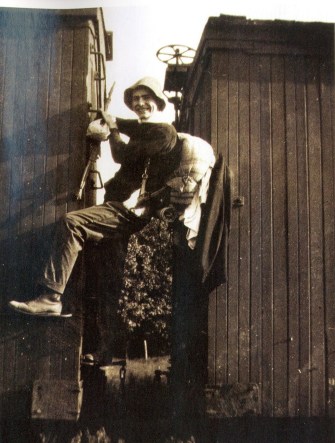 A young Ernest Hemingway (17 in 1916), freighthopping to get to Walloon Lake.

Hitchhiking has a long tradition in the U.S. Its direct ancestor was freighthopping. After the Civil War, if you were looking for work but without your own means of transportation, you’d hop on freight trains to travel long distances.

While lots of people kept riding the rails throughout the 20th century (2), the rise of the automobile provided a much safer and more flexible means of hitching rides to faraway destinations.

Hitchhiking (3) really took off after 1929, when the Depression both limited people’s options to buy their own cars and increased their need to move around to find work. Under the New Deal, the US Government even set up a Transient Bureau that helped both hobos and hitchhikers.

By one estimate in 1937, at least one adult American male in 10 had hitched a ride at least once. A Gallup poll conducted during World War II, when fuel-rationing and car shortages were keeping hitching popular (and patriotic), indicated that nearly half of all Americans had picked up a hitchhiker. 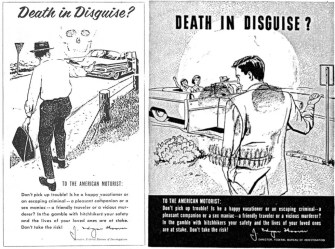 However, there were problems with hitchhiking almost from the start. Early on, public opinion swung against aggressive hitchhikers, sometimes standing in the middle of the road, practically “demanding a ride”. Reports of crimes – real or otherwise – committed by hitchhikers predisposed the public and the authorities against it.

After WWII, laws and law enforcement further discouraged the practice, as exemplified by these FBI posters, warning drivers against hitchhikers: They could be “a happy vacationer or an escaping criminal – a pleasant companion or a sex maniac – a friendly traveller or a vicious murderer.”

In the 1970s and 1980s, a slew of highly publicized crimes involving hitchhikers (to name just one: the Santa Rosa Hitchhiker Murders, 1972-73) – and a few movies playing on the fears they generated (The Texas Chainsaw Massacre, 1974; The Hitcher, 1987) – helped end its heyday. 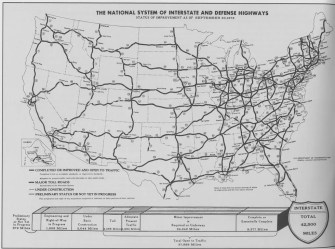 The Interstate Highway System in 1976

Add to that the generalized sentiment nowadays that ‘stranger’ equals ‘danger’, and the demise of hitchhiking seems logical. From the 1920s right up to the 1980s, thumbing a ride was a fairly common way to get around. These days, it’s the option of last resort.

But perhaps the main reasons for hitchhiking’s decline have less to do with moral panic, more with fundamental changes in infrastructure. For one, there’s the post-war rise of the Interstate Highway System: Bigger, faster roads that are unsuited to hitchhiking.

The biggest underlying factor may be the rise of car ownership. The percentage of US households without a car has steadily declined, from about 50% in 1941 to less than 10% today (4). If you have a car, you don’t need to hitch a ride.

This map was produced by Abel Sulyok, based on data from Hitchwiki. Image found here on Reddit. Reproduced with Mr Suyok’s kind permission. Many thanks to Katrien Luyten for pointing it out. It would be interesting to see a North American version.

For more on hitchhiking’s decline, check this great article by Dave Margulius, first published in the Washington City Paper in 1988.

Considering all the scare stories, hitchhiking is much safer than you’d think. Nevertheless, if you’re considering thumbing your way across the world, read up on some practical and safety tips first.

(1) A short dictionary of early 20th-century vagrancy. Hobo: someone traveling to look for work. (Term possibly derived from hoe-boy, i.e. ‘farmhand’, or an abbreviation of homeward bound). Tramp: someone traveling, but not looking for work. (From tramping, i.e. long-distance walking, as this was their main means of getting about). Bum: someone neither looking for work nor traveling. (From the German bummler, ‘loafer’).

(2) There are still enough hobos around to animate a National Hobo Convention, every August since 1900, in Britt, Iowa. Nevertheless, the lifestyle is definitely fading – see this article about The Last Great American Hobos.

(3) Curiously, the term is much older than the automobile. It describes the practice of ‘horse-sharing’ in the Old West. According to an article in the American Motorist in 1978, “One man would start walking while the second man rode the horse to a predetermined spot. He would hitch the horse to a tree and walk on. When the first man [arrived], he would take the horse and ride past the other man to another predetermined spot.”

(4) In 2010, 91.1% of American households had at least one car. In 2015, that figure had dropped slightly to 90.9%. Trendwatchers attribute this first decline in decades to millennials in big cities preferring car ‘usership’ over car ownership. However, the U.S. Census figure for 2017 indicates car ownership has gone up again, to a record 91.2%.

Tags
adventureEuropefearstrange mapstransportationtravel
In this article
adventureEuropefearstrange mapstransportationtravel
Related
High Culture
5 great (and underrated) songs about cities
Most popular songs are about love and heartache. But some great songs — albeit underrated and perhaps a bit weird — are about the cities we love.
High Culture
Machu Picchu has changed Peru — for better and for worse
If tourism is the lifeblood of the Peruvian economy, then Machu Picchu is the heart pumping that blood — in sickness and in health.
Strange Maps
The Viking woman who sailed to America and walked to Rome
The amazing life of “Gudrid the Far-Traveled” was unjustly overshadowed by her in-laws, Erik the Red and Leif Erikson.
The Present
The real reasons we turn on “airplane mode” when we fly
Shouldn’t “flight mode” be obsolete?
Strange Maps
An interactive map with bizarre poems about England
Is the dumpster in the alley worthy of a poem?
Up Next
Starts With A Bang
The Ring Nebula Is Much, Much More Than A Ring
If we could see in three dimensions instead of two, we’d never have thought otherwise.Perhaps the most famous sight of a dying star is the Ring Nebula, discovered in 1779.The […]