This could be the first official map produced by the European Union to exclude the UK. But it is also an inaccurate one: the UK is still a member state of the EU.

But Britain hasn’t left yet. By invoking Article 50 of the Treaty of Lisbon, May triggered a process that gives both sides two years to reach an agreement. Meaning that Britain is scheduled to leave the EU on 29 March 2019. Until that time, the United Kingdom remains a full member of the European Union.

It is no secret that hardline brexiteers would rather leave today than tomorrow, and ‘crash out’ of the EU, even if that means falling back on the most rudimentary of agreements for trade and cooperation with ‘EU27’ – shorthand for the EU minus the UK.

Now it seems that sentiment is reciprocated in the highest circles of the EU bureaucracy in Brussels. See the Reflection Paper on the Social Dimension of Europe (1), published by the European Commission on 26 April 2017. On page 9, it contains a telling map of the European Union. 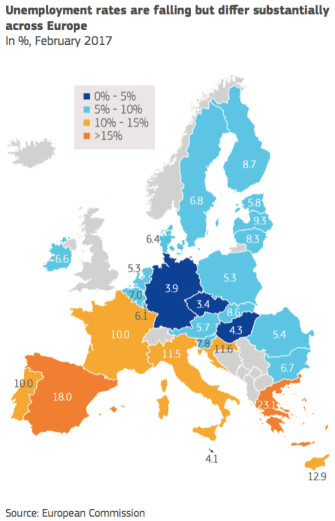 Those non-members include the usual suspects: Iceland, Norway, Switzerland, Andorra, Albania and five of the seven post-Yugoslav states (Bosnia, Serbia, Montenegro, Kosovo and Macedonia; Slovenia and Croatia have acceded to the EU). Squeezed between Poland and Lithuania is the Russian exclave of Kaliningrad. Russia proper and other countries in eastern Europe, the Middle East and North Africa are whited out.

The UK now joins the grey countries on the map. But this is not a map produced to satisfy the wishful thinking of those hardline Brexiteers who can’t wait for 2019. This is an official publication of the European Commission, one of the highest institutions of the European Union. Despite the fact that, for almost two more years, the EU still includes Britain.

(1) As pointed out by a reader of this blog, the Reflection Paper deals explicitly with the future of the EU without the UK, hence the exclusion of Britain from the Union, both in the stats and on the map. This was not mentioned in an earlier version of this article – not to inflame sentiments against the EU, but to focus on the fact, remarkable in itself, that an official EU publication  has published a map of the Union without Britain, possibly for the first time, and almost two years before Brexit actually happens.

Related
Hard Science
Some earthquakes last for seconds, others for minutes — and a few for decades
What do you call it when the Earth shakes for three decades?
Sponsored
What childhood “money story” is shaping your financial behaviors?
Here are the signs that you inherited “money anxiety” from your parents.
The Present
The “maritime Indiana Jones” who salvages shipwrecks now wants to tow icebergs
Simple physics makes hauling vast ice chunks thousands of miles fiendishly difficult — but not impossible.
Neuropsych
Inside the brains of aging dogs
In a citizen science project, thousands of pet dogs are helping scientists to understand what happens to memory and cognition in old age.
Neuropsych
The most common source of awe might surprise you
It’s us.
Up Next
Surprising Science
8 daily mindfulness practices that will boost your immune system
See if these practices can improve your life.