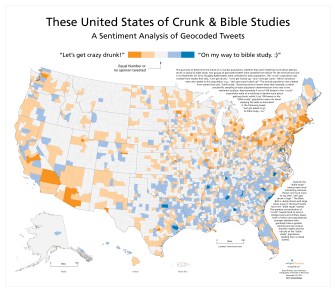 One nation, divided between the bible and the bottle

America is not one nation – not even two, but a seemingly endless procession of opposites: red vs. blue, black vs. white, coastal vs. heartland, Hispanic vs. Anglo, millennials vs. analog natives. Of course, the precise course and depth of each of those fault lines depends on which type of data you decide to crunch, and how.

Here is a map of the United States divided into two very different – though perhaps not entirely mutually exclusive – demographics. In one corner: ‘crazy drunk’ – or ‘crunk’, if you’re into the whole brevity thing. In the other: ‘bible study’. The raw data for this map was spooned out of the bubbling vat of megatrends and metadata that is Twitter.

“The goal was to determine the mood of the country’s population,” the mapmakers explain, “whether they were tweeting more about getting drunk or about going to bible study.” One might question the methodology of their survey: perhaps the national mood has more than just those two settings; but let’s run with this and see what happens. 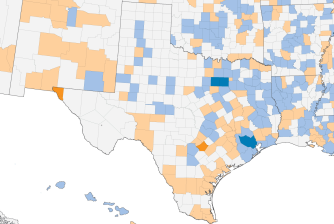 A Texas three-way: bible, drinking, and neither (or both?)

Not every mention in either category was genuine. In their sentiment analysis, the surveyors found an error rate of 4% in the ‘crunk’ category (i.e. “a mocking or derisive tone about getting drunk”), and 2% in among ‘bible study’ tweets.

The map shows the results of the survey, plotted in various shades of colour: light and dark orange for a slighter or stronger preponderance of ‘crunk’ tweets, light and dark blue for a smaller or larger plurality of ‘bible study’ tweets, and grey for areas where both categories were equal in number, or where too little data was available either way. 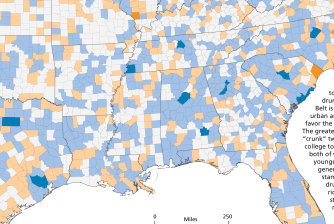 The South is overwhelmingly blue, for ‘bible studies’

Not entirely unsurprisingly, “the Bible Belt is clearly shown (in blue), and large urban areas in the South easily favour the ‘bible study’ tweets”. On the other hand, “the greatest concentration of ‘crunk’ tweets tend to exist in college towns and military bases, both of which are populated by younger twitterers.”

Interesting to note are the general rules, and their exceptions. 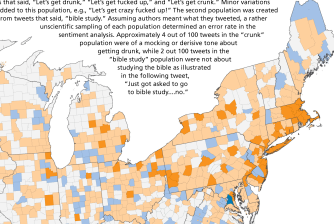 Crunk Megacity: a zone from Boston to Washington DC is dark orange 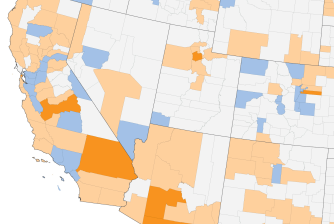 Orange Utahns and praying in Vegas

This map, created by outrageGIS.com, was sent in to a competition back in 2013 for the best visualisation using a dataset relating to the seven deadly sins. The competition was launched by Floating Sheep, a (now dormant) online magazine devoted to the analysis cartographic representations of geolocated data.

Map and excerpts reproduced with kind permission of Boyd L Shearer. Find his website at OutrageGIS.com.

Tags
addictionGodhealthmapmoralitypublic healthreligionspiritualityunited states
In this article
addictionGodhealthmapmoralitypublic healthreligionspiritualityunited states
Related
High Culture
Why are flood myths so common in stories from ancient cultures around the world?
Could the prevalence of flood myths around the world tell us something about early human migration or even the way our brains work?
The Future
Space travel will radically change human psychology and spirituality
We are traveling in a realm that once exclusively belonged to the gods. Space travel will force humanity to rethink everything.
The Past
How the death of alchemy gave birth to modern science
Far from practicing witchcraft, the experimentation of medieval alchemists helped bring about the Scientific Revolution.
Thinking
Finding your essential self: the ancient philosophy of Zhuangzi explained
Adopting a healthy scepticism towards inherited ideas means “emptying the container of the Self.”
Starts With A Bang
Science won’t ever make philosophy or religion obsolete
The information we have in the Universe is finite and limited, but our curiosity and wonder is forever insatiable. And always will be.
Up Next
The Present
7 tips on how to boost creativity in the workplace
Turning the office into a place of artistry.