The Weird Geography of Autocomplete Maps 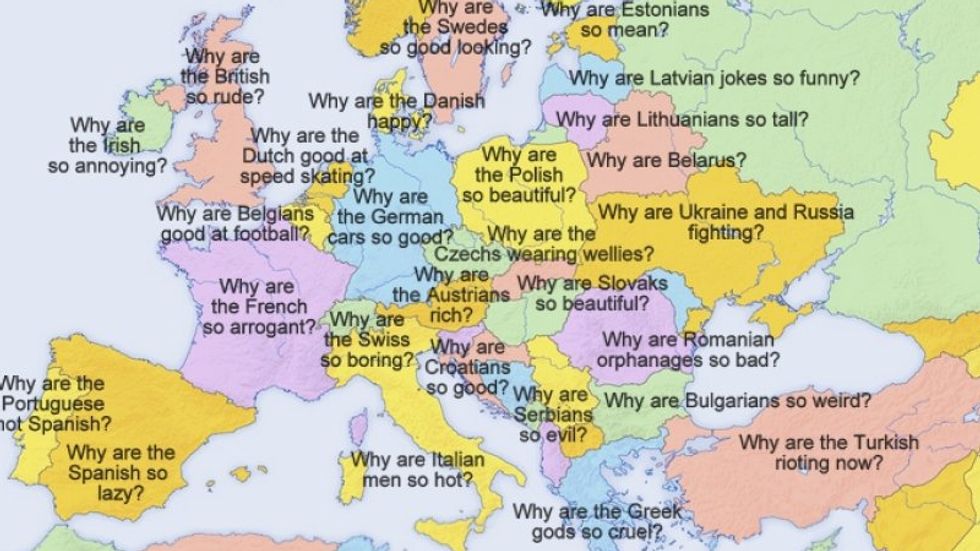 We live in post-truth times, some commenters lament. Wrong! Thanks to the internet, there has never been more truth around than right now. What we do live in, are post-uncertainty times.

Whatever your philosophy or persuasion, a quick Google search will get you plenty of evidence to back it up. The search engine is both confession booth and reference library; it has answers for all questions, from the most existential to the most mundane. And you don't even need to finish your query – Autocomplete will do that for you.

Curiosity has been crowdsourced to give you the most likely end to such basic questions as Where is... (the love, my phone), Who is... (harambe, the next bachelor), What is... (my ip, pokemon go), and How am I... (supposed to live, going to die).

Maps are a particularly fertile proving ground for autocompletion. By showing the most popular online finishes to Why is Kansas so... and other half-finished cartographic conundrums, they provide a socio-geography of unfiltered prejudice, or of unvarnished opinion (whichever you prefer to be true).

Autocomplete maps are addictive, because they provide a statistically relevant glimpse into a huge reservoir of public opinion that before was only glimpsed anecdotally, in jokes, informal conversations and locker-room talk.

The image they present of the areas they cover is often negative and bleak – certainly not in sync with the cheerful blandness presented by the local tourist board, inward investment agency or other instruments of state propaganda.

Take, for instance, this map of the U.S. at io9, that trawled the internet for the one-word autocomplete of this question: Why is [x] so...

Some Autocomplete answers are charmingly naïve. Yes, Montana, the Dakotas, Minnesota and Michigan are cold. Perhaps their location on this map is a clue. Same for hot states like Arizona and Florida. In other obvious news: Wyoming is windy, Kansas is flat.

For some states, the autocomplete ventures into the political: Iowa is democratic; Washington, Wisconsin and Vermont are liberal; Idaho, Oklahoma and Indiana are republican; Missouri is conservative.

And in more than a handful cases, the autocomplete strays into sometimes quite harsh social commentary: Louisiana and Tennessee are racist, Georgia is backwards, Illinois is corrupt, Virginia is strict.

That sounds a lot worse than New Mexico, Arkansas, South Carolina, Kentucky, West Virginia and Mississippi, states which are merely poor. Which is not the same as cheap – i.e. North Carolina. On the other end of that spectrum are Alaska, Hawaii, California, New York and New Hampshire, all expensive states.

Nebraska and Delaware get off with being boring. Oregon and Alabama are good, which is almost the same.

That leaves a handful of states with singular sobriquets: Why is Nevada so empty? Why is Utah so Mormon? Why is Colorado so fit? Rhode Island and Texas get asked rather indelicately about their size, and Maine is called out for its whiteness. Maryland is the only state that gets the rich label.

More singular questions: Why is Alabama so good? Why is Ohio so important? Why is Massachusetts so smart? The most puzzling question, though, is the one both Pennsylvania and Connecticut get: Why are they so haunted?

Here is another take at the U.S. map, the Autocomplete question this time being: How much does [x] cost in [capital city], [state]?

The answers range from the practical (a taxi in St Paul, MN and Atlanta, GA; daycare in Springfield, IL) over the cosmetical (liposuction in Boise, ID; a vasectomy in Tucson, AZ and Pierre, SD; breast implants in Little Rock, AR and Indianapolist, IN) to that fuzzy frontier between legal and lewd (a prostitute in Virginia City, NV and Hartford, CT; weed in Denver, CO and even a pound of weed in Albany, NY).

Other popular searches: abortions, kegs of beer, fishing and liquor licenses, and breast and face lifts. Alaska’s ask is a lot more basic: How much does a gallon of milk cost in Juneau, AL?

Find this map here on The Blaze.

Of course, America is not the only place where you can have some fun with Autocomplete. This map of Europe asks of each nationality: Why are the X …

Scandinavians get a good rap. They are strong, hot, good-looking, happy and good drivers. Other pretty nationalities: Italy, Slovakia and Poland. The Baltics are a mixed bag. Not pretty, but funny: Latvia. Not funny, but tall: Lithuania. Neither, and probably mean because of it: Estonians.

According to this Autocomplete map, the Austrians are rich, the Swiss are boring and the French are arrogant. The Germans? Well, their cars are good. Other indirect slights: the Greek have cruel gods, the Romanians have bad orphanages, and the Portuguese should actually be Spanish.

To the Irish and British who think themselves beloved abroad: most people wonder why you are so annoying and rude, respectively. But the worst Autocomplete is one that isn’t – Why is Belarus? Why indeed. Ouch.

Another autocomplete take on Europe, this time by the Japanese, presents a rather different map of the continent. Apparently the Japanese are convinced that adults and/or children in the Balkans do not cry, or are crazy, or slanty-eyed. French women are bowlegged, Holland is full of old people, and the Poles make cars that rust. In Spain, people sleep on the floor, Estonia has no Islamic terrorism, Russian women are thin, and the British are just so weird.

Japan’s take on its own region? The Chinese have bad manners, Mongolians know who to wrestle, the Philippines are good at English, everyone in Bhutan is happy, East Timor has coffee and Papua New Guinea has cannibals. And half a dozen countries throughout South East Asia love Japan.

Autocomplete can be a fun way to learn something about a country – about its citizens prejudices towards each other, at the very least. But often also quite a bit more. Take this autocomplete map of Brazil. Yes, apparently the people from Amazonas hate those from Para, and a few states seem to have peculiar dialects. But did you know that Rio Grande do Sul wants to secede, that Santa Catarina uses 220V outlets (voltage varies per state, sometimes within a state; 60% of all Brazilians use 127V); that Parana is a.k.a. the Brazilian Russia (cold? Communist?); that people from Sao Paulo have a reputation for being stuck up; and that Minas Gerais is the centre of Brazilian baroque art?

Map found here at Maps on the Web.

China uses Baidu instead of Google, but that doesn't seem to make all that much difference. Some northern provinces are cold, a lot of southern and inland ones are poor. Beijing equals smog and neighbouring Hebei is polluted, Shanghai is exclusionary - but how exactly? Nevermind, Jiangsu clearly is China's #1 province. Although the beauties are to be found in Chongqing. Not very nice: Inner Mongolia beats new recruits, and Guangdong eats monkeys. On the more bizarre side: Hubei is famous for its nine-headed birds (what?) China's Far Western province Xinjian is chaotic, and Tibet is... [no results]. Hmmm. I think we found a crucial difference between Baidu and Google. If you Google Tibet is... the search engine autocompletes that to a country.

The province of Qinghai also returns no results. Why? Well: Qinghai has only a narrow Han-Chinese majority, and both a large Tibetan minority, with historical ties to Tibet, and a large Hui (Chinese muslim) minority, which has rebelled against the Communist government in the past. Not clever, Baidu. If you would just have put boring, or famous potatoes or something, we would never have known.

Here is an autocomplete map of Ireland, replete with the usual praise (Cavan is most generous), damnation (Belfast is awful) and confusion (Ireland is part of the UK), but notable for a poetic description of Galway: Galway is the graveyard of ambition. There, that's next years holiday all settled already.

I didn't find an Autocomplete map of Scotland, but on this Autocomplete map of India, I did find a Scotland of the East: the Indian state of Meghalaya, apparently. Kerala is God's own country, and Karnataka is India's most corrupt state. For rice, go to Chhattisgarh; for cyclones, head to Odisha. Both Himachal Pradesh and Uttarakhand are called Dev Bhoomi, which is the local way of saying: God's own country. Running three states could seem a bit much for one God. Fortunately, India has many.

Many thanks to Parinatha Sampath for sending in that first map.

Got any more cool autocomplete maps? Or did you make one yourself? Cool entries will be posted here as additions. Send to strangemaps@gmail.com.