It’s hard to argue with a map. These two examples of documentary cartography, shocking though they are, may finally spell the end for Australia’s History Wars.

For decades, historians, politicians and just about everyone else with strong opinions on Australian nationhood have argued heatedly about whether or not massacres of the Aboriginal population played a substantial part in the genesis of modern Australia.

In one corner, those who wholeheartedly say yes: the European conquest of Australia was characterised by systemic violence, frequent bloodshed and even genocide. In the other corner, those who argue against malicious intent: technological superiority (of the colonists) and susceptibility to diseases (of the natives) are enough to explain the swiftness and totality of the colonisation process.

If those massacres ever took place on a large scale, there is little to remind  the average Australian of them. Apart from a handful of toponyms that refer to a bloody past (see #744), there currently are only about 20 physical memorials to massacres of Aboriginals across the entirety of Australia. Often, the locations are marked by no more than a plaque or a single boulder.

Enter historian Lyndall Ryan and artist Judy Watson, who each have chosen to document the history of colonial-era bloodshed in maps.

Based at the Centre for the History of Violence at Newcastle University in New South Wales, Ms. Ryan started mapping historical massacres in 2013. A massacre, in her definition, is ‘the indiscriminate killing of six or more undefended people’, and her interactive website lists more than 170 massacres of Indigenous Australians by colonists, as well as half a dozen massacres of colonists by Indigenous Australians. 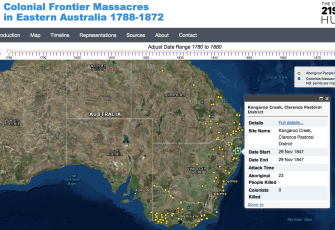 Sites are marked with three stars if they have multiple credible sources, and one or two stars if less. Yellow dots indicate Indigenous people massacred, blue dots are for massacred colonists. Out of respect for Indigenous taboos, because they are now on private land, or to prevent desecration (as has happened in the past), the exact locations of the massacres are not pinpointed on the map.

The only two pre-1800 massacres both took place in Hawkesbury near Sydney, in 1794 and 1795 – with seven Aboriginals killed at either occasion. From 1800 to 1830, the bloodshed is limited to an area in the southeast of Australia now covered by New South Wales – but seems to have been very intense in Tasmania, the island off the island continent’s southern shore.

From 1830 to 1860, Tasmania is almost entirely ‘pacified’, and the violence moves outward from central NSW to the north of the state, and into Victoria. All incidents listed from 1860 to 1880 occur in Queensland, to the north of NSW.

The period Ms. Ryan examines dates from 1780, around the time the First Fleet landed, to 1880, when the colonisation of Australia was largely completed. But her data itself is far from complete: there may have been more than 500 massacres of Indigenous people in all, she thinks.

All massacres marked on Ms. Ryan’s map are located in the eastern third of Australia. The massacres on Indigenous artist Judy Watson’s map also cover northern and central Australia, and are concentrated on the Queensland coast rather than in New South Wales.

Ms. Watson has set up ‘The Names of Places’, a multimedia project seeking to visualise the locations of massacre sites, first shown at the National Gallery of Australia in Canberra. Remembering, discussing and mapping massacres is traumatic, but can also be cathartic. The online map offers viewers the option to add information about massacres that they may know of that are not yet on the map.

The information on specific incidents may not always be as complete as on Ms. Ryan’s map, but the second map may provide a more complete overview of the zones of conflict between colonists and Aborigines.

Ms. Watson hopes to tour with her work across the country in order to gather more ‘massacre stories’ along the way and add detail to her map.

Many thanks to Robert Capiot for sending in this New Yorker article on both maps.

The Youngest, Most Massive Black Hole Is A Puzzle For Astronomy

How do you get so massive so fast? The answer could be a big problem for our standard picture of cosmology.Out in the extreme distances of the Universe, the first […]