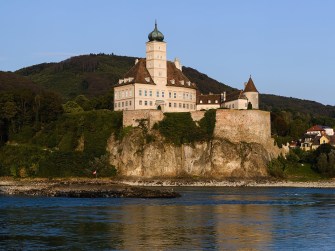 Unless you’re into skiing, double monarchies or “The Sound of Music,” you probably don’t give Austria much thought. Yet everybody’s second-favorite Alpine republic is a locus of many weird and wonderful facts.

If you don’t believe us, check out these infographics produced by @austrianmaps. Here are ten things you’ll now never again be able to un-know about Austria. 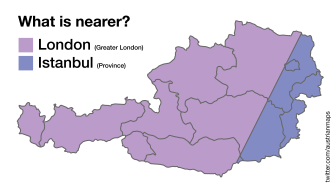 Austria is far from anywhere. Or, comfortably in the middle of everywhere. Which of these two truths rings truer depends on the elasticity of your travel wants (or needs). As this map shows, the Austrian capital Vienna (that’s that circular thingy in the top right-hand corner) is almost perfectly equidistant between the two megacities book-ending Europe in the northwest and southeast.

Other maps show Austria just as snugly halfway between Madrid and Moscow (if you’re into city trips); and Ibiza and Crimea (if you’re more of a beach person). 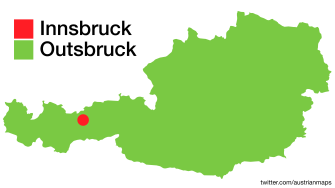 In its mission statement on Twitter, Austrian Maps promises “maps of Austria from moderately interesting to plain terrible.” In order to set the bar at the appropriate height, we get Austria’s version of the ‘Indiana/Outdiana‘ map.

Don’t let this put you off, though: Innsbruck is a lovely city (go check out the Golden Roof, completed in 1500) and close to the Alps (take the funicular Hungerburgbahn from the city centre straight up into the mountains). 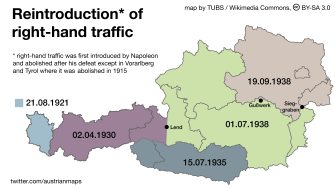 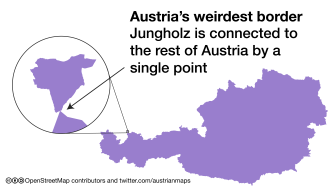 Jungholz is an Austrian town, but it’s surrounded on all sides by Germany. Does that make it an exclave? It would, if it didn’t touch the rest of Austria at a single point – the summit of Mount Sorgschrofen, where four borderlines meet: two German, two Austrian.

Which means Jungholz is a pene-exclave (i.e. an ‘almost-exclave’, just like a peninsula is an ‘almost-island’). Nevertheless, because it can only be reached via German territory, it is cut off from direct access to the rest of Austria, and thus is a ‘practical exclave’.

Because of this, the town has been economically aligned with its Bavarian (and later German) neighbors, but those differences have been mostly subsumed within the European Union. It still maintains both a German and an Austrian post code, though. 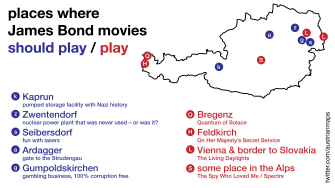 If you’re a picturesque enough country, James Bond will come race your city centers to bits, killing any number of Her Majesty’s foes and scaring the locals witless. Austria is a particular favorite – visited by no less than four iterations of secret agent 007:

And there’s plenty more places to blow up in Austria, the map helpfully suggests. If we were scouting for locations for the next Bond (m/f), the dam at Kaprun and the nuclear plant at Zwentendorf would be on the top of our list, too. 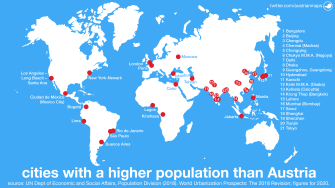 Austria may be a proper country with a flag and a president and all the other trappings of modern statehood, but it’s rather keenly aware of its own diminutiveness. That certainly has to do with the fact that it was once the senior partner in a much grander nation: the Austro-Hungarian Empire, one of Europe’s major powers until its demise following World War I.

With a certain masochism (named after Leopold von Sacher-Masoch, an Austrian), this map points out cities around the world – many not even capital cities – that have a larger population than Austria, which has 9 million inhabitants. 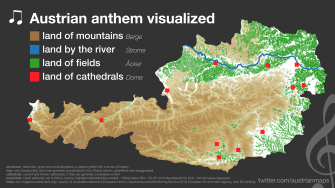 Austria’s national anthem is the last melody written by Mozart before he died. That was the official story, but it turns out it’s too good to be true: the masonic hymn was probably penned by one of Mozart’s fellow lodgers.

What does that cover? Quite a lot, as this map shows, but not all of Austria, not by far. But then, “land of bits in between” doesn’t quite have that anthemic ring to it. 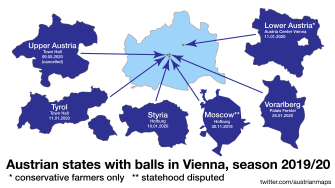 They’re not quite on any Unesco world heritage list just yet, but Vienna’s balls really should be. If not because they’re a spectacular, centuries-old tradition replete with elaborate dresses, genteel manners and shedloads of classical music, then because they are both completely out of place in the modern world – and a wonderful escape from it.

Each winter season, the Hofburg Palace, Vienna’s Rathaus (City Hall), the Vienna State Opera and other locations across town are filled with so many dancing debutantes and scheming socialites that you may be forgiven to think the Kaiser is still sitting on his throne.

In all, Vienna counts around 400 annual balls, many hosted by professional guilds, like the academic association, the medical profession or even the real estate sector. As the map shows, even some states have their own ball: Upper and Lower Austria, Tyrol, Styria and Vorarlberg, and… Moscow.

Of course, Moscow is not an Austrian state. Although there are plenty of moneyed Muscovites who wouldn’t mind. Not all of Russia’s bling gravitates to London. There’s plenty to go around, and some of it likes to dress up and dance. And when that happens, it’s not that hard to imagine that it’s 1815 again, Vienna is the world’s largest congregation of diplomats (there to hammer out the Treaty of Vienna), and there’s still a Tsar on the throne in Moscow. 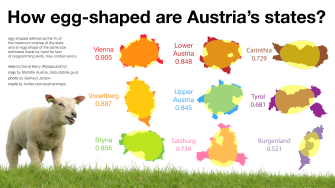 Q: How much fun can mapmakers have? A: As much as their imagination allows. Case in point: this Easter-themed map (hence the bleating lamb) comparing the egg-shapedness of Austria’s various states.

Vienna is the state most overlapping with an egg of the same size (0.905), Elongated Burgenland (a.k.a. Austria’s Chile) is the least egg-like state (0.521).

And what does this teach us? That it can be fun to follow the data, even if it leads you into a blind alley, where you get robbed of your seriousness. Sometimes, a good laugh is worth taking one on the chin. 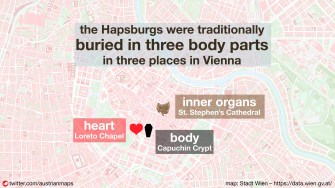 There are still emperors in Vienna, but they’re all dead and buried. However, just going on the number of burial sites, you could think there are three times as many of the dead blighters as there actually were in real life.

That is because, lugubriously, emperors and other Habsburg royals were traditionally buried in three pieces: their bodies in the Capuchin Crypt, minus their hearts (which went to the Loreto Chapel) and also sans their inner organs (which were preserved – if that’s the right word – at St Stephen’s Cathedral).

The spikes in their mouths would have helped them catch squid or fish.
Up Next
Starts With A Bang

The strongest tests of curved space are only possible around the lowest-mass black holes of all.One of the most mind-bending concepts about the Universe itself is that gravity isn’t due to […]