The 2017 edition of the Tour de France started in Düsseldorf. Yes, that’s in Germany. And that is not as strange as it sounds.

The Tour is both the oldest and most popular of the world’s major cycling races. Although the three-weeks-long race traditionally ends at the Champs-Élysées in Paris (1), the initial stage has often, and with increasing frequency, been located outside France.

Those excursions – sometimes followed by one or more stages abroad before returning to la patrie – have so far been limited to eight of France’s close neighbours (the Netherlands, Belgium, Germany, Switzerland, Luxembourg, Spain, Ireland and the UK). An overview by year (start-finish):

Because of its long history – the 2017 edition was the 104th one – the race also known as La Grande Boucle (the ‘Big Loop’, for its course around France), is a goldmine for statisticians and trivia fans. Here are a few nuggets:

Maps are another way to bring Tour stats to life. For the Tour 2017, French newspaper Le Monde has made an interactive map, showing its readers how often the race has passed through their particular département. Moving the slides along the ruler above the map allows you to choose between an all-time overview, or zoom in on a particular period. 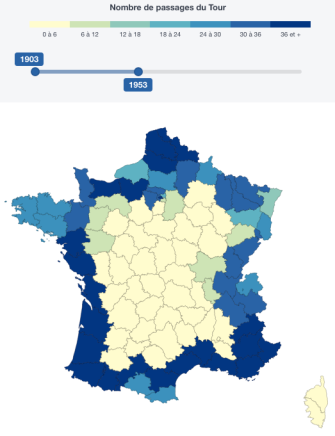 In the first decades of its existence, the Tour generally remained true to the circumambulatory course that its name implies. The stages followed a route near the outer borders of the country, generally staying clear of the French interior.

Brittany was generally also avoided, because of its eccentric location – Bretagne is a peninsula pointing away from France proper, surrounded on three sides by the Atlantic. Also avoided before World War I was Alsace-Lorraine, but for geopolitical rather than geographic reasons: the area was part of Germany. The first Tour passed through the area in 1919, immediately after its re-annexation to France. 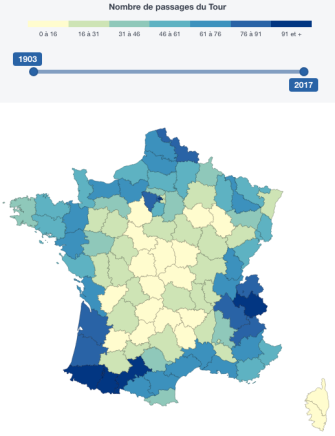 When viewing the map for the entire history of the Tour, the course along the (vaguely) hexagonal edge of France’s borders is somewhat less pronounced, but still some departments are clearly more popular than others. As Le Monde explains, from the 1970s onward, the introduction of demi-étapes (half-stages) and more off-beat routes ensured that the less-well-visited areas of France also got their share of Tour attention.

In 2013, for the Tour’s 100th edition, the race had its initial and second stage on Corsica, the first (and as yet only) time the race ever made it to the French island in the Mediterranean. 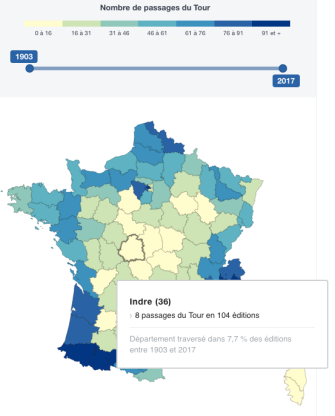 The least-visited mainland department is Indre, unsurprisingly near the centre of the country. The Tour passed through here for the first time only in 1992, but the organisers seem eager to make up for their oversight: Indre has been visited by the Tour 7 more times in the quarter century since.

Paris, the end point of the race and for most of the years until the Fifties also the starting point, naturally is the most-visited place. The mountainous Pyrenees region on the Spanish border is a virtual certainty every year. The most-visited departments outside Paris are all here: Hautes-Pyrénées (100 times), Pyrénées-Atlantiques (98) and Haute-Garonne (97). 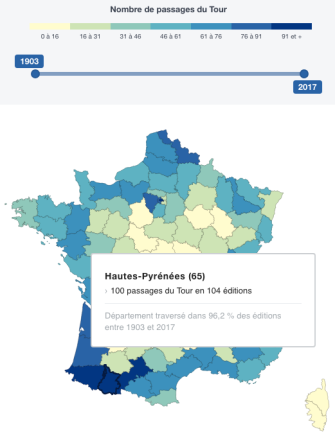 The only other department with over 90 visits is Savoie, in the Alps. Also quite popular, and virtually flat, is the département du Nord. Zoom in on the years from 1950 to 1970, and a block of four northern departments darkens to deep blue, showing one of that era’s three Tour hotspots – the others being the southwest and southeast. 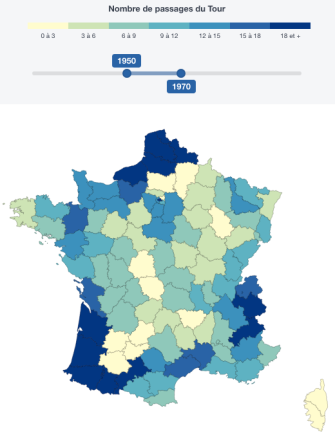 Select the last ten Tours, and it is clear the centre of gravity has shifted southward, with a dark blue zone stretching from the Pyrenees all the way to the Alps. 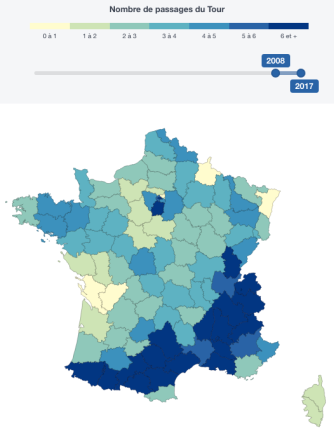 Many thanks to Xavier Bezu for sending in the link to this map, found here at Le Monde.

The whole isn’t greater than the sum of its parts; that’s a flaw in our thinking. Non-reductionism requires magic, not merely science.
Up Next
Starts With A Bang

Seven things you must anticipate for the 2017 solar eclipse

For the first time in almost 40 years, the path of the moon’s shadow passes through the continental United States. This visualization shows the Earth, moon, and sun at 17:05:40 […]