Oceans and deserts are on opposite ends of the humidity scale, yet at some weird level, the extremes are interchangeable. Rolling desert dunes are reminiscent of ocean waves, and as monotonous. Not coincidentally, the main vehicle of those sandy wastes, the camel, is nicknamed the ‘ship of the desert’.

Expanses of sea and sand are equally unfit for human habitation, but parallel deliria bewitch exhausted travellers into thinking otherwise. A fata morgana projects a nonexistent oasis or a phantom city on the desert horizon, while calenture[1] manifests itself to heatstruck sailors as green pastures surrounding their ships. Stepping overboard to their presumed salvation, these unfortunate navigators sink to a watery grave.

The Earth itself sometimes seems unsure whether dunes should be waves, or sea should be land. If the tectonic dice would have rolled slightly differently about 130 million years ago, the Sahara – now the world’s largest non-polar desert [2] – could have been a giant stretch of water, plied by real ships. The bulk of the landmass thus displaced would now be attached to South America, providing Brazil with a giant bulge of land extending halfway to Portugal. So what happened – or rather, what didn’t happen?

Before that giant dice-roll, South America and Africa were joined to Australia, Antarctica and India into a supercontinent known as Gondwanaland [3]. That’s the reason why the Brazilian and West African coastlines still seem like such a good fit – they once did fit together. The first major fragmentation of Gondwanaland occurred on what is now Africa’s east coast, with East Gondwana (India/Australia/Antarctica) splitting off around 180 million years ago. About 50 million years later, South America started moving away from Africa along a fault line roughly in the shape of those two interlocking shorelines – providing Brazil’s coast with its instantly recognisable knee shape, and Africa with its trademark western bulge. 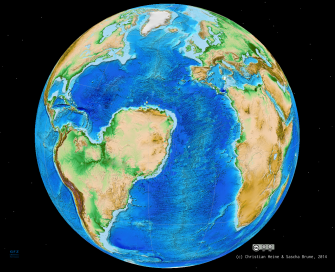 Looking at the region’s tectonic structure, the split as it did happen is puzzling: the West African Rift System shaped the African-South American split from both continent’s southern edges right up to Cameroon (and Brazil’s easternmost cape), but the rift itself then continues northward, from roughly where Nigeria is to Libya. This would have been the logical place for the rest of the split to occur. The result would have been not one Atlantic Ocean, but two distinct bodies of water, separated by Sahara-Brazil: a South Atlantic Ocean, and a Saharan-Atlantic Ocean in the north.

But, in a dramatic plate tectonic twist, a competing rift along the present-day Equatorial Atlantic margins won over the West African Rift, causing it to become extinct, avoiding the break-up of the African continent and the formation of a Saharan Atlantic ocean. So why didn’t West Gondwana break along that fault line? That is the question to which scientists from the GeoForschungsZentrum (GFZ) in Potsdam and the University of Sydney have now found an answer.

A lot of number crunching [4] has explained why: the larger the angle between a rift zone and the direction of the fracture, the more force will be needed for it to manifest itself. Because the West African Rift is almost perpendicular to the westward pull of South America, it could only manifest itself in the southern part of the rift system. Where it met the Equatorial Atlantic Rift system, it lost out to its competitor, positioned at a much smaller angle to the continental drift.

Without that Equatorial Atlantic competitor, the West African Rift might still have been the fault line that separated two continents, giving us a much reduced Africa, and a much enlarged South America.

This map was sent in by Tom Anderson, who offers some fascinating speculations on how this other Earth might have differed from our own:

“Would the presence of a huge desert tacked onto the Amazon Delta have affected the rise of mountain-terracing and jungle-cutting civilisations of South America? Would the Gulf of Morocco, with its sheltered seas stretching from Rabat to Barbados, have been the cradle of a great seafaring culture?”

“Across the water, the corresponding absence of that land on the southern coast of the Mediterranean would surely have altered weather in that area substantially – and perhaps let the Med have substantial tides, unlike in our world. What would that have meant for the fertile crescent and the classical civilisations? Without such a cossetted physical environment, would we have had the golden of ancient civilisation that gave Europe its historical head start?”

“And with Lisbon just three weeks’ sail from Lagos, would the mariners on whichever side have made contact with their respective New World centuries before our Columbus, or would Leif Ericson still have beat them to it?”

For more on the science behind this map, see this Pressemitteilung (in German) on the GFZ website, this feature on ScienceDaily, or this page on Tectonic Waters, one of the researchers’ own blog. Image taken from the GFZ website.

[1] From the Spanish calentura, ‘fever’. Also, more figuratively: burning passion, devotion. Also the name of an album by the Australian band The Triffids. ↩

[2] A desert is a land area bereft of plant and animal life due to low precipitation. Although we immediately think of the hot variety, the world’s two largest deserts are extremely cold: Antarctica and the Arctic, respectively, both about 5.5 million sq. mi (14 million km2) in size. The Sahara is 3.5 million sq. mi (just over 9 million km2). ↩

[3] Named after an area in central India, the ‘forest of the Gonds’, a local tribe. ↩

Most “irrecoverable carbon” is concentrated in these tiny bits of the Earth’s land mass. Can we keep it there?
Up Next
Starts With A Bang

Weekend Diversion: An Optical Illusion For Your Ears

Image credit: © copyright Pathways to Reading, Inc. · all rights reserved, via http://www.pathwaystoreading.com/store/items/. The sounds you hear are affected by what you see. Experience it for yourself! “It is […]