When I was 15, my geography teacher almost ruined maps for me. He stubbornly avoided what fascinated me about cartography: the why and how of those borderlines that cut and curl across the pages of our atlas, of the untold stories contained in those shades that colour the maps, of the mystery of faraway places, each with strange names more fascinating than the boring here and now.

In that boring here and now, the teacher insisted on looking at the world through the eyes of a climatologist: all precipitation charts, isothermic maps and crop yield statistics. Any place that wasn’t as damp and drab as our own was made to sound as if it were uninhabitable. Now, we’d call it climate envy. 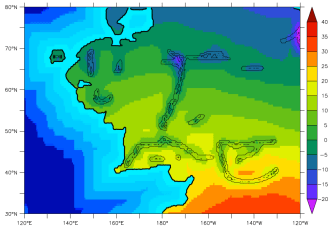 Contours of annual-average modelled temperature in Middle-Earth (in units of ˚C).

Then, we didn’t know any better. As per his depressing instruction, geography became the other dismal science. I still can’t see a storm front move across a weather map without a short,  of existential dread, and the involuntary thought that it’s Monday afternoon, with two more hours of maths to come before the final bell releases us into the afternoon twilight.

The teacher should have relied less on Malthus, more on Tolkien. Perhaps he would have come up with something as delightfully playful and surreptitiously instructive as these maps – depicting the climate of Middle-Earth. For, as the accompanying paper, produced for the University of Bristol, says:

Because climate models are based on fundamental scientific understanding, they can be applied to many situations. They are not designed solely for simulating the climate of the Modern Earth, and, in theory, the same underlying science should apply to any time period in the past.

Even if, as is the case with Middle-Earth, that past is entirely fictional.

The only caveat is that in order to simulate climates different from modern, the user must provide some ‘boundary conditions’ – maps or variables which are not predicted by the model. Examples include spatial maps of the height of the global terrain (topography) and ocean depth (bathymetry), characteristics of rocks and soils, and concentrations of key atmospheric constituents, such as ozone and carbon dioxide (CO2). In addition, key parameters such as the strength of the sun, and the radius and the rotation rate of the planet, also need to be provided to the model. 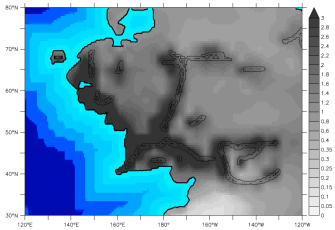 Contours of average precipitation (in units of mm/day).

Tolkien was obsessed with getting the details for his fictional world right, inventing a complex maze of language, history and topography that extended far beyond the scope of his main work, the Ring trilogy. His famous map of Middle-Earth, detailing its shorelines, mountain ranges, river courses and inland seas and deserts, provides enough detail for a simulation of the fantasy continent’s climate. The paper’s author, mentioned as Radagast the Brown[1], explains:

Several aspects of the Middle-Earth simulation are discussed, including the importance of prevailing wind direction for elvish sailing boats, the effect of heat and drought on the vegetation of Mordor, and the rain-shadow effects of the Misty Mountains. I also identify those places in the Modern Earth which have the most similar climate to the regions of The Shire and Mordor. 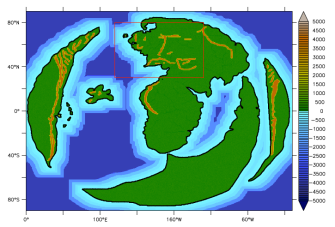 Topography and bathymetry map of Tolkien’s world in the Second Age of Arda. Middle-Earth shown in red rectangle.

Aiming to demonstrate the flexibility of theoretical climate models, the paper also presents simulations of the climate of the Modern Earth (i.e. before the Industrial Revolution) and of the Dinosaur Earth (app. 65 million years ago). But it concentrates on Middle-Earth.

For Middle-Earth, all the spatially varying boundary conditions are derived from maps and manuscripts from the extensive archives in Rivendell [2]. The starting point is a map of topography and bathymetry, derived from a map of the Northern Hemisphere during the Second Age of ‘Arda’ [3].

In the Dinosaur Earth and Middle Earth simulations, the first 50 years of the simulation have a CO2 concentration of 280 ppm, and the remaining years are at 1120 ppm (4× pre-industrial levels). The high CO2 in Middle Earth could be interpreted as accounting for greenhouse gas emissions from Mount Doom.

Some of the findings for Middle-Earth: 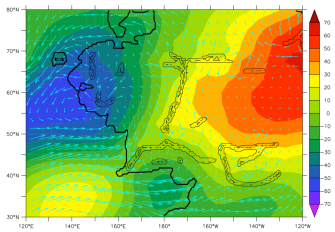 * The annual average temperature in the northern kingdom of Forodwaith [4] is below freezing, while it is over 30˚C in the southerly region of Haradwaith [5].

*East of the Misty Mountains, because the tempering influence of the ocean is further away, ‘seasonality’ increases: summers are warmer, but winters are cooler. Since the latter effect is strongest, average annual temperature decreases.

* The region east of the Misties also is under a ‘rain-shadow’: most of the precipitation falls to the west of the mountains. The prevailing western winds bring in moist ocean air, which cools as it rises with the terrain, eventually condensing into clouds, then drops of rain or flakes of snow.

* Southern Mordor and Haradwaith are subtropical and dry, comparable to the present-day Sahara desert. The principle explaining this is the ‘Hadley Cell’, a system of atmospheric circulation in which air rises near the equator and descends again in the subtropics – because the descending air warms, it can hold more water in vapour form as opposed to liquid form.

* Westerly winds prevail in the Bay of Belfalas and other coastal southern regions of Middle-Earth, while easterly winds dominate the north of the continent. This, according to R. Brown, explains why ships for the Undying Lands in the West would set sail from the Grey Havens, in the north.

* The vegetation predicted by the rainfall and temperature of the climate model for Middle-Earth suggests deserts in the warm and dry regions of the far South, low-lying shrub for most of Mordor, cold desert and shrub along the peaks of the Misty Mountains, the Iron Hills in the North and the Blue Mountains in the West. Most of   the rest of Middle-Earth should be forested. But, as the writer warns, this “does not take account of disturbance of vegetation from its ‘natural’ state, such as forest fires caused (inadvertently or otherwise) by dragons, deforestation by dwarves, the growing of pipe-weed by hobbits, or the wanton destruction by orcs”. The combined effect of these ‘unnatural’ modifications is that a squirrel can no longer travel from the Shire to Isengard by jumping from treetop to treetop.

* Most similar to Mordor’s climate are the climes of Los Angeles and western Texas. In Australia, similar weather can be found in much of New South Wales, or in Alice Springs. Put like that, the weather in the Shire doesn’t sound all that appealing anymore, nor does Mordor sound like that terrible a place. Maybe Tolkien was a bit prejudiced, and all Mordor needs is a PR campaign to set the record straight. 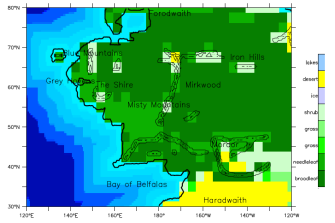 Model-predicted vegetation for the Middle Earth simulation, with the approximate position of some of the places discussed in the text.

Many thanks to Jim McNeill, who sent in this link to the paper at the University of Bristol.

[1] The paper is entitled R.Brown: The Climate of Middle-Earth. Mr. Brown’s co-ordinates are given as: Rhosgobel, nr. Carrock, Mirkwood, Middle Earth. Most of the work, apparently, was done in Bree, as Mr. Brown states in his acknowledgements: I thank the staff at the Prancing Pony, in particular Barliman Butterbur, for providing victuals and beverages while discussing and planning this study. The paper is also available in Elvish and Dwarfish. ↩

[2] Not just Tolkien’s own maps, but also the beautiful Atlas of Middle-Earth by Karen Wynn Fonstad. ↩

[3] Tolkien’s name for the whole Earth, of which Middle-Earth is but a continent. He devised an elaborate etymology for the word, supposedly derived from prehistoric Elvish; the actual inspiration may have been the Afrikaans word aarde (‘earth’ or ‘dirt’) – see also aardvark (‘earth-pig’, similar to ‘groundhog’). ↩

[4] The land north of the Iron Mountains, the name of which translates as ‘North-Folk’ – known for its biting cold despite its relative proximity to the much more temperate clime of the Shire (only 100 leagues to the south). ↩

[5] The name means ‘South-Folk’. It is also known as the Sunlands, and its description by Aragorn as a place “where the stars are strange” suggests that it is close to or beyond the Equator. ↩

We don’t know when or how music was originally invented, but we can now track its evolution across space and time thanks to the Global Jukebox.
Up Next

Studies Confirm that When You Snooze, You Lose

By hitting snooze you are making the wake-up process more difficult and drawn out.