Judas was often portrayed as a redhead. But now the gingers are fighting back 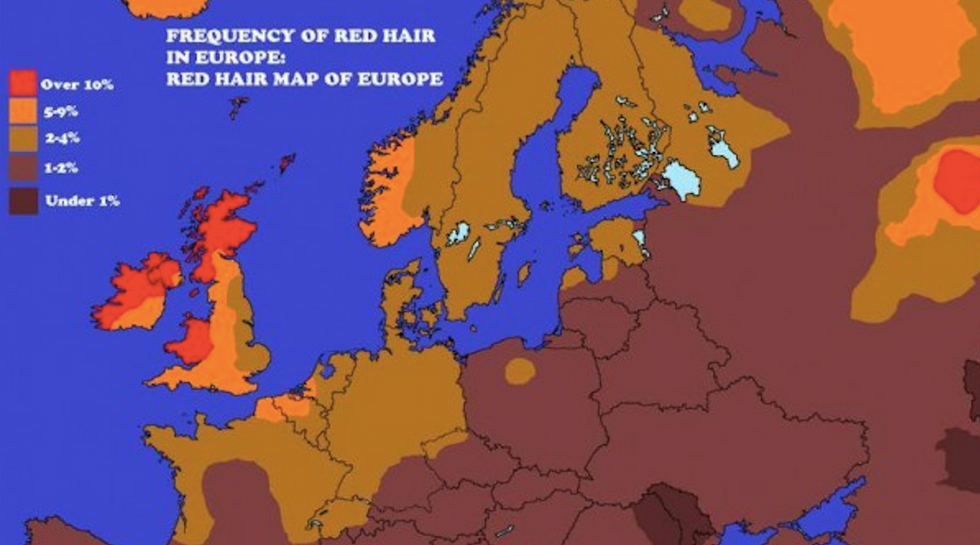 "All hail! The red, orange and pale!", "Ginger and proud!" and "It gets redder": those were some of the slogans on display across Edinburgh on 10 August 2013, in what was probably the world's first Ginger Pride parade.

The march, part of the Edinburgh Fringe festival, was organised by comedian Shawn Hitchins, himself a redhead. "In Canada there's not a lot of redheads, and for me as a really ridiculously gay kid, having red hair only heightened my sense of isolation because nobody looked like me, nobody lisped like me or burnt under the sun like I did", Hitchins told the BBC.

The Canadian chose the right place for his playful display of redhead self-respect. Scotland has the highest proportion of ginger-haired people in the world, with 13% of the general population endowed with red hair. Ireland, by the way, has the second-highest incidence of redheads, at 10%. In both Ireland and Scotland, over 40% of the population carry the recessive gene for red hair, meaning that Irish and Scots are significantly more likely to be red-haired than the average of 2 to 6% for other people of northern and western European ancestry.

But red hair is not limited to the northwest corner of Europe. It occurs regularly, albeit generally with lesser frequency, among Polynesians, Ashkenazi Jews, the Berbers of North Africa, and among the various peoples of the Middle East. Still, with an average occurrence of 1 to 2% across the whole of humanity, ginger is the rarest of hair colours. Which translates to between 70 and 140 million redheads the world over.

Because gingers are such a small, not to mention very visible minority, they have often been an easy target for taunts, discrimination and worse. Historical examples of 'gingerism' date as far back as ancient Egypt, where red-headed men were sacrificed to Osiris. Judas, who betrayed Jesus to the Romans, is often depicted as having red hair. In mediaeval Europe, red hair was frequently considered the mark of a witch, a werewolf or a vampire.

Even in more recent times, redheads were considered behavioural outliers - more temperamental and libidinous than 'normal-haired' people. A 19th-century survey 'proved' that 48% of so-called 'criminal women' (i.e. prostitutes) had red hair, to name but one now discredited example.

That is not to say there aren't any demonstrable peculiarities about redheads. While the average adult has 120,000 hairs on their head, redheads only have about 90,000. Strangely enough, redheads have a different sensitivity to pain than non-gingers: they are more sensitive to thermal pain (heat and cold), but less sensitive to certain other sources of pain (including electrical current). They also require a dose of anaesthetic up to 20% higher than others. And according to some sources, bees sting redheads more than non-redheads - a claim oft repeated but not corroborated anywhere.

So why does red hair even exist? Some scientist speculate that ginger hair (and the often accompanying lighter skin) evolved in dimly sunlit northern regions in order to enhance the body's heat retention and vitamin D production. But other scientists prefer to think of gingers as the result of 'genetic drift': red hair (and lighter skin) occurs in sunnier climes as well, but the reduced tolerance to UV rays means that gingers are less likely to survive and thrive there.

Some of these honorary members of the Red-Headed League are strange bedfellows indeed. It's hard to come up with any other club that would count both Lenin and Churchill among its members - or Genghis Khan and Woody Allen for that matter.

The geographic distribution of redheads across Europe is equally puzzling, as this map demonstrates. There are two ginger hotspots: the Celtic fringe of the British Isles (i.e. Scotland, Ireland and Wales), and an area deep inside Russia, somewhere between Yaroslavl and Kirov.

Is this a sign that Europe was once dominated by redheads, but that they were pushed aside by a migration wave coming from the Middle East - as the other zones of lesser redheadedness seem to indicate? Was it the milk-drinkers who did this? (see #618). Perhaps the habitual taunting of redheads is a distant echo of the ancient victory over the gingerfolk by the blonde and brown-haired invaders, comparable to the seemingly instinctive English reflex to ridicule the Welsh.

But maybe the redheads will have the last laugh. Shawn Hitchins was surprised by the genuine well of ginger activism that his march has connected with: "They've all been in touch with me. It's almost like I've opened a door and realised there was an actual party on the other side. One day this week I was approached by a priest who came over, grabbed my shoulder said 'I love what you're doing with your affirmation march' and gave me two thumbs up."

Could gingers become the next minority clamouring for a separate nation? They already have an annual Redhead Day - held every first weekend of September in or near the Dutch city of Breda. First held in 2005, the Redhead Day draws in thousands of visitors from dozens of countries. Redheads even have their own flag.

So how about a Redhead Nation - a Gingeristan? Scotland would seem like the natural gathering place for the world's redheads; but with a second referendum on independence from Britain a possible consequence of Brexit, the Scots probably don't want to complicate the issue for fear of losing their argument. Ireland as the world's official ginger nation? It would only cause a gingerer than thou fight with Northern Ireland.

Perhaps the most appropriate place to found a land for redheads would be the most mysterious patch of red on this map - the gingerest part of Russia - itself named after a redhead. Considering the endlessness of the Russian steppes, red-headedness is probably the most distinguishing feature this bit of Russia has got going for itself. So, to echo the slogans of two quite different but equally aspirational philosophical traditions: Gingers of the world, unite! Next year in Yaroslavl!

The Ginger Map of Europe found here on James McInerney's Science Exploratorium, a blog about science, society and serendipity. The picture of the ginger flag found here on Everything for Redheads, a website for and by redheads.