Question: Which contest is the nec plus ultra for puzzle fans and quiz aficionados everywhere?

Answer: The MIT Mystery Hunt (MMH), which kicks off every year on the Friday before Martin Luther King Day [1] on the campus of the Massachusetts Institute of Technology in Cambridge, MA.

The ultimate goal of the contest is to find a treasure hidden somewhere on campus. In honour of the very first treasure, an Indian head penny hidden by Brad Schaefer [2] back in 1980, that treasure is still referred to as ‘coin’, although the booty has been at various times a snowglobe, a meteorite fragment, a wooden box, a cd, and a lump of coal.

But what matters not is the prize itself, but which team is clever enough to win it. That team will have the honour of – and a free hand at – devising next year’s Hunt. Hence the increasing complexity of the puzzles. For that first treasure hunt 33 years ago, Schaefer penned a mere 12 ciphers to be cracked. This year’s MMH counted over 150 puzzles, the answers to some of which were part of the questions of larger, so-called ‘meta-puzzles’.

No wonder the 2013 MIT Mystery Hunt was the longest ever, lasting 73 hours.  A clue that the contest is perhaps getting a bit too complex for its own good is in the name of the winning team: [Entire Text of Atlas Shrugged] [3].

Or in the size of the teams – the 2012 winners, Manic Sages, counted over 150 contributors. Which sounds a bit excessive, but is merely provident, as the questionnaire delights in exploiting and combining arcane and obscure fields of knowledge. Solving puzzles could require a familiarity with such specialised subjects as complex integrals, Linear B [4], Vigenère ciphers, and the Enigma machine.

Some questions are more straightforward, though rarely simple. How about this one:  What is the combined weight of all popes throughout history (in kilograms)?

An awareness of maps usually also comes in handy [5], although rarely on its own. What follows surely is one of the most convoluted geographical quiz questions ever devised, requiring a more than passing acquaintance with the not-so-twin sciences of sound and geography.

Spoiler alert: we will mention the answer. If you want to do this one by yourself, please go have your brain teased at this page. For an overview of all MIT Mystery Hunts, please visit this page at the official MMH homepage.

The puzzle whereof we speak dates from the 2006 Mystery Hunt, and is called White Noise. It consists of three sound files, labeled:

Each sounds like metallic birdsong, an eerie premonition of what a vinkenzetting [6] would sound like in the Terminator universe.

You could also pick up on the clue that the files are named after three primary colours, meaning there’s an image hidden in here somewhere, and wring them through a spectrograph, producing a visual representation of the sound – a.k.a. a spectrogram or sonogram. 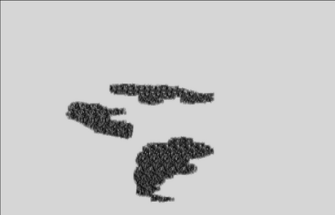 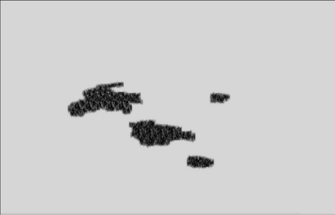 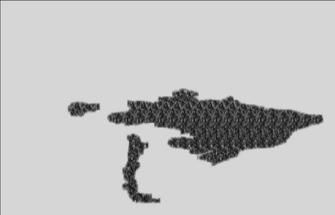 This is what the spectrograms look like (the red, green and blue ones, successively). The aha! moment comes only at the last one, when you recognise the unmistakable shapes of a few South American countries – Chile and Brazil. Or if you’re MIT-smart, you’ve realised from the beginning that these images of three complimentary colours need to be overlaid on each other. Either way, the result looks something like this: 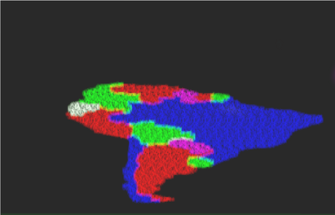 If you’re not MIT-smart, you could rush for the wrong aha! here, and think: The answer is South America! But in fact, the answer lies in that little fleck of land to the continent’s west, not coloured because it appears in all three sound maps: Ecuador!

One clue down, another hundred to go…

More on the genesis of this puzzle here on the MIT Mystery Hunt page. The puzzle was inspired by the Aphex Twin song Windowlicker, the spectogram of which contains the image of a so-called ‘demon face’. 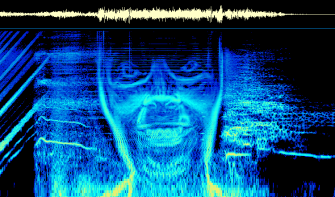 Many thanks to Mako Hill, a Mystery Hunt veteran, for sending in the aforementioned list of map-related puzzles, and the White Noise puzzle itself, which he managed to solve back in ‘06. The demon face taken here from Jarmo Niinisalo’s blog, Bastwood.

[2] Then a graduate student, Schaefer is now an astronomy and astrophysics professor at LSU. Over the years, he has accumulated a few other claims to fame, notably his theory that the Hipparchus star catalog, lost since antiquity, was used to create the Farnese Atlas, a 2nd-century sculpture; and his co-discovery of Dark Energy, for which he and others were awarded the 2007 Gruber Prize in Cosmology.

[3] No, those five words are not their name. The entire text of the eponymous Ayn Rand novel is.

[4] An ancient alphabet used for writing pre-classical Greek, with each sign representing a syllable rather than a letter. It was deciphered only in the mid-20th century. Linear A remains undeciphered.

[5] An overview of map-related puzzles throughout the history of the MMH can be found here at /dev/ joe’s home page.

[6] Literally ‘finch sitting’, this Dutch term describes a Belgian competitive animal sport in which the number of bird calls made in an hour by caged male chaffinches is counted.

Due to arduous competition for limited scientific funds, the pie-in-the-sky ideas that may potentially hide brilliance underneath, are often ignored, abandoned, or simply never undertaken in the first place.