Not too many decades ago, being a child in the western world meant having a license to roam: you spent a large chunk of your free time outside, exploring your surroundings, chasing adventure. This is the Huckleberry Finn mould of carefree childhood – even if you weren’t floating down the Mississippi on a raft, you could easily imagine that you were.

That mould has definitely been broken. A British study called One False Move, investigating the mobility of children, found that the average eight-year-old saw its ‘home habitat’ shrink to one-ninth of its size within a single generation. In 1970, 80% of British kids 7 or 8 years of age were allowed to go to school unsupervised; by 1990, this figure had dropped below 10%.

The result of this gradual shrinkage of children’s habitat, is the effective end of the outdoor childhood. This evolution, by and large underreported, is put in stark perspective by this map. Zooming in on parts of Sheffield, in the north of England, it pictures the differences in size of the stomping grounds of four generations of the Thomas family – each snapped at eight years of age: 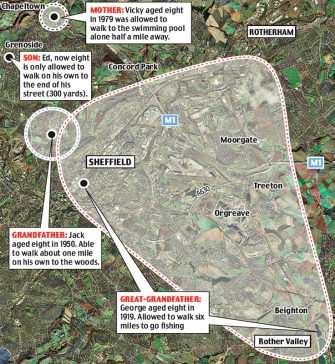 The map accompanied an article in the Daily Mail, which quoted a report warning that the reduced exposure to the outdoors could harm the mental well-being of children.

Ironically, parental fears for their offspring’s well-being have been an important factor in reducing their children’s unsupervised access to the great outdoors: fears of traffic, of predators, of being seen to have their children roam unsupervised.

But the growing list of fears, whether old or new, real or imagined, wasn’t the only factor driving the trend. George Thomas’s childhood home was overcrowded and held little attractions, while his great-grandson has a room of his own, stocked with games and toys, with access to the entertainment provided by tv and the internet.

Perhaps also to blame are the fragmentation of communities, and the concomitant increase in car-dependency. Could it be that the scrambled-egg city of today is a contributing factor to the fact that today’s is perhaps the first generation of children raised in zoo-like confinement?

The Business of Sharing – Sharing as a Business

I have already shared my thoughts on note sharing between students here on Big Think and other outlets. But there is also some sharing going on between teachers and like […]