In the two decades since German reunification, the German government has spent up to €1,6 trillion on upgrading the defunct economic infrastructure of the communist East to match that of the capitalist West. Yet differences, and associated resentments, between the former BRD and DDR [1] persist:

But the gaps are closing. Indicators for health and wealth are slowly converging. And slowly re-revealing that the real divide in Germany is not between East and West, but between North and South. As is frequently the case elsewhere. Curiously, intra-national differences in diet, culture, dialect, and religion often seem more obvious on a latitudinal axis rather than a longitudinal one.

For examples discussed previously on this blog, see #24, listing a few of Europe’s North-South divides; #193, for a discussion of the unofficial ‘border’ between North and South in England; or #317, describing the availability or not of sweet tea as a litmus test for the “separation of northern and southern cultures in the United States.”

And so it goes in Germany, where this map describes some of the borderlines separating Germany’s North from its South. 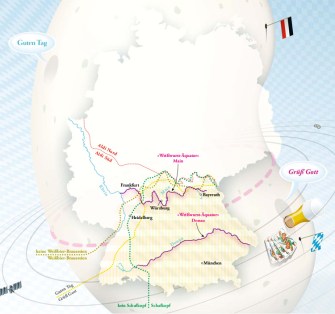 The discrepancy between both versions of the latter equator indicates the elasticity of concepts like ‘North’ and ‘South’, even with all the ready-made cultural stereotypes at our disposal. Or maybe because of them. We never recognise ourselves in the crude types others use to cast us. We have less of a problem applying equally crude characterisations on others, further away. For Hamburgers (the people, not the food), South Germany starts at the Main, while for the Hessians who live there, only Bavaria (and Baden-Württemberg) qualify as ‘South’.

Thus caught up in between different definitions of North and South is a corridor from Frankfurt to the Czech border, where people can switch their allegiance between either side as they please, taking into account internal factors such as personal heritage and preference, or external ones like: Which football team is winning? Which side is ‘cooler’?

Alternatively, they too can construct a cultural identity of their own – the Middle. Germany probably has a lot more equators than these…

This map found here, on the website of Die Zeit, as one of their excellent series called Deutschlandkarte, which has previously been featured twice on this blog (see #358 and #448)

[1] Bundesrepublik Deutschland, a.k.a. West Germany, and  the Deutsche Demokratische Republik, a.k.a. East Germany.

[2] The ‘new federal states’, an alternate description for former East Germany. These states are: Mecklenburg-Vorpommern, Brandenburg, Saxony, Saxony-Anhalt, and Thuringia. This description does not include East Berlin, which was reunified with West Berlin. The Bundesland Berlin thus is only half-new…

[3] The 1919 Treaty of Versailles explicitly forbade Germans form calling their sparkling wine ‘champagne’, so they called it by another, informal name: sekt (from the Latin siccus, ‘dry’). In 1975, the European Court of Justice annulled Germany’s attempts to reserve ‘sekt’ as the term for sparkling wine produced in German-speaking countries.

[4] Lobith is the proverbial locality where the Rhine enters the Netherlands, but man-mande shifts in the course of the river mean this is no longer so. Spijk is the first town on the Rhine, but only its right bank. Millingen aan de Rijn is the first locality where both banks are Dutch. Although technically, because this transnational stretch of water is known as the Bijlandsch Kanaal, the Rhine doesn’t flow across the border at all…

[5] To be precise: towards the remarkable Czech salient containing the towns of Aš and Hranice. This geopolitical peninsula marks the Slavic world’s westernmost extremity. Coincidentally, the Weissbier-Äquator’s western terminus is near metropolitan France’s easternmost extremity, at Lauterbourg, on the left bank of the Rhine.

[6] Short for Es grüss’ dich Gott, ‘May God bless you’.  The meaning of the verb grüssen has since come to mean ‘to greet’ rather than ‘to bless’.

[7] Could it be that Karl Albrecht loved Schafskopf, while Theo hated it?

[8] One of the more shocking pieces of royal trivia to surface in the course of the British Queen’s recent Diamond Jubilee was the informational tidbit that her consort Prince Philip’s nickname for Her Majesty is Sausage.

[9] The hamburger, although possibly named after the North German port city, was probably invented and definitely popularised in the United States.

Photosynthesis is powerful but very inefficient. Humans can improve on this biochemical process to help the planet.
Up Next

At Netroots Nation last week, I attended a panel on Citizens United, the infamous case in which the Supreme Court tossed aside decades of campaign finance laws and ruled that […]