Did you know that almost 90% of the world’s population lives in the northern hemisphere? And that half of all Earthlings [1] reside north of 27°N? Or that the average human lives at 24 degrees from the equator – either to its north or south? Bill Rankin did. Or at least he found out, while producing this fascinating diptych of world maps, plotting population distribution on axes of longitude and latitude.

These maps have been floating around the internet for a few years now [2]. Like barnacled ships and whales at sea, they show their age by the virtual symbionts with which they are encrusted.

Or in this case, some rather opinionated comments.

Some commenters find fault with these maps: Exactly what information do they display? It is not population density, so much as population distribution that is shown. From either of these infographics alone, the precise locations of the densely inhabited centres of the world are not readily deducable.

But I side with those who fall for the abstract beauty of these graphs. Divorced from direct geographical (let alone historical and sociological) context, and further divided by longitude and latitude [3], they have an intriguing quality, inviting us to decode them all over again.

Let’s take the Pop by Lat graph, which shows us the distribution of the world’s population per degree of latitude (i.e. north to south). 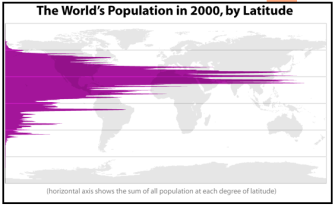 In spite of its huge imbalance, the Pop by Lat map still presents a unified image: a giant, if unevenly sloping mountain. The Pop by Long map shows a much less more diverse set of data. Perhaps not surprising, as the constant of climate is no longer a factor, rather than the accident of continentality (if that’s a word). 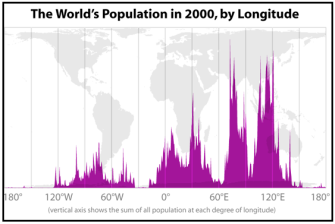 Many thanks to all who sent in these maps, found here on Bill Rankin’s excellent website, Radical Cartography. Do check out his other work, which is fantastic.

[1] Human Earthlings. Sorry, fellow primates (or mammals, vertebrates, animals, or carbon-based life-forms, depending on your willingness to include).

[2] Produced in 2008, based on data from 2000. That is quite a long time ago by now – come June 30th, the first eighth of this new century will have past. That is, if you count the start of the 21st century from 1 January 2000 instead of 2001 (oh, let’s not get into that again). Anyways, with a growth rate of about 80 million a year, we passed the 7-billion mark late last year (the title was granted to Danica May Camacho, born in the Philippines on 31 October 2011). Despite official UN ‘approval’ of Danica’s title, other claimants were born in Kaliningrad, the US, and India.

[3] Previous commenters have rightly remarked that on my trouble keeping east and west (and left and right) apart. This particular form of orientational dyslexia extends to longitude and latitude. I try to avoid the confusion by remembering that a person can be so-or-so many feet or metres long, and that this height is usually measured when the person is standing up. Longitude thus applies to the lines that are vertical on a standard map.

[4] or is that megalopoles? Or does that word describe megalomaniacs from Poland?

Related
13.8
What kind of intelligence is artificial intelligence?
The initial goal of AI was to create machines that think like humans. But that is not what happened at all.
The Present
What’s effective altruism? A philosopher explains
Some effective altruists “earn to give” — they make as much money as they can and then donate most of it to charities.
Sponsored
How to avoid family fights about money
No family is immune to money conflicts, no matter how much they love each other. Here’s what to look out for.
L&D strategy
Best practices for a needs analysis [Templates included]
Conducting a thorough needs analysis requires care, curiosity, and open-mindedness.
Neuropsych
Memory and the benefits of forgetting
Forgetfulness isn’t always a “glitch” in our memories; it can be a tool to help us make sense of the present and plan for the future.
Up Next
Why Commerce Must Be Allowed to Drive Innovation
Despite the bad name commercialization receives in academic circles, it is essential to carry laboratory discoveries, like graphene and stem cell therapy, into their next stages of innovation.