I’m on a bit of a roll here, as far as strange World War II maps are concerned. Here’s another one, again from the German side, found at this page of the website of Calvin College in Grand Rapids, MI. This map is entitled “Deutschland muss sterben” (‘Germany Must Die’), in lettering reminiscent of Hebrew script (implying of course that the Jews are behind this plan).

I can’t find a date on the map, but from the slightly panicky tone in the text, I’m guessing it dates from that phase of the war in which it was becoming quite clear even to the brainwashed German public that the Nazis were going to lose. The four figures at left are the wartime leaders of the Allied nations: Roosevelt (US), Churchill (UK) and Stalin (USSR), with a certain ‘Jew Nathan Kaufman’ thrown in to complete the idea of a worldwide Zionist plot to rule the world, or at the very least wipe Germany off the face of the earth.

“Here is the truth about the 8 Points Programme of Germany’s enemies”, the title of the white text box reads. Those points being: disarmament, expropriation, sterilisation of the Wehrmacht, sterilisation of the civilian population, slavery, dismemberment of the Reich, limitations on residency, abolition of the German language. The text in the red box at the bottom reads: “German people! Now you know what your eternal enemies and opponents have thought out for you – against their plans for your extermination, there is only one possible course of action: fight, work, win!”

Ironic how evildoers always end up accusing their opponents of the very crimes they perpetrate themselves – in this case: the Nazis’ not being able to imagine any defeat that would not equal the systematic extermination of Germany and the Germans. The map shows in thin lines the pre-war borders, and in thick black lines the supposed plan to annihilate Germany by letting the neighbours each annex their share of the Fatherland.

Poland in actual fact did move westward after the war, but not as far as this map shows.

The Czechs contented themselves with regaining Sudetenland after the war, and didn’t march into Austria, Saxony and Silesia, as shown in this map.

Unless my eyes are very mistaken, in this scenario even the neutral Swiss seem to be grabbing their little piece of Germany and pre-war Austria.

And the French gobble up most of southern Germany, up to and including the entire state of Bavaria, making France a neighbour of ‘Czechia’.

Belgium seems to use the post-war confusion to annex Luxembourg and southern parts of the Netherlands, as well as a band of German territory along its border.

The greatest winner would appear to be Holland (i.e. the Netherlands), which would gain the most territory relative to its pre-war size by annexing most of northern Germany, giving it the seaports of Bremen and Hamburg, and access to the Baltic.

Denmark would move south a bit, annexing most of Schleswig-Holstein (see this earlier post about the definitions of Jutland). 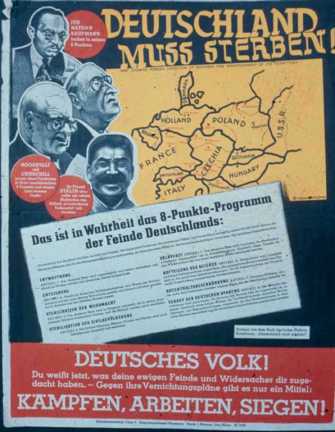 Related
Hard Science
Some earthquakes last for seconds, others for minutes — and a few for decades
What do you call it when the Earth shakes for three decades?
Sponsored
What childhood “money story” is shaping your financial behaviors?
Here are the signs that you inherited “money anxiety” from your parents.
The Present
The “maritime Indiana Jones” who salvages shipwrecks now wants to tow icebergs
Simple physics makes hauling vast ice chunks thousands of miles fiendishly difficult — but not impossible.
Neuropsych
Inside the brains of aging dogs
In a citizen science project, thousands of pet dogs are helping scientists to understand what happens to memory and cognition in old age.
Neuropsych
The most common source of awe might surprise you
It’s us.
Up Next
Strange Maps
49 – Czechoslovakia Threatens Germany (1934)
Another propaganda map dating from just before World War II, but this time from the Nazi-German side. One of the first victims of fascist agression was Czechoslovakia, dismembered at the […]