The New Year of 2011 brought little cheer to the flood-infested coastal plains of Queensland, on Australia’s eastern shore. Over 200,000 flood victims had to be evacuated from or remained cut off in 20 towns in an area larger than France and Germany combined. Many more weeks of high water were predicted. The disaster, which had claimed three lives so far, was now centering on Rockhampton. The coastal town was surrounded by the rising waters of the Fitzroy River.

On January 2nd, Britain’s Daily Mail newspaper published a map showing a few other towns hit by the raging flood: Emerald, Theodore and Bundaberg. The map also included the unaffected cities of Brisbane and Sydney as points of reference, and an inset of a general map of Australia, offering further clues as to the flooded area’s location: halfway between the states of New South Wales and Capricornia. Just a second: Capricornia? Where’s that? 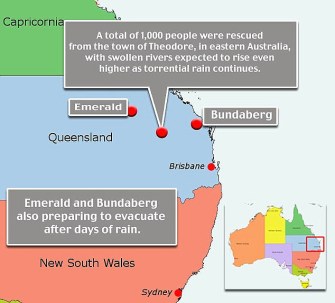 Nowhere – yet. There is no state of Capricornia, but it does figure in the long and varied history of proposals for new Australian states. At present, Australia is constituted of only six states (1). But the country’s territorial history is much twistier and turnier than that small number suggests. Territories appeared and disappeared frequently, and changed shape and name, often placing now-familiar names in strange places (2), or attaching strange names to now-familiar shapes (3).

When compressed in time, as by this animation, Australia’s territorial evolution seems haphazard, perhaps reflecting a trial-and-error approach by the colonial (and afterwards federal) authorities to dealing with the singular challenges posed by the island-continent’s great size, relatively small population, and general impassability.

For all the to-ing and fro-in in its territorial history, Australia was never home to a colony, territory or a state called Capricornia. That such a state only exists in the realm of possibilities makes its appearance on this newspaper map all the more curious.

Capricornia is one of several names for the separatist project of some inhabitants of Northern Queensland (4). One need only look at the location of that state’s capital – Brisbane, near Queensland’s southern border – to sense that those living in the far north may feel excluded from the centres of power.

As is wont to happen in such cases, some disgruntled northerners (who are also outnumbered by southerners) have, throughout the decades, agitated for a separate state. This proposed state, usually including all of Cape York Peninsula (Australia’s ‘right ear’), is variously called Far North Queensland, North Queensland, or Capricornia.

The latter name derives from the Tropic of Capricorn (5), passing through Queensland at roughly the intersection desired, one supposes, by those who seek it to be the southern border of their new state. As it happens, the Tropic of Capricorn lands in Queensland in the vicinity of Rockhampton, now so afflicted by the aforementioned floods, and, further inland, the town of Emerald, also mentioned on the map.

This is curious: it would mean that the state of Capricornia as indicated on this map would not include the Tropic of Capricorn, or even use it as its southern border. One clue to the origin of this map might be in the location of the red dot on Capricornia’s coast (as seen on the tantalisingly vague overview map of Australia in the bottom right hand corner). This has to be Townsville, one of Northern Queensland’s main cities. Could this have been the hometown of a cheeky Ozzie intern at the infographics desk of the Daily Mail?

Many thanks to Steven Lyndon for sending in this map, found here at the Daily Mail website.

(1) These are Queensland, New South Wales, Victoria, South Australia, Western Australia and Tasmania. There are three mainland territories: the Northern Territory, the Australian Capital Territory (the latter thus being comparable to Washington DC), and Jervis Bay Territory (separated from New South Wales to provide the ACT with access to the sea, but now itself separated from the ACT – no idea why; the territory is tiny, as is the number of its inhabitants, and the ACT remains the de facto authority). In addition, the Australian federal parliament directly administers a handful of overseas islands, including Christmas Island and Norfolk Island.

(2) In 1838, a proposal to divide Australia into ten states provided for a state on the continent’s northern shore named Tasmania. A map of that proposal was discussed earlier on this blog (see entry #130). A much more straightforward summary, seemingly designed to instil irredentist feelings in the inhabitants of New South Wales, can be found at post #21 of this blog.

(3) The present-day state of Western Australia started out as the Swan River Colony; Tasmania’s first name as an entity separate from New South Wales was Van Diemen’s Land.

(4) Other movements to create new states for the Australian Commonwealth include a proposal to separate the New England region from New South Wales; to create a separate state for the Aboriginal population (in parallel to Canada’s creation of the Nunavut region); and to constitutionally attach New Zealand to Australia, either as one state, or as two (one for each main island).

(5) The Tropic of Capricorn marks the most southerly latitude at which the Sun will appear directly overhead, at the Winter Solstice. After this, the Sun’s zenith moves north again, and the days in the southern hemisphere start shortening. The Tropic of Capricorn is currently situated at 23° 26′ 16″ South. Its slight migration – at present, north by about 15 metres (just under 50 feet) a year – is ruled by a complex set of variables, among which the small, periodical changes in the Earth’s axial tilt. The zone between the Tropic of Capricorn and its northern counterpart, the Tropic of Cancer, is known as ‘the tropics’, a term that has nothing to do with the region’s higher temperatures, but with the Greek word tropos, which may mean a turn, or a change (as in the place where the sun turns around).

Nowhere is the sensemaking power of design more evident than in pictograms, signage and icon design. A new effort from Mozilla and rockstar designer Aza Raskin aims to bring this […]