Between 1934 and 1959, The Three Stooges produced 190 short films for Columbia Pictures. While all exhibited the Stooges’ trademark slapstick humour, gaining them a cult following, only one of the zany troupe’s shorts is of interest to the admittedly rather narrow field of curious cartography.

Malice in the Palace (1949) is set in a fictionalised, funnified Middle East, where Moe, Shemp and Larry run the Cafe Casbah Bah. Two of their customers, Gin-A Rummy and Hassan ben Sober, are plotting to steal a giant diamond from the tomb of Rootentooten. However, when they discover the diamond is already in the possession of the Emir of Schmow, they start yammering and are kicked out of the Cafe. The Stooges then decide to retrieve the diamond themselves, using a map left behind by the unsuccessful plotters.

MOE to SHEMP and LARRY: “Now, here, study this map closely!”(Moe is now showing Shemp and Larry the route they are going to take to get to the castle as Moe is using a knife to lay out their travel route.)MOE to SHEMP and LARRY: “We start here at Jerkola, down the Insane River, over the Giva Dam, through Pushover, across Shmowland, to the stronghold of Shmow.”

The map, shown briefly in the film, is of a continentful of countries with strange names and odd shapes, clearly designed to look and sound ‘foreign’. What does this ‘Map of Starvania’, designed merely for the purpose of unsophisticated comedy, unconsciously reveal of mid-20th-century America’s attitudes towards the exotic, the un-American? 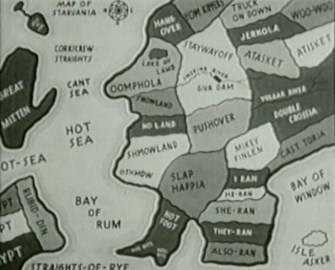 Firstly, the name: Starvania. It continues the tradition of using vaguely latinate toponyms as shorthand for exotism. Previous examples include Ruritania, others are Syldavia and Borduria (all mentioned in #461). Intriguingly, by referring to ‘starvation’, this toponym may demonstrate a mental equation made by Americans between distance from their Land of Plenty and the incidence of famine (the greater the former, the likelier the latter). Considering that the Second World War had only recently ended, this might have indeed been a prevalent attitude in the US at the time.

Secondly, the shapes: The Great Mitten floating around to the left of the main continent is of course a reference to Great Britain (*). The main continent is a profile facing left, attached to the bottom is an Italy-shaped boot called Hot Foot. Italy being the Old Country of so many Americans must have figured prominently in any brain-storming session on ‘foreignness’.

Some of the foreign-looking names actually sound quite familiar; these are wordplays such as Isle Asker (“I’ll ask her”), Rubid-Din (“rub it in”), Cant Sea (“can’t see”) and the aforementioned Giva Dam (“give a damn”). Other plays on words, sounding less foreign, are Bay of Window (“bay window”), Corkscrew Strai(gh)ts (a corkscrew being the opposite of straight), and Hot Sea and Tot Sea (“hotsie totsie”, for something or someone pretty).

Other names are extended riffs on actual foreign toponyms: I-ran, He-ran, She-ran, They-ran and Also-ran. Another set consists of Egypt, You-gypt and We-gypt (on the left, partly outside this image). The first set works a bit better than the second one, but both reflect an unfamiliarity with these foreign placenames.

A further set of names reflect directly negative references, sometimes with the flavour of contemporary street vernacular: the Vulgar River (just north of Double-Crossea, on the right), the Insane River (running through Staywayoff, at the centre of the map), Jerkola, Slap-Happia, Hangover, Pushover.

Least but not last, there are a few names that seem to reflect nothing much more than map-filling noise: Woo-Woo and Oomphola. Or the rudimentariness of these names might be understood to reflect on the lack of sophistication of the places they denote.

A clever play on words is Mikey Finlen, referring both to Finland and to a ‘Mickey Finn’ – slang for a drink spiked to incapactiate its imbiber (hence “to slip a mickey”). Less clever: Lake of Lamb (“Leg of Lamb”, supposedly). Other names are self-explanatory, inexplainable or unreadable due to low image quality. A recent, more legible makeover of the map exists, but with some obvious discrepancies. 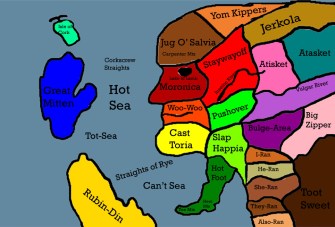 Many thanks to William Angiolillo for sending in this map. Colour version found here on DeviantArt.

*: and not, as first mentioned, to mitten-shaped Michigan, which wouldn’t make much sense on a foreign map – thanks to ‘Mike from Jersey’ for clearing that up (19 Aug 2021).

Engaging in a brief mindfulness exercise made people who identified “I/me” words 33% less likely to volunteer.
Up Next
Strange Maps