With Justice and Piety, reads the Latin emblazoning this 17th-century illustration, a map that shows Bohemia as a stylised rose. If that region is in bloom, the map suggests, it is precisely by the application of those virtuous qualities.

They were not randomly chosen. Iustitia et Pietate was the personal motto of Leopold I (1640-1705), archduke of Austria, king of Bohemia (1), and prince, duke, lord and landgrave of much, much more.

Leopold was elected Holy Roman Emperor in 1658, a title that had been in his Habsburg family for centuries. However, realising the increasing weakness of this institution (2), Leopold instead shifted his political energy to the consolidation of his Austrian, Hungarian and Bohemian dynastic territories. Vienna was to become the focal point for this newer empire, which would eventually become the Austro-Hungary Double Monarchy.

This map illustrates that ambition to consolidate, showing Bohemia as a Habsburg power flower. It was first drawn up by the Silesian cartographer Christoph Vetter (b. 1575, d. 1650), copper-engraved by Wolfgang Kilian (in 1668), finally to be included in Bohuslav Balbin’s Epitome historica rerum bohemicarum, a national history and geography of Bohemia from antiquity to the present day (i.e. 1677).

It shows, in the aforementioned botanical shape and form, the 18 administrative subdivisions of Bohemia, starting with the Districtus pragensis (i.e. Prague) at the centre. Leaves peeking out from the actual flower indicate neighbouring regions: Palatinatus bavariae pars (Bavarian palatinate), Austriae pars (Austria), Moraviae pars (Moravia) and Silesiae pars (Silesia) – the one on the top is illegible, as are other leaves nearer the root of the flower’s stem. 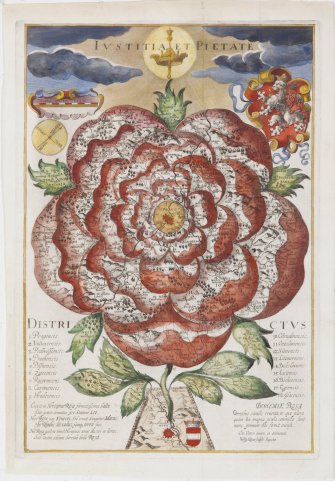 That stem firmly connects the flowering Bohemian rose to the fertile soil of Vienna, the Habsburg’s political centre. For those still not clued in to this none too subtle form of cartographic propaganda, the Latin text at the bottom explains:

“There grew a graceful Rose in the Bohemian woods, and an armoured lion standing guard next to her. That Rose had grown out of the blood of Mars, not of Venus. […] Do not fear, lovely Rose! There comes the Austrian. […] The Rose of Bohemia, bloody for all the centuries, where more than 80 battles were waged. She has been now drawn in this form for the first time.”

It is rather common in curious cartography to anthropomorphise countries, as previously shown on this blog in entries #141 (Europe As A Queen), #171 (John Bull Bombarding France With Bum-Boats), and #278 (Ice Coffee Town), to name but a few. Morphing maps into allegories vegetal rather than animal is rarer, though not unheard of. The most famous example is the delightful map of The World as a Cloverleaf, discussed earlier in #87.

This map was sent in by Alissa Fowler.

(1) Bohemia together with Moravia constitutes the historical ‘Czech lands’; both now form the Czech republic.

(2) Voltaire quipped that the Holy Roman Empire was neither holy, nor Roman, nor an empire. Its origins were in Charlemagne’s imperial coronation on Christmas Day 800 AD, and it lasted until Napoleon abolished it in the early 1800s. Throughout that millennium, this ‘first Reich’ covered most of Germany and much of the neighbouring countries, but never constituted anything more than the fiction of unity.

NASA was dangerously cavalier about the dangers of the shuttle launches.
Up Next
Strange Maps