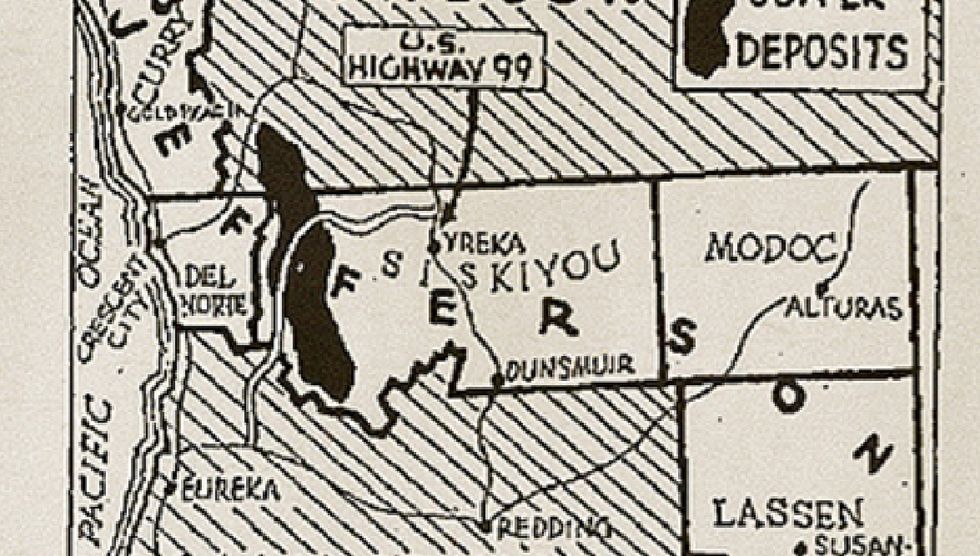 Step up and meet Jefferson, the 49th state of the Union, this pamphlet announces. The proponents of this U.S. state-to-be, made up of California’s northern parts and southern bits of Oregon, seem to have been firm believers in the strategy of the fait accompli, for their handbill states:

If you preserve the map above, you may be acquiring an historic piece of americana to pass on to your descendents. It’s one of the first ever drawn of the new, 49th “State of Jefferson” which 45,000 secessionists of Oregon and California hope to carve out of their states.

But the fact of Jefferson was never accomplished, the secession never consummated. Unbeknownst to the jeffersonists, the tide of history would soon turn against them. Very soon: note the date on the pamphlet – Dec. 6, 1941. One day later, a Japanese sneak attack would destroy the American Pacific Fleet.

This meant, among a great many other things, no more time for frivolous secessionism. And so the idea of a state named for Thomas Jefferson was killed off. This time by the Japanese aggression, but hardly for the first time.

The lost state of Jefferson is a star-crossed, but particularly persistent project in American history. From the middle of the 19th century, the name of the third U.S. president has been attached to at least three unsuccessful attempts at state-building.

The proposal pertaining to the area portrayed in this map was first formulated in October 1941. As is often the case with border areas, both sides of the California-Oregon line felt neglected by their respective state governments. It was in fact the dismal condition of the state roads on either side of the border that pushed Gilbert Gable, mayor of the small coastal town of Port Orford, to announce the creation of a new state.

Gable’s secessionism first and foremost was a wake-up call for both state governments, but it developed a momentum all of its own. The city of Yreka, seat of Siskiyou County in California, was proclaimed the ‘provisional capital’ of the future state. In November, a ‘constitutional assembly’ met in town to provide the secessionist project with a name (Orofino, Bonanza and Discontent were mooted, among others) and a governor (Yreka judge John C. Childs). The fledgling state was even endowed with a flag.

A ‘Citizen’s Committee’, armed with hunting rifles, occupied a stretch of U.S. Route 99, handing out pamphlets proclaiming Jefferson’s ‘independence’ (possibly similar to the pamphlet which is partially shown here). The mainly good-natured incident – the rebels promised to “secede every Thursday until further notice” – was recorded by the main newsreel companies. But the light-hearted item lingered long enough in transit and in cutting rooms to be pushed off the news agenda by Pearl Harbor.

The third incarnation of Jefferson did not have a very fixed circumscription. ‘Secession’ was only (half-)seriously entertained by the Oregon county of Curry and the California counties of Del Norte, Siskiyou and Trinity (not included on this map; south of Siskiyou’s western half). This map also includes the more reluctant secessionists of Modoc and Lassen counties. Other proposals extend Jefferson’s borders further to the south and north.

This map was taken here from the Flickr page for Lost States, a project which is also Facebook group and a blog, but mainly a beautiful and very entertaining book. Some of the state projects in the book were discussed earlier on this blog and in the Strange Maps book (e.g. Sequoia, #147).

(1) lands newly acquired by the United States were often first administered as Territories, under the direct jurisdiction of the federal government. Territories could be either  incorporated (i.e. part of the U.S.) or not, and organised (i.e. with a government recognised by the U.S. Congress) or not. Thirty-one of the present 50 states were previously territories, including the last two to gain statehood, in 1959 (Alaska and Hawaii, which were both organised and incorporated). The U.S. continues to administer several territories, all outside the continental U.S. – these are either organised but not incorporated (e.g. Guam, the U.S. Virgin Islands, and Puerto Rico), or incorporated but not organised (Palmyra Atoll, an uninhabited nature reserve). A handful of uninhabited islands and atolls in the Pacific and the Caribbean are U.S. territories that are both unincorporated and unorganised.

(2) a curious provision in the annexation of Texas by the US in 1845 stipulates that up to four new states may be carved out of the Lone Star state, which then would gain admission to the US automatically. Over the years, several plans to that effect have been mooted – obviously with no effect (as yet).