Tatooine is a desert planet in the Star Wars universe. Its main claim to fame is the local Skywalker family, and more specificially Anakin and Luke Skywalker, who play major roles in the sci-fi epic. As such, the planet makes an appearance in most films of the franchise.

The planet orbits a binary star system, and is in turn circled by three moons. The twin suns contribute to Tattooine’s harsh, arid desert climate. Yet the planet once had oceans and jungles, until the Rakata ‘glassed’ the planet during an attack.

The planet is thinly populated by four sentient races: human settlers, often moisture farmers; Hutts, a race of criminals who once ruled the planet; the Jawa, a race of pygmy-like scavengers and traders; and the Sand People, a.k.a. Tusken Raiders, a tribe of hostile nomads. The latter two races are Tatooine natives. Both hide their true appearance by fully cloaking themselves. It is hinted at that they share a common ancestor – and that this might be humankind. 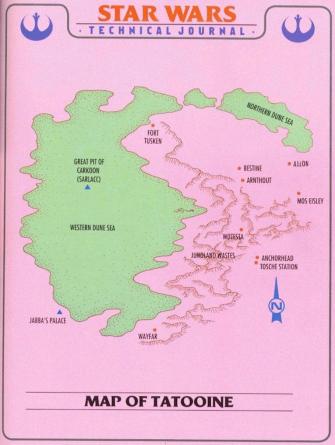 Less lawless than in the Hutt era, Tatooine remains unruly and largely untouched by the authority of the Galactic Empire. Its small population is scattered across the planet, with only a few population centers of note.

In the Star Wars saga, the planet originally was not named. George Lucas intended to name it Utapau, but retrospectively named it after the Tunisian town nearest to the first movie’s desert set. Tataouine is the French transliteration of the place’s Berber name, which means Water Springs. Like on its fictional namesake, the inhabitants of Tataouine live in underground cave dwellings to keep cool in the blazing heat. The planet Tatooine’s three moons, Chenini, Guermessa and Ghomrassen, are named after Berber settlements around Tatouine. 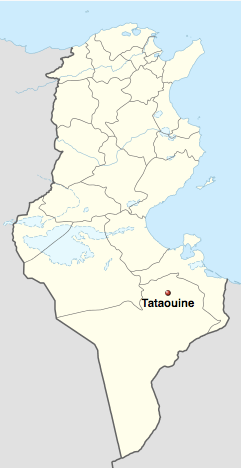 For the very first time, an AR contact lens was worn on the eye of a human subject. And it has about 30 times the pixel density of an iPhone.
Up Next
Strange Maps

44 – The World According to Dubya

Post #38 of this blog showed a spoof map of the world, supposedly according to Ronald Reagan – the avuncular 40th President of the US, an icon of conservatism to some, […]