With an army numbering a mere 7,000 soldiers and an official policy of neutrality, the Irish Free State’s attitude at the outbreak of the Second World War was that of a very nervous bystander. While covertly providing the Brits with some intelligence and assistance, the overt goal throughout what was called the Emergency was to remain non-involved enough to prevent both a British and a German invasion. If it could, the Emerald Isle would have taken on, chameleon-like, the colour of the surrounding ocean waves.

This map shows the next best thing: dissuasive cartography. Its actual title is Cautious Cartography, as it appeared in the August 1940 issue of the Irish satirical magazine Dublin Opinion. The map purports to portray Ireland in as unappealing a perspective as possible. The text accompanying the map explains how cartography may be at least partly to blame for Europe’s misfortune:

Feeling that the present unrest in Europe may have been largely caused by the well-intended, but highly mistaken policy pursued by countries of boasting about their natural advantages and attractions, a policy which has had the not unnatural result of exciting the cupidity of other countries, our Grangegorman Cartographer has designed the above map of Ireland, which is calculated to discourage the inhabitants, much less strangers. The trouble is, he feels, that, even as depicted, the country still looks more attractive than the rest of Europe.

Maybe because the rest of Europe was busy going up in flames. But still, who would want to invade a country wracked by rheumatism, plagued by cholera and diphteria belts (not to mention ‘inspectors’ and pipers’ bands)? The interior of Ireland is further disfigured by bog and swamp, alternating with swamp and bog, a great quagmire and a great Meath desert. 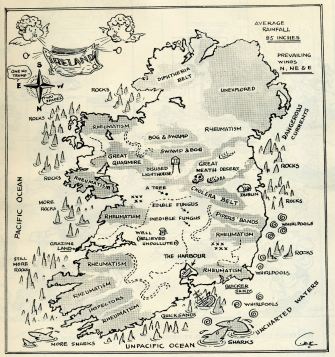 Ireland’s ploy worked. By remaining as inobtrusive as possible, the Republic was able to remain out of the war (although 50,000 Irish volunteers did take up arms on the Allied side).

Many thanks to Cormac for sending in this map.

The most common element in the Universe, vital for forming new stars, is hydrogen. But there’s a finite amount of it; what if we run out?
Up Next
Strange Maps