Amikejo, the World's First (and Only) Esperanto State

Amikejo was located in Neutral Moresnet, a geopolitical anomaly that managed to survive for a whole century after the Congress of Vienna. 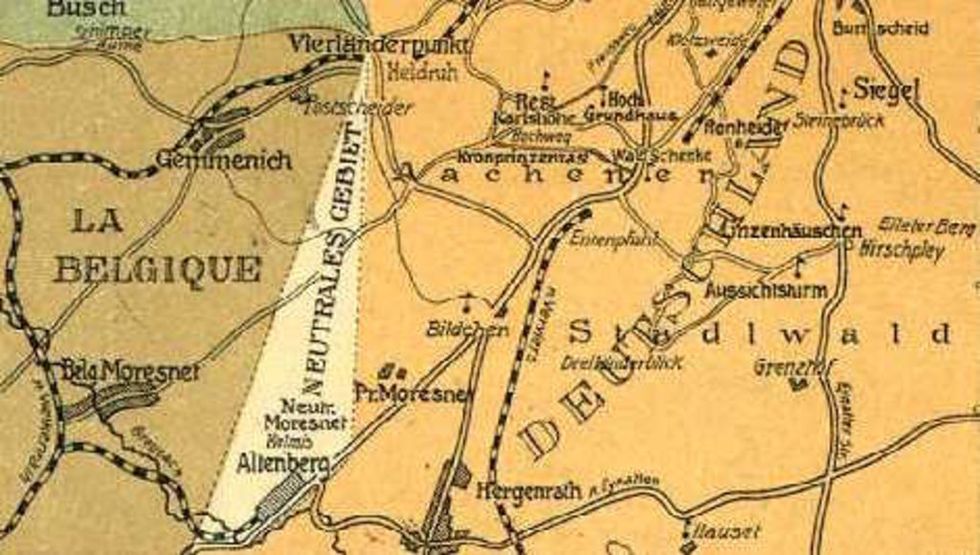 The story of Amikejo is a fantastic piece of obscure cartographic and cultural history: Amikejo was the world’s first and only state based on the ideals of the Esperantist movement. It was founded in a tiny (3,5 km²), wedge-shaped area that for a hundred years was an easily overlooked ‘neutral zone’ in Western Europe.

To find the general area where this neutral zone once was, take a map of Europe and find the point where the Netherlands, Germany and Belgium meet. This Drielandenpunt (‘trinational point’ in Dutch) even today is a bizarre enough place in itself:

This is where it gets really weird: this Drielandenpunt once was a Vierlandenpunt (‘quadrinational point’) – the only one in the world ever, to my knowledge. Please correct me if I’m wrong! I’ll briefly summarise the history of the place to give you some background to the map accompanying this post. Please visit Cees Damen’s thorough and beautiful website for more background.

1815: Napoleon is defeated at Waterloo. The victorious powers convene in the Congress of Vienna to re-draw the map of Europe. The United Kingdom of the Netherlands was constituted as an anti-French buffer state, consisting roughly of the three present-day Benelux states (Belgium, Netherlands, Luxemburg). Its border with the German state of Prussia was left undefined in the area of Moresnet, because of an important zinc mine claimed by both powers.

1816: in a separate treaty concluded at Aachen, the Netherlands and Prussia decide to divide Moresnet into three areas, one controlled by the Netherlands, one by Prussia and one ‘neutral’ area in between (where the zinc mine was located), to be administered by a Dutch and a Prussian commissar.

1818: the boundaries between the differert areas are demarcated, leading to a ‘trinational’ point at Vaalserberg, where the Netherlands and Prussia share their border with ‘neutral Moresnet’.

1856: due to the economic good fortunes of ‘Vieille Montagne’, the local zinc mine, the number of inhabitants of Neutral Moresnet grew fivefold from 500 (in 1850) to more than 2.500 in this year. Living in neutral territory had pluses and minuses. These ‘neutrals’ could escape military service in the surrounding countries, for example, but were stateless when they traveled ‘abroad’.

1863: Wilhelm Moly, a German doctor, moves to Neutral Moresnet. He becomes very popular as a general practitioner, and gets involved with the local ‘Verkehrsanstalt’ (traffic organization), issuing stamps that seem to indicate an aspiration for independence.

1906: Moly and Gustave Roy, a French professor – both keen Esperantists – decide to establish an Esperanto state in Neutral Moresnet. Esperanto being an artificial language developed some decades before by L.L. Zamenhof, a Polish doctor. This language, devoid of nationalistic connotations, was supposed to transcend the linguistic divides crippling Europe.

1908: a great demonstration is held in Neutral Moresnet, attended by the whole population, advocating the establishment of an Esperanto Free State to be called ‘Amikejo’ (Esperanto for ‘Friendship’). The local band played a tune which would be the national anthem for Amikejo. It’s unclear whether this gathering constituted the official formation of Amikejo, although some newspapers at the time reported the event as such.In the mean time, tensions had been building between Belgium and Prussia/Germany over the neutral territory (which had outlasted its usefulness since the depletion of the zinc mine). The locals petitioned Belgium for annexation, following some strong-arm tactics by Prussia/Germany.

1919: The Treaty of Versailles, following World War One, officialised the annexation of the territory to Belgium, thus ending its neutral state. It’s unclear what happened to ‘Amikejo’, although it’s likely its high-minded idealism was simply swept away by the brutal forces of war…

If you read German, here is an interesting contribution by the grandson of Dr Molly.