For two centuries after 1640, the official Japanese policy towards the outside world was known as sakoku (‘closed country’), by which both Japanese leaving the country and foreigners entering it could expect the death penalty.

Although in practice not quite as harshly absolute as that, isolationism prevailed until American commodore Matthew Perry’s Black Fleet sailed into Uraga harbour in 1853, forcing Japan to open up, first to commerce with the U.S., later to trade with other western countries.

This Japanese world map circa 1850, gives an impression of the country’s view of its place in the world on the verge of its forced reintegration into the international community. It is an intriguing mix of foreign knowledge and native perspective. 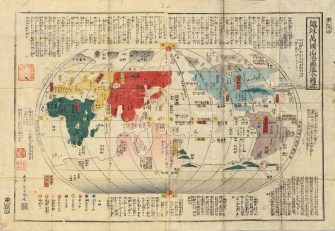 The Japanese archipelago is placed self-confidently at the centre of the map, banishing Europe from its usual central place to a marginal one, at the western edge. The American continent is shoved to the map’s far eastern side.

The continents, each assigned a different colour, are generally in the right position vis-a-vis each other, but their contours are very poorly rendered, as if the map was not drawn directly from a contemporary western example, but via a system of Chinese whispers.

However flawed it may be, what this map proves by getting the general gist of the world’s geography right,  is that Japan was not entirely cut off from outside knowledge. Indeed, during the whole period of sakoku, severely restricted but nonetheless significant trading and other contacts were maintained with a handful of privileged partners.

The Dutch, who were allowed to maintain a foothold on the small island of Deshima, were Japan’s main source for western scientific knowledge, including cartography. This allowed Japan to keep up with the general development of geography, even if sometimes, as in this case, only very generally.

Many thanks to An Olaerts for providing me with this link to a series of antique Japanese world maps.