Yet Portugal is loath to think of itself as a small country. Or at least it was, before its overseas empire collapsed. Built up over centuries of exploration, trade and colonisation, the Portuguese Empire once spanned four continents. The jewel in its crown was Brazil, but Portugal lost control over its South American colony in 1822.

As the legend to this map indicates, all these territories together added up to an area larger than (Continental) Spain, France, the UK, Italy and Germany put together, explaining why, as the title claims, Portugal não é um país pequeno. If that sounds a bit defensive and self-justifying, that’s no coincidence. 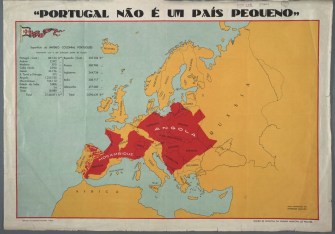 In the early 1970s, Portugal languished under a dictatorship determined to hold on to the vestiges of its former colonial glory. The increasingly costly and impopular wars against freedom fighters in Portuguese Africa eventually led to the overthrow of the regime, in a virtually bloodless military coup in April 1974, the so-called Revolução dos Cravos. This Carnation Revolution would lead to a swift liquidation of Portugal’s overseas assets and ultimately to democracy within Portugal.

Portugal’s African possessions were all granted independence. Indonesia took advantage of the turmoil “back home” to take over East Timor (India had forcibly annexed Goa etcetera in 1961). Only Macao remained in Portuguese hands, until 1999, when mirrorring Hong Kong’s reversion in 1997, it was reintegrated into China. The Azores and Madeira, ethnically and geographically closest to the mother country, are still part of Portugal.

This map was sent in by Nuno D. Alves, who came across it in history class, when studying the pre-revolutionary dictatorship. “It is a propaganda map, suggesting that our country was important. Portugal’s orientation towards its colonies, away from Europe, “was used to justify the isolationism of the regime, and its neutrality in World War II (…) [The map] shows the Portuguese colonies that remained by that time superimposed on a map of Europe, going on to compare surface size with the main European countries. All in all very silly.”

Different small country/large empire combo, same attempt to use cartography to defuse inferiority complex. This is a map of the Dutch East Indies, many times larger than the Netherlands, which was the country’s colonial overlord until the country declared independence as Indonesia in 1945. Overlaid on the map of Europe, it stretches from far in the Atlantic to deep into Russia. 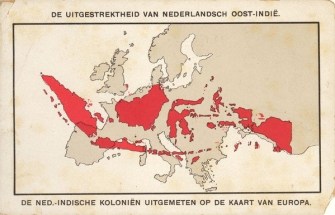