There is no satisfactory explanation that I know of for the higher than average incidence of lame word-play in the names of hair salons. Some examples in the Anglosphere include: British Hairways, Shear Excitement, Fringe Benefits, Comb One Comb All, Locks of Fun, Mane Man, and – he came, he saw, he coiffed – Julius Scissor. There are literally dozens of similar examples, some of which are documented on the Hairdressers With Funny Names pool on Flickr.

What makes this phenomenon even more intriguing, is the fact that it transcends linguistic and cultural boundaries. German-language hair salons too apparently also feel the need to use silly word-jokes for a name. This map shows three of the most frequently used lame puns for hair salons in Germany.

Firstly Haarmonie (a play on Haar, German for ‘hair’ and the German word for harmony). And then, writes map submitter Ron Garrett,  “Haareszeiten, a play on Jahreszeiten (German for ‘seasons’). Haargenau is a real word that means ‘exactly’, like the English expression ‘to a hair’.”

Mr Garrett found this map here on the website of Die Zeit, the German newspaper, which mentions that “it used to be that hair salons were named after their proprietor, e.g. Friseursalon Gabi. But more recently, hair salons have been choosing names that are more original. Or seem more original. This map shows how much of the territory is covered by these three word-plays. Haarmonie is the most popular of these ‘original’ names.”

“Remarkably, these names are more current in the area around Stuttgart or in Nordrhein-Westfalen than in Berlin or Munich. What goes for original in Stuttgart, has been superseded in Berlin. There, the pressure to be original is so great that hair salons can barely afford to name themselves like all the others. Hair dressers in the Berlin districts where the young and ironic live have since reverted to calling themselves simply Friseursalon.” 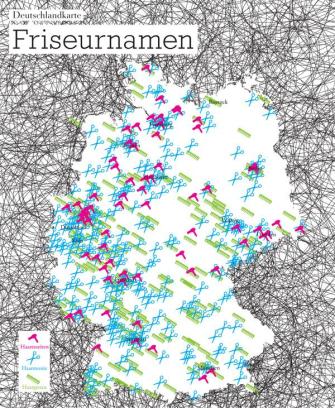 Got a strange map? Let me know at[email protected]om.