On 27 October 1951, the US magazine Collier’s devoted an entire 130-page issue to the theme of “Russia’s Defeat and Occupation, 1952-1960; Preview of the War We Do Not Want.” The cover showed an American soldier in a helmet emblazoned with the US and UN flags, reading MP (Military Police) Occupation Forces.

Collier’s Magazine devoted 60,000 words to the hypothetical aftermath of a Third World War, which would start in 1952 and in which the US and UN would defeat the Soviet Union. The articles described, among others, an “A-Bomb Mission to Moscow”, in which the famous broadcaster Edward R. Murrow described  from an ‘embedded’ perspective the hypothetical B-36 raid that destroyed the Soviet capital.

In the introduction, Collier’s proclaimed that it had chosen this theme:

“To warn the evil masters of the Russian people that their conspiracy to enslave humanity is the dark, downhill road to World War III; to sound a powerful call for reason and understanding between the peoples of East and West — before it’s too late; to demonstrate that if the war we do not want is forced upon us, we will win.”

According to Collier’s scenario, World War Three would start with an attempted assassination of Yugoslavia’s leader, Marshal Tito (a communist but also a maverick, for refusing to align his country with the Soviets). This would lead to an uprising in Yugoslavia and to its invasion by (Kremlin-loyal) Warsaw Pact armies. It is not clear from the magazine cover how the US/UN victory would work out on the ground.

The map behind the soldier shows the UN flag flying over Moscow, with the Eastern Bloc countries, the Baltic Soviet republics and Ukraine (but not Belarus) marked as ‘occupied’. Does this leave the rest of the Soviet Union as ‘unoccupied’, or ‘less occupied’, while Moscow nevertheless is under US/UN control? 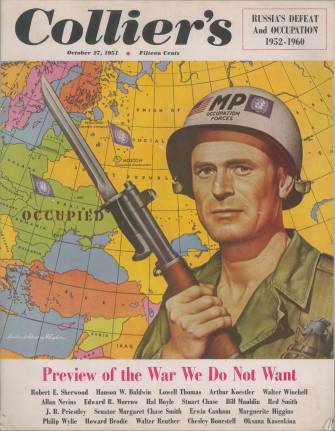 Thanks to Ilya Vinarsky for sending in a link to this map.