In 1938, Germany was not a good place to be a Jew. While some German Jews might still have hoped the anti-semitism of the Nazi regime would somehow blow over, those who had the means to flee the country did so – if they found a place that would have them. The Freudenheims did, and managed to leave Berlin for Montevideo.

Their young son Fritz, 11 years old at the time, documented their traumatic odyssey in a map composed in bright colours, cheerfully entitled: Von der alten Heimat zu der neuen Heimat! (‘From the old home to the new home!’) He documents the Freudenheim family’s locations as far back as 1925, before he was born himself. Africa, with only one port of call, is portrayed as relatively small, while South America is more defined (all countries are shown) but detached from North America. Of the European countries, Germany looms largest; the trains that take the Freudenheims on their travels inside the country would soon be used for more sinister transports. 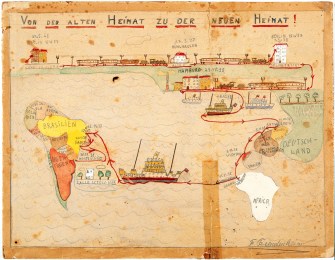 And what became of young Fritz? We don’t know, but there is some evidence that he lived a long and happy life. A bit of googling learns that a Fritz Freudenheim, born in 1926, died in São Paulo, Brazil in 2008. Fritz was the husband of Irene and the father of Irith and Andrea Michele.

This map was sent in by Liam Flanagan, who saw this map at the Jewish Museum in Berlin.

After 10,000 years of civilization, have we figured out what virtue is?
Up Next
Strange Maps