“Your map showing the electoral divide in Ukraine (#343) is quite interesting, and put me in mind of a similar one that I saw last year, that prompted me do a bit of map research,” writes David G.D. Hecht. “If you look at the Wikipedia article on the Polish legislative elections of 2007, there is a map there similar to the Ukrainian one. I looked at this map and thought, hmmm…where have I seen this divide before? Looks very familiar. This isn’t just some urban/rural, professional/worker, white-wine-and-brie/beer-and-sausages thing!”

Mr Hecht did some overlay work, and came up with this remarkable fit: “The divide between the (more free-market) PO and the (more populist) PiS almost exactly follows the old border between Imperial Germany and Imperial Russia, as it ran through Poland! How about that for a long-lasting cultural heritage?!?” How about: amazing, bordering on the unbelievable? 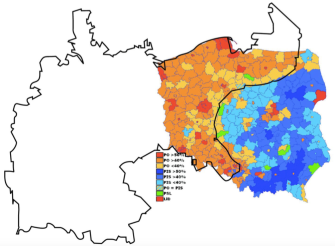 The Ukraine map isn’t the first example on this blog of electoral cartography showing older cultural divides. Map #330 demonstrates a correlation in the Southern US states between areas of intense cotton production in 1860 and counties voting for Obama in 2008. And map #108 shows the regional divides at issue in France during the 2007 presidential election. I am reminded of German artist Heinrich Böll (b. 1917 in Cologne), who once said that he could still sense the cultural difference between both banks of the Rhine, once the border between the Roman Empire and the barbarian hordes across the river.

The erasure of older borders doesn’t mean they totally disappear — the new map is a palimpsest, even if it sometimes has to be held up to the UV light of an election for those old, overwritten boundaries to reappear. But it is quite strange for an old border like the one between the Kaiser‘s Germany and the Czar‘s Russia to reappear on a Polish election map as recent as 2007. Poland has moved around the map of Europe quite a bit, most recently in 1945. Poland basically moved west, losing its eastern part to the Soviets and gaining the eastern part of Nazi Germany.

The losses and gains of territory were accompanied by huge movements of people, in numbers probably not seen since the Völkerwanderung at the collapse of the Roman Empire. Expropriated Germans moved west, as did Poles, who took their place. In the context of that momentous re-organising of the region’s ethnic composition, the palimpsest of the Imperial border, cutting Poland in half, seems improbable. And yet there it is, in an almost perfect fit…

Many thanks to Mr Hecht for producing and sending in this overlay map.